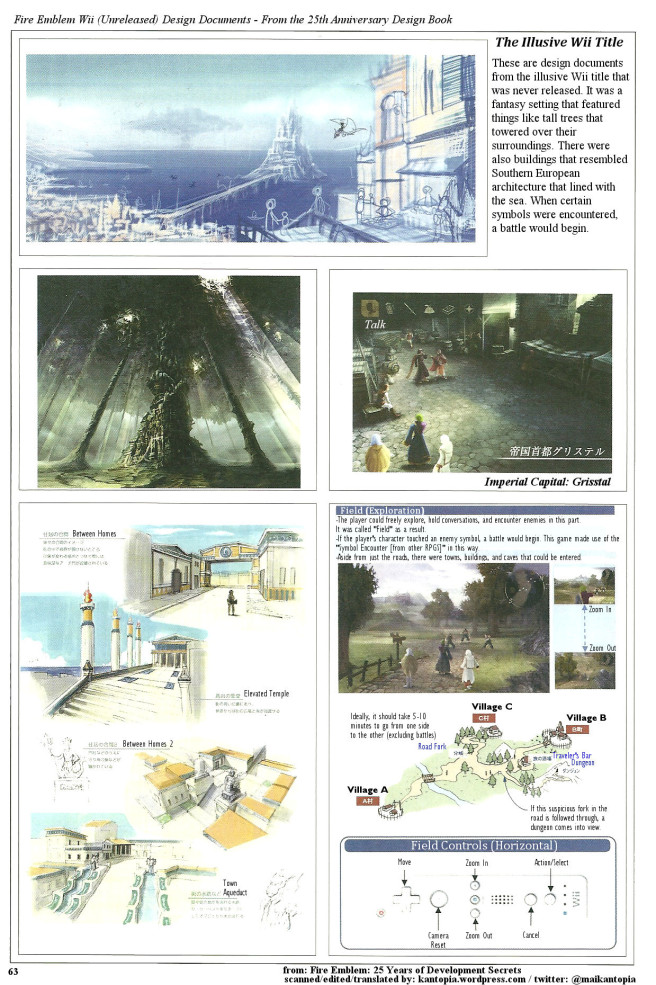 Earlier this month, a scan appeared from the Fire Emblem 25th anniversary book showing an in-development photo of what was thought to be Radiant Dawn. Fresh information has since surfaced indicating that this was to be an entirely new title/experiment all together.

This mystery game was in development for Wii after Radiant Dawn had shipped. However, due to poor sales stemming from previous console entries, Nintendo and interior staff were trying to create “something new” and appeal to the broader audience brought in by the Wii and DS.

There was a lot of talk about negative feedback that was received after the release of Radiant Dawn, wasn’t there?

Narihiro: The staff at Nintendo and others were saying things like “With such results, do not release another title on a home console.”

What was the truth of the situation?

Narihiro: It was true that the game did not sell too well, but I’m not quite sure what was meant by “do not release another title on a home console.” But, it changed our way of thinking. And so from then on, we assumed that it would be necessary to simplify the game on a home console in order to gain wider appeal. During the Gamecube era, there were those at Nintendo who wanted the game as a console release in order to increase the amount of hardware sold. However, Mr. Iwata’s new policies came into play and led to the massive hit that was the Nintendo DS and Wii –which expanded the general gaming audience.

…So after the completion of Radiant Dawn, we began to make an experimental game for the Wii. The result was the illusive unreleased “illusive” title for the Wii.

…It was an FE game where you would take a large group of people with you much like Pikmin. For a long time we diligently continued to develop this experimental project, steadily learning new things. In the end, though, the final blow to our motivation was the fact we did not really have an aim or objective, which really killed the spirit of the project. It was at this time where Maeda came forward and expressed “I want to be the director.”

You can find more from the interview over on kantopia.