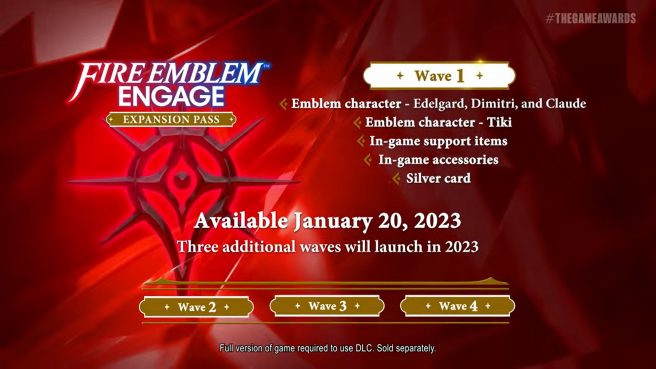 Fire Emblem Engage is getting an Expansion Pass, Nintendo and Intelligent Systems have revealed.

A total of four waves are planned. The first round, scheduled for January 20, will include the Emblem character Edelgard, Dimitri, and Claude, Emblem character Tiki, in-game support items, in-game accessories, and a silver card.

Three other waves will launch throughout 2023. Specific dates have not yet been provided.

Here’s some information about the Expansion Pass:

《Additional Emblems》
・Emblem Bracelet for Edelgard/Dimitri/Claude will be added (three Emblems that dwell in one bracelet).
When a unit wears the Emblem Bracelet, they will receive stat boosts (including a 20% increase in earned EXP).
Note: You will receive the bracelet immediately after viewing the event on Lookout Ridge in the Somniel.
・Emblem bracelet for Tiki will be added.
A unit wearing the bracelet will have improved stat growth when leveling up.
Note: Bracelet becomes available after clearing the newly added Divine Paralogue map.

《New Accessories》
Receive at the Boutique in the Somniel.
・Rare Set, Frilled Band, Big Ribbon, Single Earring, Round Specs
Note: You will receive these the first time you visit the Boutique after Chapter 6.

《Silver Card》
While you possess this item, in-game purchases in the Armory and Item Shop will be discounted by 30%.
Note: You can find this item in the newly added Divine Paralogue map.

Note: Details to be revealed later.

Note: Details to be revealed later.

We have a trailer for the Fire Emblem Engage Expansion Pass below.