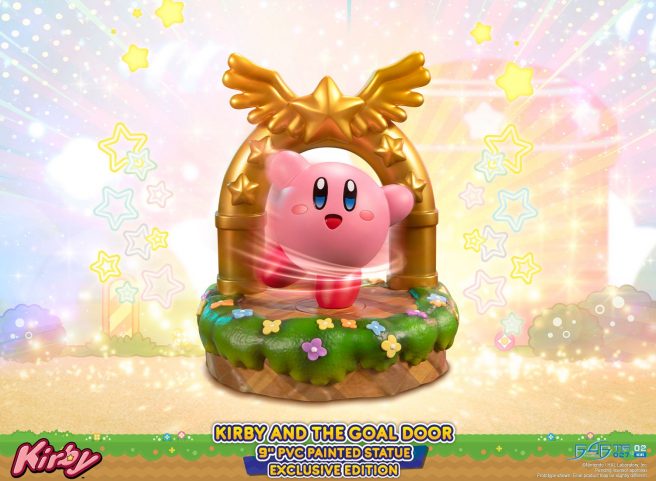 First 4 Figures is expanding its offerings of Nintendo products once again. Revealed today is the Kirby and the Goal Door statue, which should ship later in the year.

Below is all of the relevant information:

First 4 Figures is proud to introduce their latest PVC statue collectible, Kirby and the Goal Door.

This is the first statue to release in the all-new Kirby PVC lineup.

At the end of each stage is a Goal Door that Kirby and his pals enter to play a Goal Game before proceeding to a new level. Kirby does a quick twirl and strikes a very cute pose just before they enter the Goal Door. That entire scene with Kirby by the Goal Door and striking a pose is where this statue’s concept is inspired from. And the base replicates the environment of the very iconic Dream Land Stage, which has a checkered-pattern pathway and a grassy and flowery terrain.

The Exclusive Edition of this statue features touch sensors that can trigger motion and music! Touching the blue flower on the right-hand side of the base will activate the twirl that Kirby does just before he strikes a pose, while the orange flower just below that will activate the song that plays after finishing a Goal Game!

Don’t miss out on this limited-time offer exclusively on First4Figures.com!

Kirby – Kirby and the Goal Door (Exclusive Edition) comes with the following:

We also have the following promo video:

The Kirby and the Goal Door statue is expected in Q3 2021. Pre-orders are now open here.