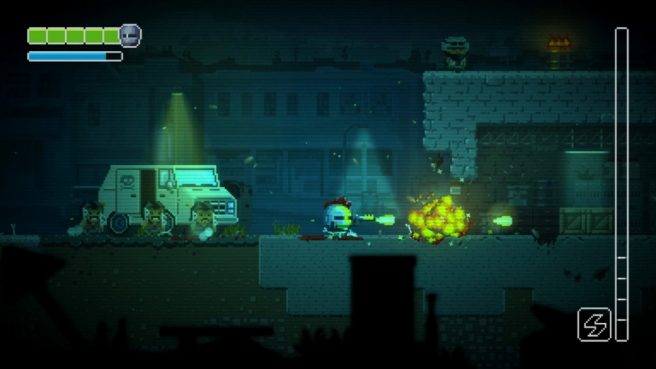 Flippin Kaktus arrived on Switch this week, and those that want to get a look at the game can do so with new gameplay. A total of 20 minutes of footage is available.

Below is some information about the “action-driven vendetta”:

When the vicious Calaveras drug cartel raids his home, Kaktus breaks bad in a hardcore journey to save his foster family. Reveal the dark side of the wacky 80s punk and flip the switch to obliterate anyone in his path!

Break BAD…
When you fight alone against the vicious cartel, the end justifies the extreme. Switch Kaktus into the RAGE mode to make raiders get what they deserve. Fuel up with tequila and adrenaline-pumping substances to annihilate your enemies into oblivion.

…or keep a COOL head
If you don’t want to find yourself in an open fight with the hostiles without a plan, you can always try to sabotage their actions! Strategize and challenge your reflexes: dodge bullets, equip various armor, set ambushes and traps and make use of the interactive environment to get rid of the thugs. Forklift lowrider? It’s on!

In ADDICTIVE gameplay
Never get bored with endless tactical possibilities (and explosions)! Excel in action by mixing stealth and dexterity with rage-fueled killing sprees to dominate your opponents.

…and rockin’ HARD!
Enjoy a uniquely composed fusion of authentic mariachi, rock and synthwave, explore artist-tailored graphic novel and connect all the dots in this thrilling desperado odyssey.

And here’s the gameplay for Flippin Kaktus: