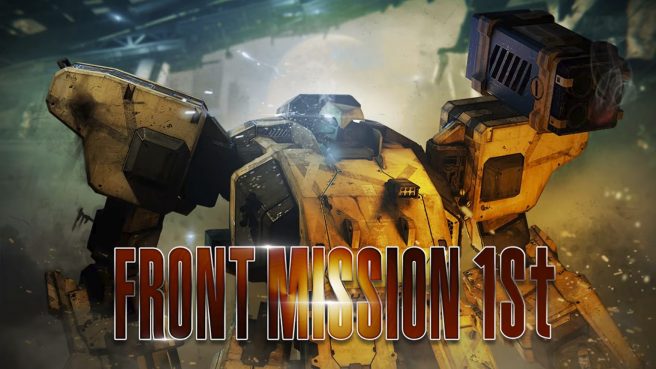 In the year 2090, the world’s conflicts are fought using giant war machines called Wanzers. Huffman Island, the only place where the Oceania Cooperative Union (O.C.U.) and the Unified Continental States (U.C.S.) share a land border is a hotbed of conflict.

An O.C.U. reconnaissance platoon led by Captain Royd Clive is assigned to investigate a U.C.S. munitions plant. They are ambushed by U.C.S. Wanzers, triggering a series of events that plunges the whole island into war. Royd’s fiancée, Lieutenant Karen Meure, goes missing in action.

Discharged from the military, Royd sets out to investigate what happened to Karen. His quest leads him closer and closer to the conspiracy behind the incident and the powers that orchestrated it.

With dozens of characters to meet, its mature story, and non-Manichean protagonists, Front Mission is the classic of a tactical Japanese RPG genre, finally available worldwide.

12 years have passed since the second Huffman conflict. The impoverished People’s Republic of Alordesh has been suffering a severe economic decline ever since the war ended. In June 2102, soldiers of the Alordesh Army rise up and, led by Ven Mackarge, declare independence from the O.C.U. (Oceania Cooperative Union).

Ash, an O.C.U. soldier, manages to survive the ensuing battle, but Alordesh is completely overrun by the Revolutionary Army. Ash and his surviving teammates infiltrate Alordesh’s chaotic underground in an attempt to escape the country. However, they soon discover that there is a huge conspiracy behind the coup.

In Front Mission 2, the perspective switches between three characters: Ash, Lisa, and Thomas, creating a worldview that goes beyond a simple dichotomy between good and evil.

A trailer for Front Mission 2: Remake is available below.