Posted on July 5, 2020 by Brian(@NE_Brian) in Interviews, Switch eShop 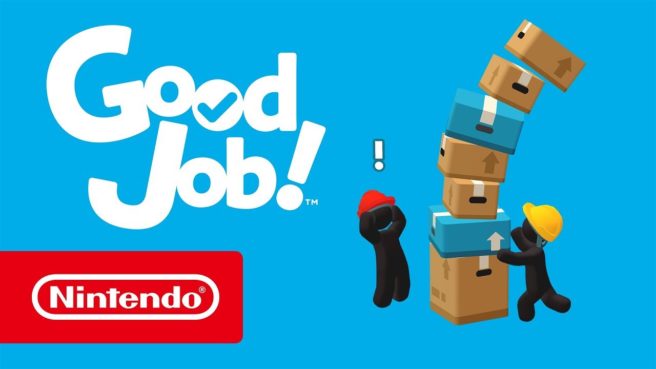 Nintendo has made it a habit of teaming up with smaller studios on different Switch games over the past few years. Snipperclips got the ball rolling for the system’s launch, followed by The Stretchers in late 2019. Good Job!, the latest instance of these partnerships, just released a few months ago.

Nintendo partnered with Paladin Studios on Good Job!, which features a slew of objectives and puzzles to complete across a slew of office-themed levels. Many players have been enamored with the game and we’ve been quite curious about how the project happened, so we caught up with both companies to learn more. Producer Takao Nakano from Nintendo of America, director Masataka Takemoto from Nintendo Co., Ltd., as well as lead producer Robert Abercrombie and game director Coen Neessen from Paladin Studios all shared more about the title’s origins, its art style, how the two sides ended up working together, ideas that were ultimately scrapped, and more.

How did the idea for Good Job! come about? What inspired the project?

Neessen: Roy, the original creator of that concept, always wanted to make a game set in an office. The office environment had a certain appeal. It has strict rules, but at the same time makes you want to be mischievous from time to time. Do things you aren’t supposed to do. In real life people don’t actually do that, but I think most people can relate to that feeling.

We also wanted to make a game that was accessible for just about everyone. We wanted to create a game we could play together with our youngest kids, but also with our parents who were not used to controllers at all. The office environment seemed like a great match as it’s a relatable environment to everyone.

How long was the game in development for?

Robert: With all the phases of development combined, the start-till-end time lies around the 2-year mark.

Good Job! has an interesting look in that it’s simplistic, but also colorful and memorable. How’d the team ultimately settle on this type of art style?

Neessen: Thank you very much. Right from the start we kind of found the minimal art approach. We had a fairly simple character design that was similar to what you see now in Good Job! now. We really liked it and it reminded us of a warning or street sign character. It felt like a perfect match with what the game was about, being mischievous in an office. It needed refinement, but the overall direction was there.

Finding the colorful approach that you see now took us much longer to establish. We tried out a lot but it proved to be really difficult to find something that’s both playful and still keep that office vibe. Earlier concepts were much less colorful, except maybe for the areas surrounding the level. It wasn’t until we figured out that we should make the environment itself vibrant as well that we really landed the style that you see in the game now.

Takemoto: If I remember correctly, when I first saw a prototype, characters were stick-figures and buildings and objects were all in black and white. Because it’s a prototype, the graphics were very simple, but I really liked that simplicity. So, as we continued with the development, we requested them to “keep it simple” yet “make sure it won’t look plain,” even though we knew that’s a very challenging request.

How did the partnership with Nintendo come to be?

Abercrombie: The founder of Paladin (Derk de Geus) had been trying to get his foot in the door for around 10 years, and fortunately Nintendo wanted to proceed with one of our pitches and that was the start of Good Job! development.

Nakano: It’s been a long time since we first met Paladin. I think it was one of those game events somewhere. I’ve played some of their smart device games before, and all of them have a very cheerful atmosphere, and I got the impression that they make their games with great care.

Also, I heard that Paladin had experience working with Japanese game publishers previously, so from that standpoint as well, I may have been more interested in Paladin as a game studio. Since then, we had been looking for an opportunity to work together.

In 2017, our Nintendo team had an opportunity to visit Paladin Studios and at that time we discussed further about working on a project together. Nintendo requested Paladin to work on an experimental game idea, and from that experiment project the base of Good Job! was born. After discussions between the two companies, we agreed to polish this “raw stone” into a product, and the full game development started.

Is there anything you wanted to include but weren’t able to? Are there any ideas that were left on the cutting room floor?

Neessen: The development process for Good Job! was very iterative and we built everything we thought of. We kept the original game jam mentality for the first part of development and often built a feature in a day or so just to verify if there was a spark. If there was a spark, we’d continue developing the feature.

So yes, we tried so many fun things but were simply not able to fully develop them all and put them in the game. We had to pick and choose. Some ended up being great features, but just not a great match anymore as the overall direction of the game started to mature. Early on in development the company you would work at in the game was much more fantastical. So, we would have overcharged cables that would turn printers into bombs and we even had the ability to freeze time. Ultimately, we found that having a mundane office environment worked much better for the physical humor of the game.

One thing that we tried to make work was to build a level that could also function as a race track for people to race on with office chairs and fire extinguishers. Sadly, we could not combine that layout nicely with a good puzzle level, so we had to abandon that goal.

Can you talk about what the process was like of creating the different levels and objectives?

Once we had proven a fun experience, we would create the layout and the non-destructive puzzle, or the “problem” as we’d like to call it. Calling it a problem instead of a puzzle would help us get into the right mindset of creating a challenge with multiple solutions. We created the non-destructive part first, as it was the most difficult thing to get right, level design wise. And then we would add destructive shortcuts on top of it. These shortcuts create all these little moments where the player can seemingly ‘break’ the puzzle in entertaining ways.

The teams at Nintendo did a tremendous job at guiding us through this process and really helped us make the best content we could possibly make.

Takemoto: As we brainstormed many ideas, at first it was very challenging to finalize the overall structure and direction. But one day, the team got this concept of “have fun while working” because we just burst into laughter while playing this game, and ever since, I believe the development started going very smoothly to finalize the floor levels and objects’ characteristics. Whenever we got new ideas, we made the decisions based on the question, “does this make the work fun?” and it made the decision easier.

How did the team balance the game so that it would play well for both single-player and co-op?

Neessen: We mostly balanced the game for singleplayer. The nature of the game really helped us not having to be too strict on balance. The game is about breaking the rules and fixing the problem in your own creative way. We never wanted to say “you can’t do that” to the player. So if players found clever ways to beat a certain level much faster in co-op we didn’t need to find ways to stop them from doing that. All solutions were good solutions.

For co-op we wanted parents to be able to play together with their youngest kids. So that while the parents would try and solve the problem the kids could wreck the office. You can certainly work together if you want to and discover new ways to complete the levels, but it’s not required.

Takemoto: At Nintendo, we do believe that games should be fun enough to play even by yourself (requiring two players to have fun shouldn’t be a requirement), so that was one thing we made sure to communicate to the team. Because this game has the concept of sharing/dividing tasks in the foundation, I had a good idea that the 2-player gameplay would be solid, but I believe the Paladin team did do a good job balancing the gameplay well.

Overall, how was the experience of creating the game? Do you have any memorable or interesting stories from development?

Abercrombie: To get to know each other a little better, both we and the members of Nintendo that we worked with had written short biographies about themselves. I shared these with new members who joined the project, and every time it was a realization for me that I was working with people who were responsible for creating the games I grew up with. Despite all their experience, it was great to hear that they did not have a specific way of developing games, but rather adapting the process each time to cater the needs of the game.

From my experience with other platforms and clients, I have quite often been focused on making sure games meet performance or visual quality standards; it was very refreshing to hear from Nintendo that it’s gameplay-first, and the rest of the development aspects must ensure that players get an enjoyable experience.

Neessen: The development process was really tough but incredibly rewarding. We quickly built everything we thought of and developed what worked. It can be a stressful way of working at times as you don’t always know exactly where you are going, but it’s very rewarding when you discover your destination through experimentation. Working with Nintendo was incredible. They have so much experience and have this amazing focus on creating a fun experience first. Everything else takes a backseat until the fun experience is there. It sounds so obvious, but it’s really difficult to keep that focus while there is so much else going on during development.

Takemoto: During development, we visited Paladin Studios office, but it was literally like the Good Job! office! I think I saw where their inspirations for the (in-game) objects came from.

Also, it was very memorable that we could hear rain drops falling on their roof clearly. Even during a light rain, it sounded like a storm over video conferences and we had a hard time hearing Coen and Robert’s voices. It’s a great memory.

Good Job! is available for Switch via the eShop. Nintendo Everything would like to thank everyone from Nintendo and Paladin Studios that participated in this interview.