Posted on February 4, 2021 by Nicholas Serpa in Reviews, Switch eShop 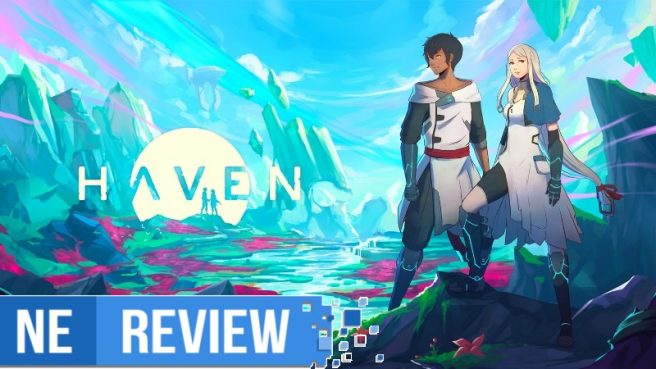 Playing Haven, a game about two lovers surviving in space together, often feels like dancing. Whether the game’s protagonists are careening across floating islands, fighting corrupted wildlife or engaging each other in conversation, almost every component of Haven’s gameplay has a rhythm to it that makes the experience feel like a spectacle. While it suffers from occasionally tedious systems and a bloated structure, Haven’s focused story, striking presentation, and innovative combat make it of the most unique third-person games I’ve played recently – despite some technical issues.

You play as Kay and Yu, a couple of twenty-somethings who have fled their spacefaring society and set up a new home on the distant planet of Source. They’re on the run from an oppressive regime that places its citizens into arranged marriages to keep society functioning as desired. Having illegally fallen in love (prior to the start of the game), the two steal a spacecraft and escape to an empty planet where they can live their lives together. An incident at the start of the game leaves their ship damaged and unable to move, so it’s the player’s job to help Yu and Kay explore Source, collect resources and equipment necessary for survival, and fend off creatures that have somehow turned aggressive.

I found unraveling the mysteries of what exactly happened on Source to be engaging, but the plot takes a backseat for most of the game when compared to the moment-to-moment conversations between the two characters. Yu and Kay are warm, funny, and emotionally driven characters who feel like real people in love with each other. All of their interactions are voice-acted and extremely well-written – and thank goodness, because those interactions are a huge focus of the game. The way the two of them banter with and support one another mirror what I’ve experienced in my own relationships, and I found it easy to get invested in their adventures. 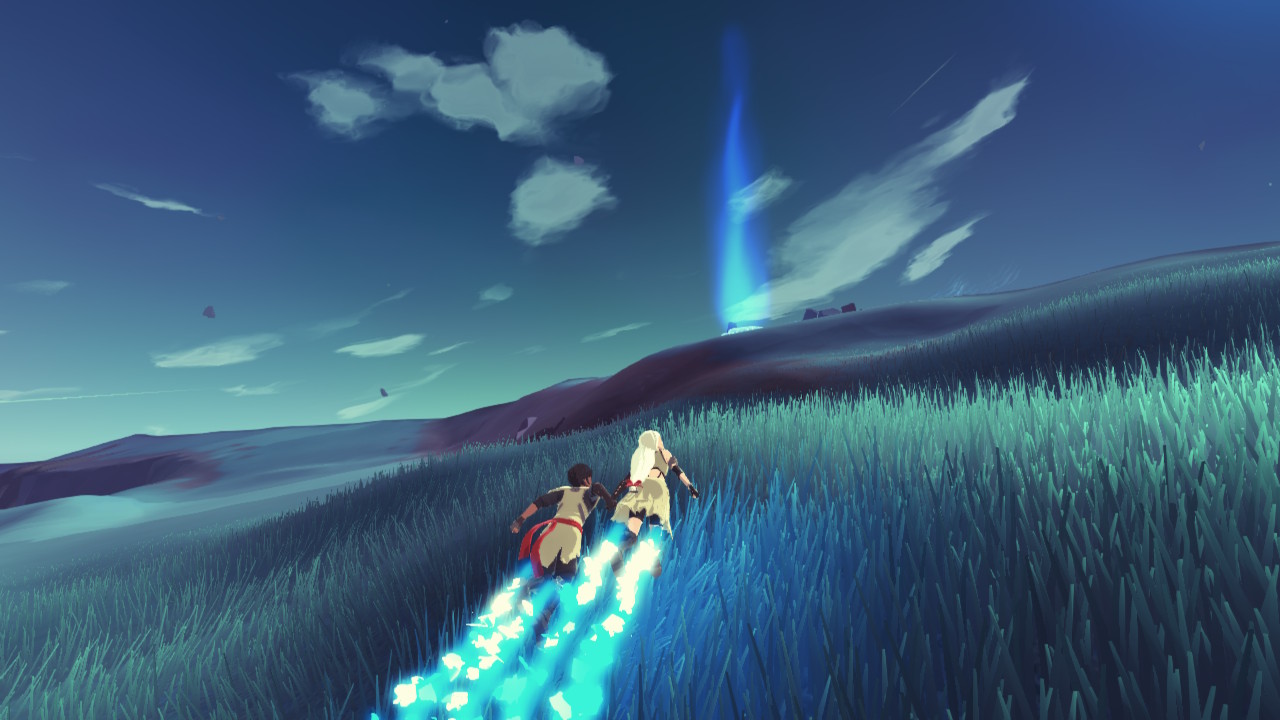 Most of the game involves exploring the floating islands that make up the planet, all of which are connected by a mysterious energy source called Flow that acts as the lifeblood of the game’s universe. Yu and Kay traverse Source with pairs of high-tech boots that let them glide and fly across the landscape with ease. The boots need to be powered up by finding and riding along “flowthreads” as you explore, a mechanic that feels similar to grinding along a rail in a skating game. Yu and Kay will pull off spins and flips as they soar through the air, and grass and water parts around them beautifully as they travel. All of this makes navigating the game’s mountainous landscapes one its greatest strengths – which is good, because you’ll be doing a lot of it as you hunt down parts for your ship.

Unfortunately, Flow can also take on a more sinister form called Rust that resembles a crystallized red goop. Rust has spread across the landscape of Source and corrupted its wildlife, turning them hostile towards Yu and Kay. The duo can clean up this rust simply by flying over it, but infected creatures need to be either avoided or fought. Running into an enemy on the overworld initiates combat which can’t be escaped from.

I found Haven’s combat to be engaging, fast paced, and sometimes difficult. The player selects commands for both Yu and Kay simultaneously as enemies attack in real time – each character has access to two types of attacks (some of which are only effective on certain types of enemies), a shield (that depletes after being hit several times and eventually becomes temporarily ineffective), and a “pacify” action that neutralizes the enemy. The goal is to deplete each enemy’s health bar so that it can be pacified, which frees it from the Rust’s corruption and turns it back to normal. 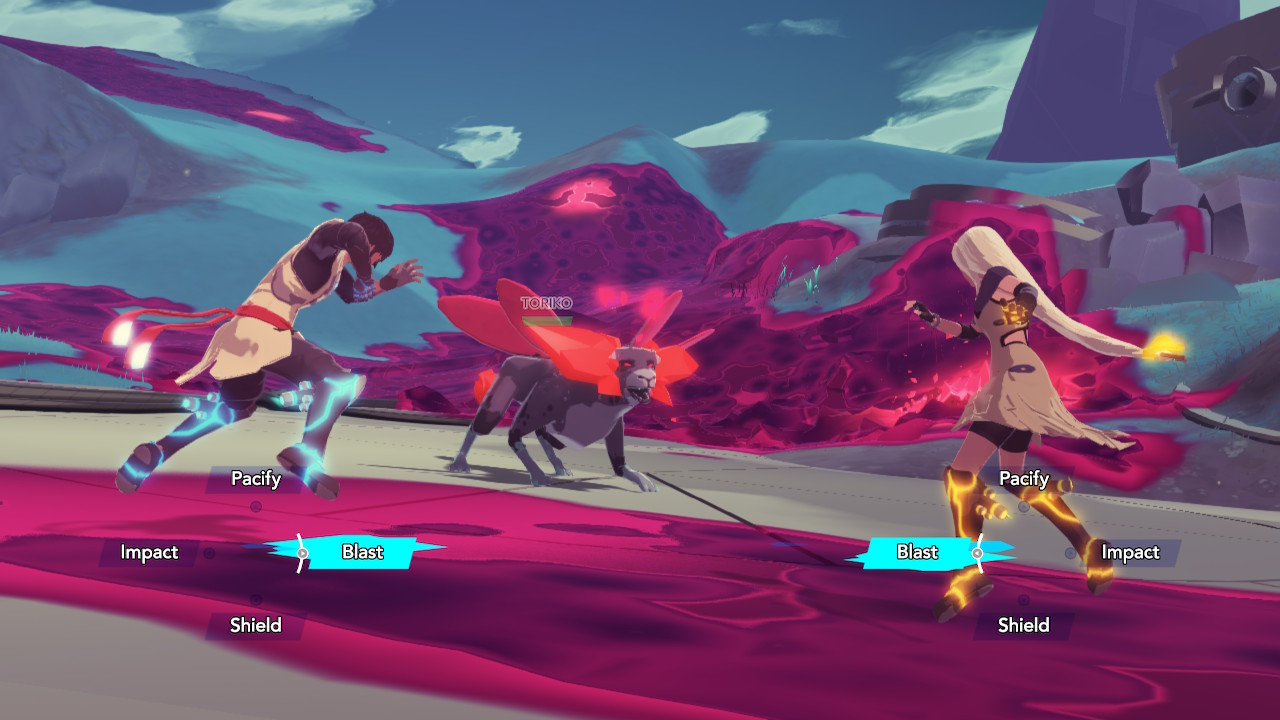 Fast reflexes are essential to find success in Haven’s combat. Because spamming the shield won’t work for long, it is crucial to constantly alternate between who’s attacking, who’s defending and who’s pacifying. Encounters with more than three enemies can quickly become overwhelming unless you can effectively control the rhythm of the combat. I did find that battles eventually became repetitive – there isn’t much variety when it comes to attack patterns and enemy design – but I ultimately loved the challenge of combat, and the stylish battle animations really made me feel like Yu and Kay were fighting in sync with each other.

Haven’s themes of romance and perseverance are hugely enhanced by the game’s magnificent sense of style, which I can only describe as “graceful.” Not since Persona 5 have I played a game that is so confident in its art direction, a hybrid of intricate 2D character art and a low-poly 3D world teeming with color. You travel across the world not by walking but gliding. As I wrote at the beginning of this review, there is such a strong sense of kinetic motion in this game that it often feels like a dance. That feeling is further enhanced by the game’s outstanding electronic soundtrack, which evoked emotions of hopefulness and mystery while I played.

It’s a shame that Haven’s strong aesthetic is somewhat hampered by the Switch’s technical limitations. In handheld mode, character models suffer from a lack of anti-aliasing that makes our protagonists appear jagged and pixelated. This effect is especially pronounced when exploring the open world as the camera zooms farther from the screen. While this did detract from my experience, it’s not as noticeable when Yu and Kay are in motion. The whole game looks significantly smoother in docked mode, which is where I preferred to play despite encountering frequent framerate drops. These stutters weren’t drastic enough to ruin the flow of gameplay, but it was clear when the game struggled to keep up. 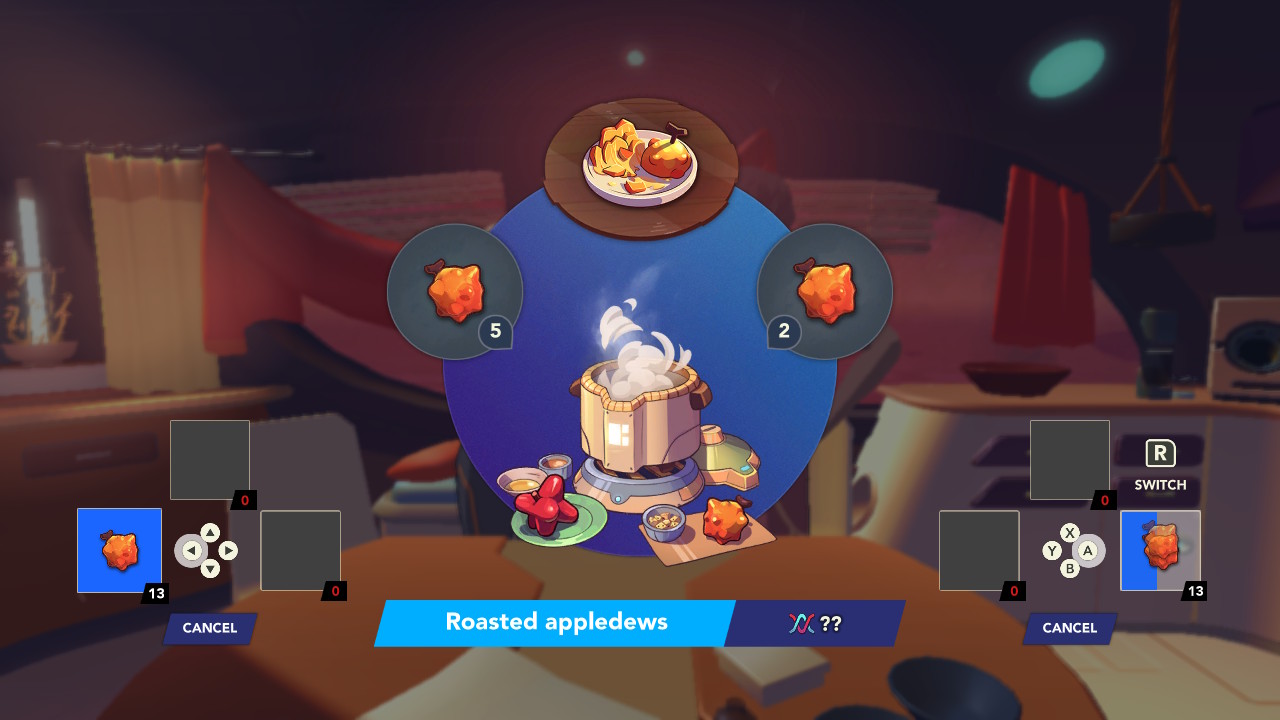 Between battling and exploring the environment, the player will need to manage Yu and Kay’s health and hunger meters to keep them effective in combat. Food and health-restoring items can be cooked and crafted back at your spaceship, The Nest, which is your main base of operations. There are a wide variety of different ingredients, and you’ll spend a large chunk of the game seeking out enough of them so that you can cook Yu and Kay a nice dinner before bed. They can also heal by hugging, which is frankly adorable.

I was taken aback at how large of a role crafting takes in the game, especially because there isn’t much depth to it – it mostly feels like a means to push the player to return to the Nest periodically, pausing the game’s progression. On one hand, I understand why the game is structured this way – most of the game’s main story beats take place back at your ship, so it’s important to visit frequently. But there were plenty of occasions in which I wanted to keep exploring but couldn’t because I needed to go craft something to progress. There are campsites across the map you can stay at where you can cook and heal, but only to a limited degree.

It’s a good thing, then, that crafting – alongside everything else you do in Haven – contributes to leveling up your characters’ relationship meter, which measures how close Yu and Kay are. You’ll want to fill up this bar as quickly as possible, as doing so unlocks stat boosts that improve their health, attack and defense strength, as well as other more negligible stats. The best part about levelling up, though, is that doing so brings Yu and Kay closer together and lets the player view some truly touching dialogue scenes. I won’t spoil any of them because they’re some of the best parts of the game. 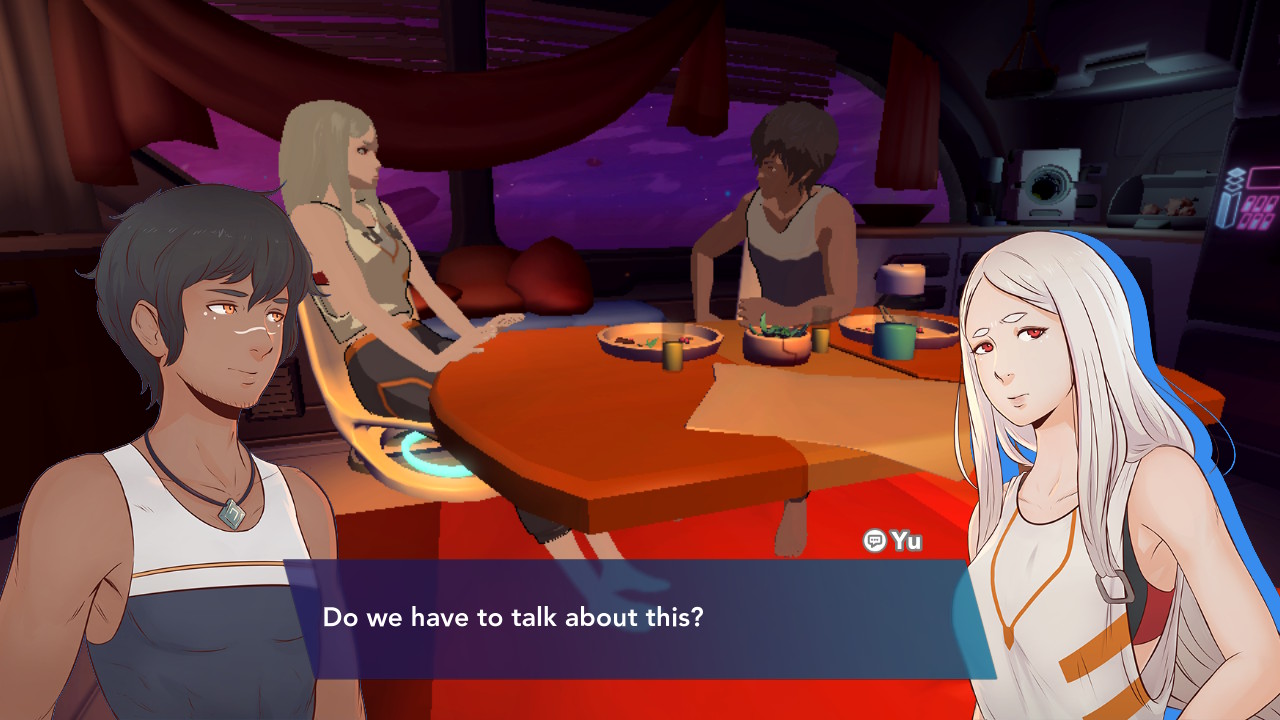 I was also surprised at how little combat contributed to levelling up Yu and Kay compared to everything else. I found that the biggest contributing factor to filling the relationship bar was by engaging the two characters in conversation with each other. These conversations can occur both during exploration and while recuperating at the Nest, and some of them allow the player to choose how they play out. Interestingly, you select dialogue options for both Yu and Kay, and while I didn’t feel like most of the choices affected how the story played out, they do affect how the relationship plays out, so you’ll want to choose carefully.

Haven also features drop-in cooperative local multiplayer for those who want to experience this narrative with a partner. While I didn’t get to test this extensively, I loved that I could initiate co-op just by sliding off the Joy-Cons and passing one to a friend. Doing so means sacrificing camera control, but the game does a good job of zooming out the camera to keep both characters onscreen at once, and playing through the entire game with a friend or lover seems well-suited to the themes of Haven’s story.

And although Haven could be difficult for a newcomer, I was impressed by the wide variety of accessibility options available. Difficulty can be adjusted in some pretty granular ways in the settings menu, such as reducing the speed at which enemies attack or making flowthreads easier to glide on. The game also offers detailed options for adjusting its HUD, subtitles and camera controls, something that many games with much larger budgets often fail to include. The Game Bakers should be commended for Haven’s commitment to accessibility and player inclusiveness.

My biggest grievance with Haven is how the game is paced. While most of the moment-to-moment gameplay elements are refined and fun to experience, the game’s nonlinear world design can make the progression drag. You will visit dozens of islands that, while pretty, don’t look vastly different from each other, and you will visit many of them over and over again as you search for the parts needed to fix your ship. Fast travel is only possible at certain islands, and only to islands which have been completely cleared of rust, so there’s a fair amount of busywork required before efficient exploration is really possible. I was able to finish Haven’s story in about 17 hours which felt a little long for me – I think the game would have benefitted from a little less busywork in between plot points, and a little more environmental diversity.

Despite its pacing and technical challenges, Haven is one of my favorite games I’ve played in the last year, and an easy recommendation for anyone wanting a good galactic space romance. The developers at The Game Bakers have crafted characters that made me laugh and tear up on their behalf, an immense accomplishment. The game’s combat, dialogue and traversal all flow together with a tight finesse that is truly exhilarating. By the time the credits roll, you might be tired of floating islands, but you’ll definitely be yearning for more of Yu and Kay.