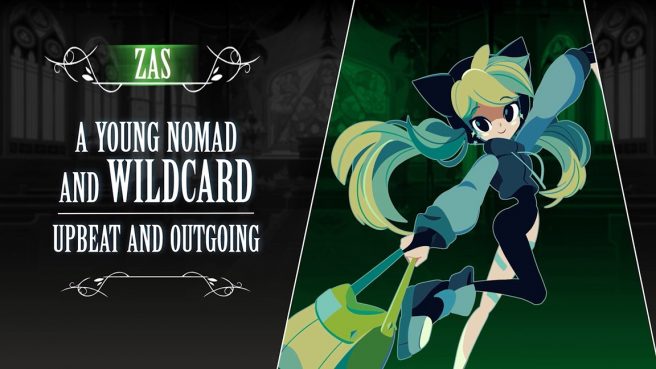 Lizzie Freeman has had a number of different voice roles in gaming and anime over the past few years, including JoJo’s Bizarre Adventure, Sword Art Online, Fire Emblem Heroes, and Dragalia Lost. She’s also voicing Zas in Cris Tales, one of the RPG’s main characters.

We recently had a chance to speak with Freeman about her role in Cris Tales and other topics. Outside of the upcoming Switch game, she spoke about how she became involved with voice acting, shared advice for those aspiring to get involved in the same field, spoke about her love for Nintendo, and more.

How do you feel about being a part of a project as large as Cris Tales?

I mean, I’m always excited to work on these new, big projects and I just find that all the effort that’s been put into it – and you can see the quality in it – the animation is beautiful. So when I found out I got the part, I was stoked and you know, “Yay!” It’s exciting. I love it.

Out of the characters that you’ve given life to, both in anime and gaming, which has been your favorite so far to voice?

Oh man, that’s such a tough question because it’s kind of like who’s your favorite channel. But let me try and pick one. The most fun or my favorite?

You know, I will take an answer to both of those if I can be greedy.

The most fun… probably Chitose from Tonikawa: Over the Moon for You. Or Sempai from Magical Sempai.

Chizuru (Rent-A-Girlfriend) is one of my favorites… I think I’m gonna have to go with Trish though from Jojo. I’m actually wearing a Trish shirt right now! It’s an official merch shirt, so it’s like “Wow!” Jojo is just a whirlwind for me because that was like my first thing that kind of really put me on the map.

When working a role, do you put yourself in the mindset of your characters?

I try to, yeah. I try to either connect with events from my own personal life to try and get into the headspace. I don’t know if this is actually a good technique, but a lot of the time before I start the line I’ll kind of almost do a meditative thing and kind of breathe in the energy of the moment before I speak, and that always helps me kind of get in the moment.

So kind of going back to an origin story, how did you break into the voice acting field?

How did I break into the voice acting field… it kind of started about ten years ago when I was in high school. I was a theater geek (laughs). I did plays, even like as early as 2008 I was doing plays in middle school. Somewhere along the way in my senior year of high school, it kind of dawned on me that there are actors who do the voices for cartoons, and I’ve always been a fan of animation, so that was kind of the start of, “Wait, there’s a way to do acting while also having a level of anonymity?”

So yeah, it was just this epiphany of like, “Wow, that sounds like a dream job because I get to be a part of the animation industry without having to be an artist.” And so I started going online and just kind of playing around with voice impressions of some cartoon characters I liked, and eventually that moved to  doing voices in fan animations for things which turned into doing voices for indie things until I moved to L.A. and had demos and stuff and just started reaching out to studios until I booked my first L.A. gig which was Secret of Mana – the remaster. So that was very exciting. It was my very first L.A. gig.

You seem to get involved in a lot of RPGs when it comes to game roles!

It kind of seems that way, doesn’t it? (laughs)

It really does! You seem to be like an RPG magnet. But what kind of games do you like enjoy playing, if any?

I’m kind of a hardcore Nintendo fangirl. Anything really chill is also right up my ally like Animal Crossing. I have about 650 hours in my Animal Crossing island. (laughs) And I love Splatoon – I actually literally shrieked when the Splatoon 3 reveal trailer started playing. Sims is also a big one.

So, some other things here, kind of about your origins. What life experience do you think was the most helpful for you in choosing this line of work?

I think again back to high school when we did the musical Le Misérables. I was just in the ensemble, but even that experience alone just made me fall in love with performing, and I think one of the biggest things that made me feel confident about breaking into the industry – there’s kind of a couple of instances I can think of. Really early on when I was doing voice impressions and things online, Deven Mack – he’s an actor in Canada – he reached out to me to audition for Dust: An Elysian Tail. And I was just this young– I think at the time I was like 17 or 18 year-old, don’t have any experience – and I was just like, ‘Woah! I get to audition for a game!’ And then I got booked, and it was just the most validating experience of my life to be a part of that.

For those who may be aspiring to become like you, are there any classes, books, or other resources you recommend?

There is a really good book – I want to say Voice-Over Voice Actor. And classes, there are a ton of people, veterans in the industry that you know like Richard Horvitz, Crispin Freeman, Debi Derryberry, who do coaching here in L.A. And I’m sure a lot of them are doing remote courses right now. So yeah, there are options definitely.

Is there anything about your work with Cris Tales that has been unique?

You came to be a good actor, because you’ve got some pretty notable roles. Trish is a pretty big deal, people liked your work as Cardinal in Sword Art Online: Alicization, Ryuzu in Re:Zero is fantastic. What would you say if someone was like, “Wow, how do I get as good as you are?”

I mean, just keep doing things. Just keep doing. I did theater, I studied theater in college, and then I did improv all through college. Then I kept doing things online. I was just constantly working on my craft one way or another. And then eventually I got coaching and stuff, which helped tremendously. And read out loud. Read out loud a lot.

Is there anything else you’re working on that you’d like to tell us about?

Recently announced was this cool web series called Sunset Paradise by Glitch Productions. It looks really fun, really cute and bubbly. Cells at Work! Code Black, the dub just launched last week and I play one of the White Blood Cells and a grumpy, grump Platelet. So that was a lot of fun. Other than that, you will have to wait and see!