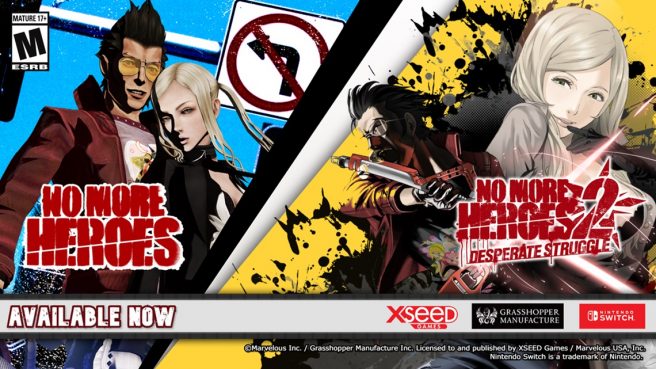 Engine Software has been behind some notable Switch ports that have recently landed on Switch. The studio handled No More Heroes 1 and 2 as well as Scott Pilgrim vs. The World – Complete Edition. Engine Software’s relationship has also continued with NIS America, working on The Legend of Heroes, Ys, and more for Switch.

Not too long ago, Nintendo Everything caught up Engine Software co-founder and vice president Ruud van de Moosdijk to talk more about these projects. We discussed a few other topics as well, including the never-ending rumors of new Switch hardware.

How did the Switch versions of No More Heroes 1 and 2 come to be? Who reached out to who?

We first got in touch with Grasshopper Manufacture through NIS America when we worked on the PC port of Killer7. During the final stages of that port we received word that Suda51 would be in Seattle giving interviews at PAX, and that he would love to meet with us. That is when we discussed for the first time doing a project directly with Grasshopper after Killer7 was done. We had follow-up meetings at GDC and E3 the following year to finalize the No More Heroes project. We then flew to Tokyo to visit Grasshopper’s offices and meet with people from Marvelous.

What sort of work was actually involved in terms of the porting process?

There is a ton of work that is involved with porting an older game to a newer system, especially since you never really know what kind of state the source material is in. Is the archive complete? Do the tools still work? How is the code structured? What kind of formats are used for the graphical assets etc. etc. Our first step is always to get the original sources to work in a modern development environment.

There are some “standard” steps that you already know you will have to take with any port. Remapping of controls or updating the UI for example, but you do not *really* know what you will be running into until you have the base game working and see all the problems.

How long did it take to port the No More Heroes games to Switch?

It took us about five to six months start to finish of pure development time. So that excludes all legal steps and evaluation of the source material, and discussions about what we want the port to be.

Most fans were happy to see that the Switch versions are based on the Wii originals. However, we know that an HD version of the first game did exist previously with Heroes’ Paradise on PS3. Were there ever any talks of porting Heroes Paradise to Switch, or was it always strictly the plan to focus on the Wii releases?

Suda-san was clear from the start he wanted to work off the Wii original versions. We briefly discussed adapting some of the changes made in Heroes Paradise into the original game but having looked at the differences between the versions it became clear early on that the PS3 version is very different from the Wii version (as low level as 3D models having more bones and a totally different naming convention). I think for the sake of style, it was a decision on an aesthetic level by Suda51 to use the originals (since there was no HD version of No More Heroes 2).

No More Heroes 1 and 2 now run much better from a technical perspective. Although these games were from the Wii era, were there any difficulties in achieving 60 frames per second and a higher resolution?

Performance wise, not really. The Switch is much more powerful machine than the Wii obviously so we had no concerns about the frame rate, even though there are some rare occasions where the Switch versions will dip slightly under 60 fps that has more to do with how the game is structured internally than processing power.

The biggest problem you have upping the framerate, which we also run into with for example Trails of Cold Steel, is timing. Timing is often based on framerate, so when you double the framerate suddenly everything that is based on the that happens twice as fast, from game mechanics to shaders and other visual effects. We spent a lot of time going through the code and adding in countermeasures. In some cases, we still missed a calculation here and there – as can be seen with the coconuts in the NMH2 mini-game falling faster than they should.

It is no secret that the core people of Engine Software grew up on Nihon Falcom games like Ancient Ys Vanished Omen and the Dragonslayer series (which became Legend of Heroes after the 6th game). Needless to say, we are personally delighted to be working on these games with NIS America and Falcom. I think the general collaboration with NIS America has been very good from the start, and this is underlined by the number of projects we do together. Besides the titles you mentioned, we also did Killer7, The Caligula Effect: Overdose and Prinny 1+2 Exploded & Reloaded with them.

The Falcom titles also have the additional benefit of working with Peter ‘Durante’ Thoman (on the PC ports) who has been absolutely fantastic to work with as well.

We know that you’ve also been busy with a few other projects like Scott Pilgrim vs. The World – Complete Edition. What has the experience of working on that project been like?

“Scott” was one of the more challenging projects we have worked on lately for various reasons. Ubisoft wanted the port to be on as many platforms as possible – I mean we are talking ports for PS4, Xbox One, Stadia, PC and Nintendo Switch and on top of that it is a multiplayer game. Having multiplayer simply doubles the complexity of any project. There were some moments during development where we were in a less than ideal state for the schedule we were trying to hit, that’s for sure.

We worked with Ubisoft before (on Monopoly/Risk/Uno) so even though it is culturally a completely different proposition compared to working with Japanese developers, there is a particularly good understanding between the two companies on how to work together. It helps tremendously if you do not have to worry about how your client is going to react when you hit a roadblock.

Do you find it difficult at all to balance multiple porting projects at once? How does the company manage its resources and manpower?

Like any company that runs multiple projects they are usually boxed off well, so with a specific team and producer working on each project, but the staffing on projects changes during a project. Every project has its own challenges, so the teams are usually set up to include specific skills we think we need, and manpower is added when needed. It sometimes is a puzzle to make sure we have the right people available for the right project at the right time for sure.

For example, for No More Heroes we did not need a huge amount of new art, so Sandra (the artist) was not “on” No More Heroes for the entirety of the project length, she switched between projects regularly. The more flexibility you have, the easier it is to plan.

In that light, we did recognize we were getting more and more opportunities, so we have been trying to actively recruit more people, but the Covid-19 pandemic has not done us any favors in that regard.

Rumors of a “Switch Pro” never seem to end, and it’s only natural that Nintendo will eventually come out with some sort of new system. Given that Engine Software has been involved with a bunch of Switch games over the years and has a lot of technical experience, is there anything you’d like to see from a Switch 2 / Switch successor in terms of specs?

Truth be told, our opinion on this might be counter-intuitive for a lot of people, but we are not large subscribers of the “Pro” model. Sure, it would be nice to have more RAM or faster GPU/CPU compared to before, but if it is still considered the same platform you must make sure your game runs on every model. So, for compatibility reasons your performance gets benchmarked on the lowest specifications. We have seen with prior ‘upgraded systems’ that the additional power never really got utilized well for this reason.

We have to ask: is there anything you can say or tease when it comes to future Switch projects from Engine Software?

Oh yes, of course you have to ask! It is always a difficult question though since in 99.9% of the cases we really can not say anything without ruining our clients planned announcement or marketing (or simply breaching our contracts). Some generic teases perhaps? Like…we are working on the newer systems like PS5 and Xbox Series X, and the Amazon streaming service Luna. In 2021 we will continue to work on new projects with every client we have worked with in 2020. Yes, that includes Suda51. No, I will not say on what.

One of the things we really did not have much time for this year, which I hope we will get a chance to do again in 2021 is work with some indie developers on broadening their markets. It is something we have always done in the past (ref Oceanhorn, Terraria, Blossom Tales, Earthlock, Swords & Soldiers 2, Into the Breach) but besides Oceanhorn 2 we really haven’t had any time in 2020.