Posted on October 6, 2018 by Brian(@NE_Brian) in Interviews, Switch 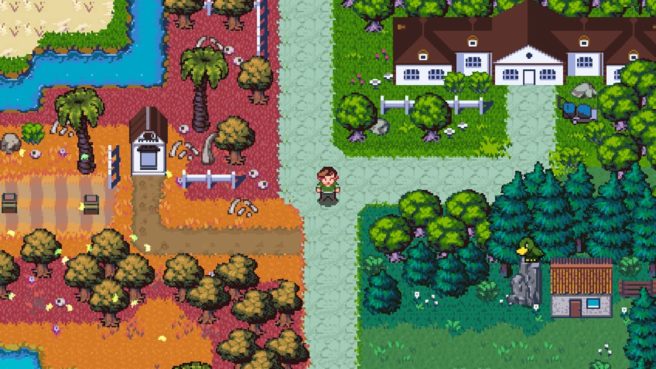 It was nearly a year ago that Golf Story debuted on Switch. With that in mind, we recently caught up with Sidebar Games about the well-regarded title.

We chatted with the studio’s Andrew Newey about a number of topics, including Golf Story’s Wii U origins and plans when it was in development for the older console. Newey also discussed some scrapped ideas (including DLC that never materialized), and we also had to ask about Sidebar’s next game – though he was understandably quiet on that front.

You can read our full talk with Newey all about Golf Story below.

From start to finish, how long did it take to develop Golf Story?

I can’t remember exactly when we started, but it was about 1 year. It was going to be a small game at first, but it kept expanding as we had new ideas.

You’ve mentioned previously that Golf Story was once planned for Wii U. How far along was Golf Story in development for Wii U before it moved over to Switch?

It was just a few months. I do remember we had already made some menus on the GamePad. The idea was that the GamePad menus would exist independently to the rest of the game. So if you were playing a round of golf, you could access the various menus on the GamePad screen, check out your missions, see detailed round analysis with stats like strokes gained putting etc.

There was even an idea of a persistent virtual pet on the GamePad that you had to care for whilst attending to your tasks in the game. It would have been the pinnacle of GamePad multitasking productivity.

Were there any ideas you had that didn’t make it into the final game?

Here’s a few of the ideas that we didn’t use:

A really long, par 20 hole that you would get to use the long driver on.

One of my favorite ideas was a Crazy Taxi style mini game where you drive around picking up molerats in the RC car. The small boats at the beach that you can hit balls at were going to be driveable too.

There was an idea that if you did well in Galf, you could submit your high score (in the game) and receive a gold cartridge in the (in-game) mail with a new version that included a 9th hole.

We’ve heard that Golf Story takes inspiration from Mario Golf for the GBA. Were there any other titles that helped shape Golf Story and its mechanics?

Yes, but I can’t remember what came from where. We got a lot of ideas from other games.

Did any real-life inspirations influence the story or characters? Other than fighting an army of undead skeletons using golf balls, obviously.

Yes, it was very common to repurpose lines for the game. The scene where Coach stands by the computer and tells the player what comments to leave on an internet video is somewhat based on a true event. Or the vibe of the thing is at least.

Golf Story’s art is very reminiscent of 16-bit games. Was the choice of colorful pixel graphics influenced by any specific game or series?

It was based on the artist’s style for the most part. We mainly wanted it to be simple so you could tell things apart easily and plan your golfing accordingly.

Were you surprised by the initial fan reaction? Starting with the initial reveal, people really took an interest to Golf Story and were desperate to find out about a release date.

It was quite surprising. The enthusiasm about the release date helped to finish the game relatively on time.

The game has many nods to Australia, including its writing and world map. Being a couple of Aussie’s, did these attributes come naturally or was your vision from the start to make a game that feels like it came from the land down under?

I tried not to do it at first. I thought people would be confused or angry if characters talked weird, kind of like when there’s a French or Russian character in a game with text dialog and they write everything with the accent. But it seemed like it made sense for the people at the first course. And if there’s a crocodile, somebody has to say crikey. And it advanced from there. People don’t seem to mind too much, so that’s good.

Golf Story started out as a Switch exclusive, and it’s remained that way. What led you to only releasing the game on a Nintendo platform?

We thought of a new game idea so we decided to work on that soon after the release.

Did you ever consider DLC, or did you always have in mind that the game you would end up releasing would be it for Golf Story?

I had a whole DLC scenario planned out with new courses, characters and events. But we decided to go with the new game instead.

Back during GDC in March, Nintendo named Golf Story as one of the ten best-selling indie games on Switch at the time. Can you share any additional information about the game’s sales? Are you pleased with how it sold overall?

A physical release of Golf Story was something that fans were very interested in. How’d that eventually happen? How long did it take to lock everything down with Limited Run Games?

It didn’t take long after we agreed. They took care of everything so there was probably a lot more time involved on their end. I just got to see the cool stuff as it was being made.

Your studio, Sidebar Games, was a two-man team. Is that still the case? If so, have you thought about growing the team since Golf Story’s success?

We’re thinking about it. It would be real handy.

What can you tell us (if anything!) about Sidebar Games’ next project?

I can’t say much about it. We had a few different ideas for what to do next, but I think this one is most similar to Golf Story in terms of excitement about the possibilities of what we could do.

Nintendo Everything would like to thank Andrew Newey for taking the time to answer our questions.