Posted on September 28, 2019 by Oni Dino(@Oni_Dino) in Interviews, Switch eShop 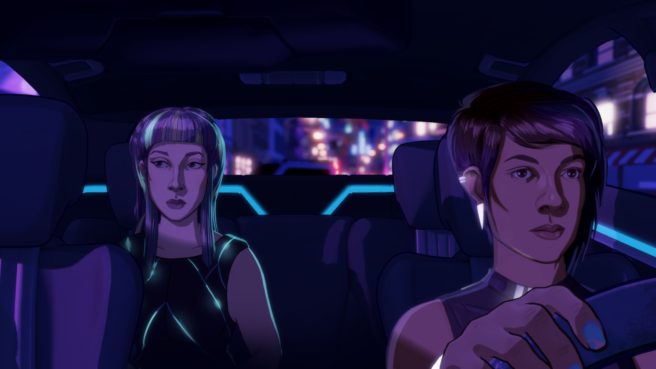 If you watched the latest Nindies Showcase from earlier in the year, you may have heard about a little game called Neo Cab. The “emotional survival game about staying human in a world disrupted by automation” will be coming to Switch in just a few days – October 3.

Earlier this year, we caught up with Chance Agency creative director Patrick Ewing to learn more about the game. Ewing chatted with us about the story and gameplay, what to expect from the Switch version, and even the possibility of more content.

So tell me a little bit about Neo Cab.

In Neo Cab, which is a narrative adventure game coming out later this year for Nintendo Switch, Mac, and PC, you are one of the last human drivers in a world overcome by automation – think like the last bastion of the taxi, uber, lift driver in a world where everything has gone autonomous. You showed up in the super weird future vaguely neon cyberpunk city of Los Solos, California, and on night one, your best friend who you’re going to be moving in with vanishes under mysterious circumstances shall we say. Now you have no plans to stay, nowhere to go. You’ve gotta keep driving and keep your job. You have one of the rare few jobs that exists and need to make enough money to find a place to sleep each night, keep your star rating around five stars so you don’t get fired, and solve the mystery of your friend’s disappearance using emotional intelligence.

Clearly this is a really unique concept. I don’t know how many games have even touched upon this kind of idea before. What was your inspiration behind this kind of thing?

It’s like a lot of ideas that have been bubbling for a while in a stew I would say that just sort of snapped together all at once. It was a mixture of things. I loved 80 Days, and having that as a narrative game with a ton of choice and seeing human relations like collapse down to a star rating was really interesting. It’s already so gamey. All the things you have to do to make search, pricing, keep your rating up, so I started thinking how cyberpunk this already was. We call the game ‘nowpunk’. It’s just a reflection of today, 2019, with a little bit of imagination.

Then the emotional health mechanic came in as a backstep to that, where it was you never want to – there have been so many choice-based games where you’re like, “Press A for the good person response, press B for the evil response.” And so we wanted to explore new ground, and for us the Feelgrid is Lena’s emotional health bracelet, so it’s like a fictional, peripheral, biometric thing where it tells you Lena’s exact emotions in the moment as well as their intensity. We plugged this directly into the choice system, so Lena’s emotional state as seen by the Feelgrid makes new choices available sometimes. They’re tinged with that color, and also takes some emotions and options away. You can picture yourself being too depressed to go out tonight or too angry to be polite or something like that. The story gets more interesting because of this emotional map that Lena’s always traversing, and your choices and the people you choose to pick up are feeding into this loop where it’s like, “My star rating relies on people liking me. People liking me relies on me saying the right thing. Me saying the right thing relies on me feeling okay about myself.”

So that’s the core loop of Neo Cab really, and it’s not just about who you pick up, but you’ll meet other characters you have relationships with who have Feelgrids as well, so there’s a dynamic of two people, which maybe ultimately says something about relationships – both good, nurturing relationships and toxic ones.

You touched a bit upon the story. You said how your friend is missing. Is that the main story arc in the game?

It’s tough to say. I would say it’s the framing narrative. It does give the story a beginning and an end. This is where things start. Every story has to end sometime, but for us a lot of it was mostly about exploring the world. Every time you go to the map, you have 3-5 people you can pick up. A lot of it is just about, “What is this neo future world like as told through these individual stories?” And then the people who you resonate with, you can always pick them up again and continue that storyline. But if you’re bored, find somebody else. We kind of wanted that feeling of a big world where you get to follow your interests. Here’s like three different people and each one is an opportunity for a new story.

So you get to choose between a couple of different people?

Every time, right? And then on day two, it’s going to be three totally different people. We have a cast of 18. There’s a lot of replayability because of the emotional system, because Lena’s dialogue and changes, and then also the fact that most of the content is not crit path. You can experience it in any order.

Based on what you said, it sounds like there’s a ton of replayability.

That’s my ideal version. I don’t think it’s more than two playthroughs. I mean, obsessive people will always find new content. You have to play it like 200 times probably to even get close. When we were making decisions for branching content, our main thing was, “How many times would someone have to play the game to see both branches?” And if the answer was two, that was good. If it was three, maybe. Any more than that we were like, “That’s not worth it.” You gotta pick your battles and invest energy and stuff into people actually see and then make those choices count.

In regards to the Switch build in particular, I’m not sure how far along it is and whatnot, but if you can speak to it, do you know what you’re aiming for resolution and frame rate?

Resolution we’re just doing HD. We’re not doing 4K or anything like that, at least on Switch. We’d rather have a higher frame rate. We’d rather use more effects. There’s actually a lot going on.

First of all, this city is actually like a massive city. There’s pockets of density and residential areas, so those little details matter to us. We’re actually using a lot of Unity post-processing effects. There’s a whole city out there, so even though it’s not like you’re driving around, there’s a lot going on visually, and it did require a lot of custom work to make it feel good on the Switch, but I’m happy to say it feels great. It feels really smooth, and we were able to give you the same feeling of a full, dense, lit-up neon city.

I think the nature of this game where it is a narrative-driven game really lends itself well to the Switch where you can just lay in bed, shove that screen right in your face, put on your headphones, play this game and escape.

That’s why we did Switch as our only console at launch, and it will be a same-day launch. We love our Switches, we want to be able to play it in bed. We actually talk about like our dream version of how people play this. You come home from work, you do a shift of Lena’s job which takes you like 20 minutes, you go to bed, Lena goes to bed. Then the next night you can continue and if you play that way, the game takes like one week.

It’s like 6-8 hours depending on how fast of a reader you are. For a story game… a great Netflix mini-series is 6-8 hours, you know? It would be crazy to me if Netflix was like, “Watch our new show. It’s only 80 hours!” That would be overwhelming, so we think there’s a lot of story and a lot of character-exploration to do in 6-8. And then if you still want more, you should start again because you can take very different paths.

On that topic of Switch, are there any additional features that you’re going to be including that wouldn’t be in the others such as using the touch screen?

How about with acceleration with the car when you’re driving?

We’ve played around with it a bit, but we wanted it to just be the Feelgrid because that’s more the game mechanic. And then it’s great with headphones. The sound of Switch’s audio is awesome. It feels awesome on a TV. I was surprised – the art style, even on a 4K TV feels crisp and awesome.

I will say this: the system was designed to be modular like that. We have 18 characters in the game. We wrote, or concepted out, double that. There’s room for new people to come and the framework of the game is such that that would totally work. So that was intended. But whether we can do DLC depends on both how successful the game is financially, and how burnt out we are as devs. So the main thing I can say is wishlist us on Steam, follow us on Twitter, and hopefully if the game makes money, we can keep people on and make more stories.

Is there any other things you want to say specifically to the Nintendo community or anything you want to highlight about this game in particular?

I would just say that we’re all Nintendo kids. The whole dev team – it was our dream to be on a Nintendo platform, and all of us said, when we knew Switch was happening and we were especially in the Nindies Showcase, one of our writers said, “I want to go back in time and tell my 10 year-old self, everything’s gonna work out fine, because you’re writing a Nintendo game.” I would just say it’s really special to us both as a community to be a part of and just this was the device we all want to play it on. We hope you all enjoy it as much as we enjoyed making it.