Posted on February 5, 2022 by Brian(@NE_Brian) in Interviews, Switch eShop 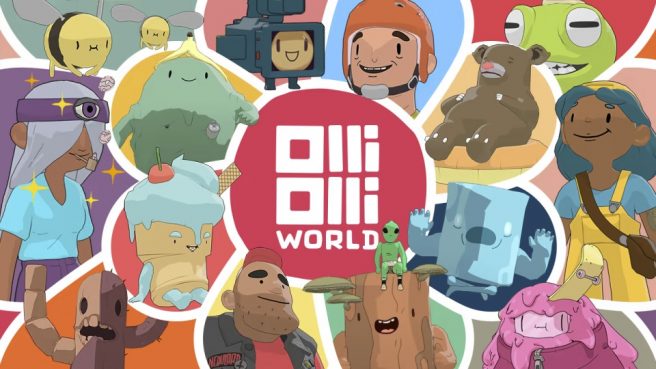 We recently had the opportunity to speak with Roll7’s Jemima Tyssen Smith about OlliOlli World, including the new art style, the Switch version, and more. This comes ahead of the game’s release next week.

Below is our full discussion:

OlliOlli World has a very different art style compared to the first two games – not only because of the new 3D look, but also because of the cartoon-looking characters and scenarios with pastel colors. What led the team to that new style and what are some of the inspirations behind it?

We had been wanting to create a game with a more illustrative style for a while, and with OlliOlli World we had a substantial enough scope and big enough team to finally make it happen. The new style we landed on took a lot of prototyping and concept work from Germán Reina Carmona (Concept Artist), and Paul Abbott (Art Lead), and we then had to build a whole new renderer from the ground up to bring it all to life (huge shout-out to Dickie McCarthy for that). I know that the art team took a lot of inspiration from all over – everything from comic books, to ‘30’s cartoons, to real-world skate style and culture.

Even though the game has arcade gameplay, there’s a lot of world-building here with different characters and places. However, the world-building doesn’t feel like it’s interrupting the “fun” since the dialogue is quick and enjoyable to read. Was this a concern during development? Was the idea of mixing arcade gameplay with storytelling decided on from the beginning?

Yes, there was definitely a sense from early on that we wanted this to be a game that had a heavier narrative component than our previous titles. The dialogue goes through a number of passes and edits, and there’s a real effort to make sure it’s snappy and concise by the time it makes it into the game for real. We want it to add to the player experience, not to detract from it – which is a balance that takes time and work to get right!

And, as you mention, there’s a lot of narrative content outside of the dialogue – Lizz Lunney (Narrative Designer) worked very closely with Germán and John Ribbins (Creative Director) to build the locations and lore of the different areas and peoples of Radlandia.

The game has a satisfactory feel to it and at the same time keeps the players on their toes, almost like a rhythm game. It’s a very different experience – not quite a classic 2D platformer nor an endless runner. Is there anything interesting you can share about the thought process on that unique kind of level design?

Yeah, it very much reminds me of a rhythm game too – I think it’s partly how great the soundtrack is… I definitely zone in to that same sense of flow when I’ve been playing for a while!

I think that design-wise, lot of what makes the level design unique relates to the unique 2.5D style we’ve developed – the design sensibility is still very similar to a 2D platformer in some ways, but the 3D art style allows levels to have a lot more depth to them. Opening up the potential for multiple paths and for changing lanes adds a real richness to OlliOlli World – and the whole design team have really gone above and beyond in order to create something that feels totally fresh and exciting to play.

Finally, performance seems to be something really important for the experience here. Can you share with us any information about the performance of the Switch version?

The game runs at a smooth 60fps on Switch – and it works great either handheld or docked!

OlliOlli World launches for Switch on February 8, 2022. If you’re interested in checking out out early thoughts on the game, head on over here.