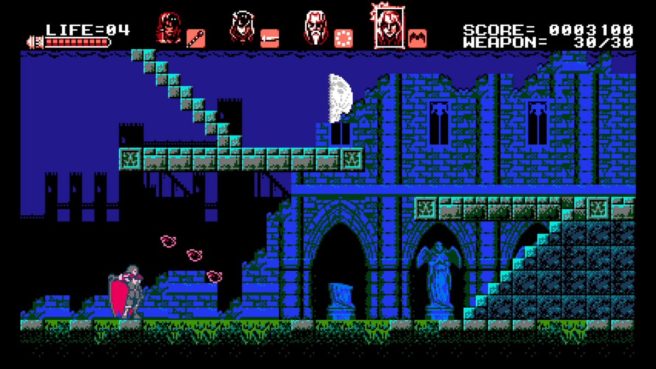 Despite only having just announced it at BitSummit last week, Bloodstained: Curse of the Moon is releasing next Thursday. Inti Creates will have it ready on both Switch and 3DS.

At BitSummit, USgamer spoke with Inti Creates president Takuya Aizu to talk more about the new title. Aizu commented on how involved Koji Igarashi is (Igarashi himself also had a few words here), how long it has been in development for, and the relationship to the upcoming Bloodstained: Ritual of the Night.

Find these excerpts below. You can read the full piece on USgamer here.

On how involved Igarashi is with the project…

“The development of the game is being done entirely by Inti Creates. They’re very, very good at the 8-bit retro style. I’m handling some of the scenarios and world feel, but the overall design is being handled by Inti Creates. The hard part of the design for me is to make sure that the two games—Curse of the Moon and Ritual of the Night—are connected. I did my best to play up that connection.” – Igarashi

Aizu on when the project started…

“The first link in the chain started at E3 2016, after we had completed the original alpha ROM for Ritual of the Night. After that, we shifted from that project to put all of our efforts into Curse of the Moon. From that time, we started thinking, ‘What kind of game do we want to make? How are we going to do that?’ All that sort of baseline-level stuff. After a lot of back-and-forth with IGA and hammering out the design, the coding really began in earnest last fall.”

“Curse was originally promised as a story prequel, but I think of it more as a spin-off. If I were to explain to you why that is, I’d be giving away a lot of the story, which I don’t want to do! But yeah, it’s more of a spinoff than a set-in-stone prequel.”