Itagaki talks Devil’s Third – how it ended up on Wii U, low sales, NoA’s handling of the game, negative reviews 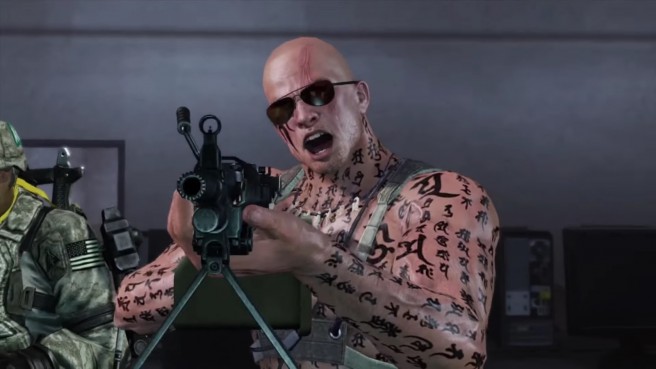 Today, Polygon published a lengthy interview with Valhalla Game Studios head Tomonobu Itagaki. Much of the discussion centered around the ill-fated Wii U game Devil’s Third. He chatted about its origins and how it ended up on Wii U, Nintendo of America’s handling of the game, and the negative critical reception.

We’ve picked out notable excerpts from the interview below. Be sure to read the entire piece on Polygon here as well.

James Mielke: So let’s talk about Devil’s Third. It was originally supposed to be a Microsoft exclusive, right?

Tomonobu Itagaki: Yeah, this is probably a shock to the gaming world.

TI: We met with all the big publishers. The game wasn’t called Devil’s Third at the time. [Itagaki points to a photograph.] Here’s a picture of Danny Bilson of THQ. The first time I met with him, we fought for three hours. For three hours before I showed him my game, we quarrelled.

… So, Microsoft and Danny are the fathers of this game. And, of course Nintendo, who released the game. While the sales of the game were not very good, there’s a huge difference between a game that sees the light of day and one that doesn’t. So I’m grateful to Nintendo from the bottom of my heart for shipping Devil’s Third.

JM: Yes, well, that’s jumping to the end. At the beginning, the initial trailer was very well received and I believe there were two playable characters, a male and female character …

TI: There wasn’t an announcement that there would be two playable characters but, yes, there were two characters in the initial video. The thing I want to say to the readers of this article is to never give up. If you don’t give up, you will find supporters who will help you. I think you can see that from this story. And to live optimistically. You know that my commitment has never changed. If you persevere, you will always find someone who will support you.

JM: Once THQ announced that it would be dropping all its games, Valhalla announced it would be working with [South Korean game publisher] Doobic and be taking a multiplatform strategy with the game, even on mobile and PC. It was very broad. How did that come about?

TI: First of all, unfortunately, Doobic went out of business. And our situation is different than the other THQ titles, like Saints Row and Warhammer. We kept our IP so we own the Devil’s Third property. That’s why we were able to release the game with Nintendo and [now are releasing it on PC].

JM: Let’s talk about how Devil’s Third ended up on Wii U.

TI: When we were working with Danny at THQ, he said that because this is such a unique game it should be on PS3, Xbox 360 and PC. So Danny and I initially decided that this game should be a multiplatform game. When THQ went bankrupt, Kanematsu approached [Satoru] Iwata-san at Nintendo and they picked up the game. The reason why Nintendo picked up the game is that they don’t have enough strong online games. Devil’s Third is not a game that Nintendo could make internally, so we came in as their mercenaries to make a strong online game.

JM: I heard that Nintendo U.S. was obligated to find a publisher in the U.S., but when they were not able to find a publisher they had to release it as a first-party title. The way they released it, it seemed they only made the minimal effort necessary to satisfy their legal obligation. It was very hard to find physical copies, and there was very low visibility and awareness.

TI: I generally don’t like to badmouth people and I have nothing but appreciation toward Nintendo for releasing Devil’s Third. However, I don’t believe that they gave this game their best effort in promoting and selling the game. At the same time, I also understand their position.

JM: I understand the need to maintain relationships with Nintendo and avoid the politics, but it seems Nintendo Japan was more supportive of the game than Nintendo America.

TI: Iwata-san took us on for strategic reasons to provide them with know-how of online games and multiplayer games. That was the intention of Nintendo HQ, but those strategic reasons don’t always trickle down to the branch offices. This is the case in any U.S. company, especially in the sales division; they always underestimate the sales performance. This way, when they sell over the low estimated sales, they can claim a higher percentage over estimated sales and request a bigger bonus accordingly. There is a typical tendency for this to happen. That’s a fact, and it’s a flaw in U.S. sales strategy.

TI: I don’t have any resentment toward the sales team at Nintendo U.S. It’s natural for them to have made the decisions they made. But, I do realize that there was a shortage and I addressed this to Nintendo many times.

JM: Did Nintendo print more copies upon your request?

TI: You know the answer to that.

TI: Hmm. Maybe they printed a few more, but it wasn’t nearly enough. I heard that a copy of Devil’s Third was selling for over $1,000 on eBay.

[Note: As of this story posting, most copies on eBay go for approximately $50-60.]

JM: You’ve also talked about the plan that Devil’s Third is going to be a trilogy …

TI: Before we move on, I don’t want the readers to interpret our conversation and think that the Nintendo U.S. sales department sent the game to its death. Our game is alive. It’s not dead. It’s the difference between a stillborn and birth. We shipped the title. It might have only been a few thousand units but it was released into the world healthy and with all its limbs.

JM: It’s hard to ignore the very vocal voice of the social media community these days, and if they see there’s no support and acknowledgement from Nintendo of America, they’re going to draw their own conclusions.

TI: Naturally. And I get a lot of comments from fans on Facebook asking why we don’t do more updates or more to support the game. My response is always, “It’s up to Nintendo.”

JM: Nintendo is shutting down the multiplayer servers at the end of the year, right? Were you involved in that decision?

TI: That was Nintendo’s decision. But I think they did well considering the circumstances. The death of Iwata-san …

JM: The reviews for Devil’s Third weren’t stellar. A lot of reviews were saying that if it had come out in 2008 it would have been fine, but now it seems dated. The general view was that the game was stuck in the late Xbox 360 era. So, since nobody knows about your plans for a Devil’s Third trilogy — I’m guessing this interview is the first anyone will learn of them — because of the reviews and the long wait of the release versus the end result, a cynical response to this is that these are the sequels that nobody asked for. How would you respond to that?

TI: Let me explain this in parts. First, the reason the reviews were so poor. I have analyzed the reason. This game was designed to be a massive shooter, so it would be fun if there were at least a thousand players in the game. But Nintendo didn’t set up online matches for reviewers. So there was no way for reviewers to experience the online mode as we designed it, and they reviewed the game based mostly on the single-player story mode. If it had been Microsoft that had published the game, they would have given the game to a group of 500 players who had signed an NDA to play for the reviewers to experience the massive online mode. But NOA didn’t do that.

So I don’t blame the reviewers for underestimating the experience of the online mode. There’s no value to the review of someone who’s evaluating a piece of art with blindfolds on. That was 95 percent of the negative criticism toward the game. The remaining 5 percent was by people who wanted to build credibility by criticising the game. And this is my assumption, but one person wrote a negative review and NOA didn’t do anything to stop or change the review, so others followed suit. So I don’t really believe that the reviews were credible. Although I haven’t read all the reviews, the reviews I saw were not very objective, more emotional.

JM: There’s nothing Nintendo can do about it once the review discs are out the door. Especially in the West, the media takes its integrity very seriously.

TI: It’s just what I presume happened. Once the game was out, the reviews were low but the fan’s response was great, right? I don’t make games for the media. I make games for the fans. The sales numbers were not great but it was highly received by the fans so that’s what matters to me. That’s why we are going forward with making the PC version. And the fact that we can make a PC version is thanks to Nintendo for releasing the original game. If the reviewers were right, we wouldn’t have been able to find publishers and release the PC version in Japan, Russia, U.S., China, etc., all over the world. People know that it’s a good game.

And the fans don’t really trust the media reviews these days. They depend more on peer reviews.

TI: I think you are aware, but I’ve probably talked to more game reviewers than any other developer in the industry. So I understand the media well and the differences between countries. There was a newspaper journalist who was very passionate and I reciprocated with long responses, thinking he was going to write a lot of good things. But the article was “this” long, only a few lines. Which country do you think? He was Italian. Not a problem. I love him.

Anyway, it might sound like I’m avoiding the question, but I just don’t care about reviews anymore. I’ve been in this business for 25, 26 years now. When we released Dead or Alive, the Japanese game industry called it “Dead or Dead” at first. But, as you know, it went on to be a hit. Ninja Gaiden’s code name during development was “Kunai” [the name of a ninja’s weapon] and critics called it “Yarita-kunai,” which translates to “I don’t want to play” in English.

TI: So my message is that you have to be honest to yourself and brush off the haters and keep updating and improving the game. You have to listen to the fans and the player’s voice. And always give thanks to your supporters.

JM: Were there any criticisms that you did take to heart and felt you could improve in those areas?

TI: Of course! There wasn’t enough accuracy for a shooting game. We learned a lot from the criticisms. I like honesty. Good, useful suggestions are always welcomed. I’ve gotten pretty good at skimming English articles so I can judge whether they are just badmouthing the game or offering useful advice that will improve the game.