Kimishima – mobile talk, Wii U support, QoL still coming, will be around for more than a year

Posted on December 3, 2015 by Brian(@NE_Brian) in General Nintendo, Mobile, News, Wii U 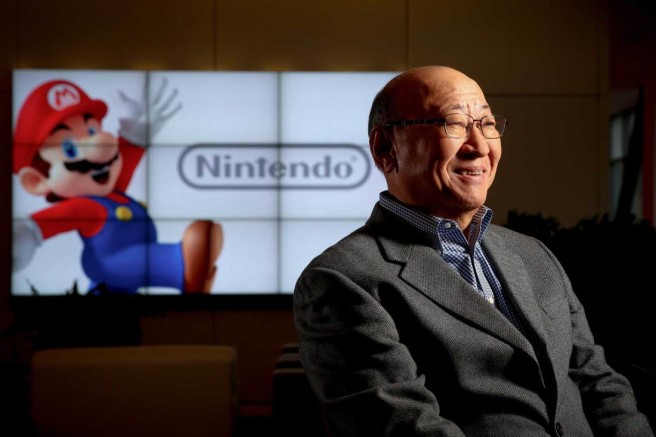 In addition to NX, new Nintendo president Tatsumi Kimishima addressed several other topics pertaining to the company while speaking with TIME. These include mobile, Wii U support in the future and how he didn’t say the system would be a failure, amiibo, Shigeru Miyamoto’s “fellow” role, Genyo Takeda, Quality of Life, and the length of his presidency.

On not blindly porting IP to mobile devices…

“We want to increase the population of those people who have access to our IP, and we also need to make the way they access our IP as simple as we can or as easy as we can. And that’s how we’re going to make the smart device business successful.”

“What we really want to do is we want people to want to interact with our IP. And so we want to increase the frequency with which they encounter our IP, whether that’s through them parks, or merchandize with our IP, or just images and visual interactions with Nintendo IP.”

“And so of course we need something to connect all of this together, and this is where My Nintendo as well as the Nintendo Account system comes in,” he says, describing Nintendo Account as a strategy to unify all of Nintendo’s properties across pretty much every platform, from Nintendo’s own devices to tablets and smartphones to PCs and beyond. My Nintendo, a crucial subset of Nintendo Account and the company’s full-on rethink of its recently retired games-focused “Club Nintendo,” will still be a rewards program, but with far broader scope.

“So for My Nintendo, of course you’ll get points in traditional ways like through the purchase of software,” Kimishima explains. “But we’re also looking at nontraditional ways of getting points just by accessing our content, wherever you may find it. And you’ll be able to use those points in some way or other to get benefits at places like theme parks, or perhaps when purchasing merchandize. There will be opportunities for these points to benefit the end user.”

“So again, we’re looking at really strengthening the connections between My Nintendo and the Nintendo Account system, as well as—and this is I think probably our number one overall goal—connecting all of our Nintendo IP within this framework and allowing our customer base to have access to our IP via this, and gain benefits from that access and that connection. I think that will be something that no other company has to offer.”

“It’s very important for us to establish both of these things, but in order for people to create a Nintendo Account, we must first make them want to do so. Connecting all of these areas, we will establish an account and global membership services that support people across the full range of growing Nintendo experiences.”

“We believe [Miitomo] is something that’s going to get people wanting to, through the use of these very well known Mii characters, speak and communicate with their friends,” he says. “And when they’re using Miitomo it’s going to be easier to do some of the Miitomo features if you have a Nintendo Account. It’ll be easier to reach out and talk to your friends. Once you have that account set up I think it’s a very easy transition for folks to want to then register for My Nintendo so they can start earning points.”

“So they’ll start earning points not only by using their software, but by interacting with our stuff, not just by purchasing software, but by interacting both at theme parks and also with merchandize. So something that’s again simple and easy for the consumer to accomplish. And then and only then, once we’ve established these roads by which consumers can reach our content on smart devices, then that’ll be the right timing for us to bring more of our Nintendo IP to that business.”

On whether western consumers will “get” Miitomo when it launches…

“First of all, I think you’re right, I don’t think we have been able to successfully communicate what we’re trying to do at this point. As you said, I think normally if you look at the smart device business, applications are not advertised, they’re not promoted, you just open up the app store and boom, there’s a whole bunch of new apps. It’s just like, ‘Here they are!’, and they’re delivered to you. Taking time and money and effort to create large commercials around smart device applications has not been part of this business traditionally.”

“I do believe that we need and want to do exactly that, though, which is why we previously announced that we’d delay the launch of Miitomo until March of next year. From now until that time we’re going to be thinking about what we’ll do to promote this application, and what we can do to make sure that it is understood by our prospective consumers.”

“The Nikkei reporter’s question to me was ‘The Wii U is not selling at this point in its lifetime as well as the Wii was at the same time. Why is that?’ And my answer was that the Wii at this point has sold over 100 million units worldwide, and even through there are people saying ‘Hey, since the Wii was so successful, Wii U is also going to be successful and it’s also going to sell like wildfire as well,’ I looked at that global install base and said that it might not sell as well. That was my response. Not that it wouldn’t sell, but that it would be more difficult because of the install base of the Wii itself.”

“The point that I was trying to get across was that Wii has sold so much and is being played by so many people, it’s not going to be easy to make them leave that and come to the next system. That was my only point, that it was a difficult task for us to bring those consumers from Wii to Wii U. But unfortunately it doesn’t look like my message got across clearly.”

On how long Wii U will remain a core Nintendo platform…

“As you know within the game business momentum is key. When you have momentum, whether it’s a platform or software, sales increase. At this point in the Wii U lifespan, we’re looking at 10 million sell-through for the hardware itself, which is just about a tenth of what we sold overall for Wii.”

“What I want to do, I think our first job right now is to make sure that the customers, those 10 million customers who have a Wii U at home have software to play. And we need to make sure that they are satisfied with their purchase and continue to enjoy playing on this platform. So we can’t just abandon them and say ‘Hey, it’s time to move on to the next thing.’ Of course we are working on NX and looking at the experiences we can bring to that platform. But first our job at this point is to support the consumers who have purchase Wii U and make sure that they have software experiences available to them.”

“A challenge that we’re facing right now is, our earliest goal for the Amiibo was to have these connected to software and have them enhance the play experience for the consumer, and for other consumers to say ‘I see my friend using this Amiibo with that software and it looks great,’ and again increase that attractiveness of that combination. What we’re seeing instead is that the Amiibo are being picked up more as a collection item at this point, rather than, say, as an interactive item with software. And so we haven’t really established them as an enhancement for all of our software at this point.”

“I think again that challenge is, how can we connect that IP to our software in general, and using the Amiibo to further enhance the play activity will allow us to get more people looking at, they see the Amiibo, they tie it back to the game experience, and then we’re creating a stronger connection with general knowledge of our IP and that fun experience they have.”

“But I do understand that the American market is a very busy, very crowded space. I went to a mall recently and saw all of the different toys that are available and I understand that it’s a crowded field. I do think that we some more room for expansion in the Japanese and European markets as they are not quite as full as the U.S. market at this point.”

“With respect to Mr. Miyamoto and Mr. Takeda, really what we want to do with the whole fellowship position in the organization is to leverage all of that knowledge and all of that experience they have, to really look at the future of Nintendo, to bring that creative force into crafting and developing what we are going to be in the future. And I’m not talking about just the next year or two, but the future, and you can hear the capital ‘F’ there I think.”

“Mr. Miyamoto, for instance, is spending a lot of time, not only with his fellow developers, but also working with Universal Theme Parks to design the Nintendo experience that will evolve there. In fact, you may even be seeing Nintendo characters more often in the clothing and shoes that people wear.”

“As far as the second big role that they have, it’s really working day to day with the talented staff that we have at Nintendo and growing and nurturing that creative force. You have people like Mr. Konno responsible for the Mario Kart series, or Mr. Koizumi who is in our Tokyo office with Mario Galaxy and so forth. So those guys are really working on that ground level, saying ‘Okay, let’s create the software we need today and tomorrow.’ And Mr. Miyamoto and Mr. Takeda are of course supporting them, but also, as I said previously, looking into the future of Nintendo as well.”

On Nintendo’s Quality of Life initiative…

“Mr. Iwata had, when he previously talked about the quality of life initiative, I believe he had talked about it being related to sleep and fatigue. And the only information I really have now is to say that the quality of life initiative is still under development, and I have no further information to share. It’s just not at the point in development where I feel I can make any announcements at this time.”

On how he won’t be a one-year president…

“I know that everyone is interested in how long I will be around. I really want to say that all the initiatives I’ve discussed with you, these are on me, these are my responsibility and I have every intention of seeing these to fruition.”

“Also, something I think that maybe was misunderstood previously was, there was talk about me being around for one year. What that was, is the board of directors, as a member of the board, the term is for one year. And at the next shareholders meeting we have to be reconfirmed as board members. That happens on a yearly basis, but there was never any meaning that I would only be president for one year in that conversation.”

“What I really want to do is work with the young and talented staff members that we have at Nintendo, and continue to nurture and grow them, so that they can express their creativity, but also so they can take on some of those management roles and become the leaders we need to take the company into the future.”