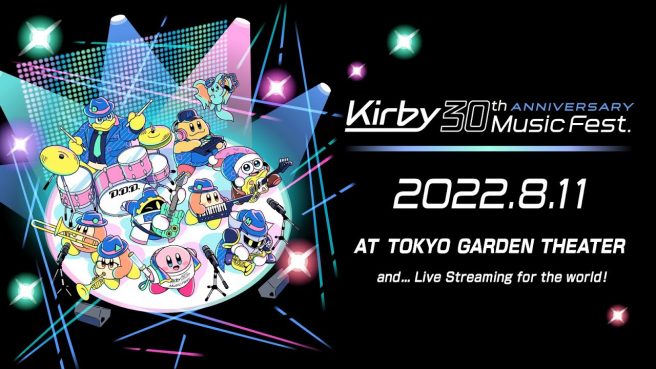 It’s just been announced that the Kirby 30th Anniversary Music Fest. will be taking place this summer.

According to the official website, this is “a one-time-only music festival will be held featuring a large big band-style ensemble of 35 musicians performing in a variety of genres”. The venue will even feature a large LED monitor with a moving Kirby.

The Kirby 30th Anniversary Music Fest. will be held in-person on August 11, 2022 at the Tokyo Garden Theater. There’s good news for fans outside of Japan though as a live stream is planned. Further information will be shared at a later date, but the video will be available in most regions.

Nintendo previously said that various plans were in the works for Kirby’s big celebration. On March 25, Kirby and the Forgotten Land will release on Switch. Other activities and promotions could be revealed in the months to come.

The first Kirby game, Kirby’s Dream Land, originally released in 1992 for the Game Boy. Nintendo and HAL Laboratory have launched many mainline and spinoff titles since then across various platforms.

The official website for the upcoming music festival can be found here.