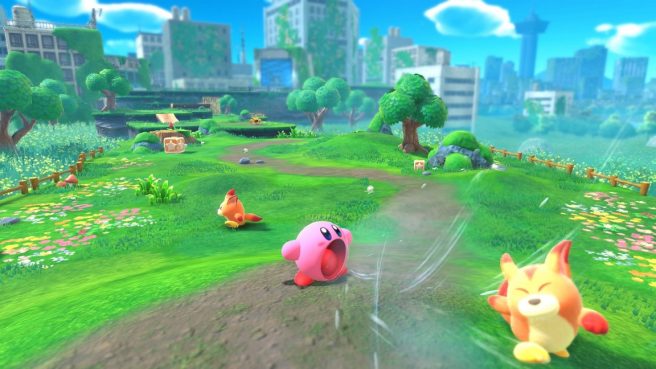 Even though Kirby has been around for three decades, the series never really tried its hand at full-on 3D gameplay. That finally changed this year with the release of Kirby and the Forgotten Land. By all accounts, the team really nailed it – but that doesn’t mean turning Kirby from 2D to 3D was a simple task.

Kirby and the Forgotten Land co-directors Shinya Kumazaki and Tatsuya Kamiyama reflected on the game’s development in a recent interview of Japanese magazine Nintendo Dream. Designer Yuki Endo was present for the discussion as well.

Kamiyama mentioned how there was a feeling inside HAL that the team might not get another chance to work on another 3D game for a lengthy period if Kirby and the Forgotten Land didn’t hit the mark. Endo also mentioned how, at least initially, “there were a lot of doubtful voices within the company”. However, Kumazaki and Kamiyama pushed for 3D and HAL realized it would be able to get things done after early development.

Nintendo Everything’s translation of the interview excerpt is below.

There must be a lot of pressure to get it right.

Kamiyama: For sure! There was certainly a lot of pressure that we couldn’t possibly get this wrong. There was a feeling that ‘If this doesn’t land, then it would be a long time until we had another chance to work with HAL Laboratory on another 3D game’, so we were so happy that we made it successfully.

Kumazaki: Of course our staff always works zealously, but we really recognized how this was a perfect opportunity. We felt we had all the capability to do it, we just needed to be given a chance. The preparations that HAL Laboratory had made with games like Star Allies were done and it all started with a feeling of this is something we’ve been waiting to do!

Kamiyama: We started with a base of our collected experiences of 3D action so far, including games like Kirby’s Blowout Blast on 3DS, and gained real insight from being the director of that game. From those experiences we knew large scale development would be needed and were able to get a concrete idea about what that would look like. This in turn formed the base of the development that would follow.

Endo: When we first started making the game, there were a lot of doubtful voices within the company; ‘Is a 3D action Kirby game really something we can do?’. But amongst the voices of ‘Let’s make the next game 2D too’, were Kumazaki and Kamiyama who said ‘Let’s go 3D!’. While thinking ‘Can we really do this?’, we made the first few images and then I was able to understand for myself ‘Yes we can!’. We made sure to keep that great feeling of knowing we can do it, in the forefront of our minds when making the rest of the game.

Endo-san, you were the level design director, what was the thought process behind making the levels?

Endo: When suddenly faced with the idea of making a 3D action game, I had no idea what would and wouldn’t be possible. So I started by thinking about how Kirby plays in a 2D space and considering those ways one by one and thinking ‘If I made this 3D how would it turn out?’ But if we simply took those 2D elements and made them 3D nothing would really change, so instead we considered each point one by one and started beefing them up to make them work in 3D.

So it’s not just a case of turning 2D into 3D then?

Endo: Even if we were able to turn it into 3D, above that was the idea that action games maybe aren’t always looked at favorably right now. So while keeping the idea of completing stages in 3D, we also created large stages to make a game where one could explore the world as they progressed. By having the opening set in a large stage we were able to effectively convey the fun of the full game.