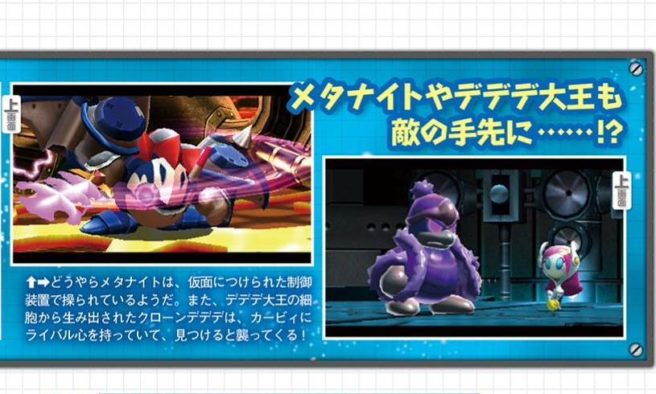 This week’s Famitsu has a two-page feature on Kirby: Planet Robobot. There’s some recap, but bits of additional information as well.

– Stone Mode: Can punch with giant hands. Other than that it can also punch the ground for a wide-range attack, or use the giant hands to defend from enemy attacks.

Famitsu also introduces a gimmick that can be moved with the Robobot. Insert Robobot’s arm to a screw hole that will rotate a platform, then spin the Circle Pad according to the direction given at top left to actually rotate it.

The last bit of new information shows how Kirby will get to fight with Meta Knight and King Dedede. For Meta Knight, it looks like he was captured and controlled by the enemy using a device attached to his mask. As for Dedede, it’s actually a clone created from his cells. This clone considers Kirby as his greatest rival, and will attack him as soon as he is found.