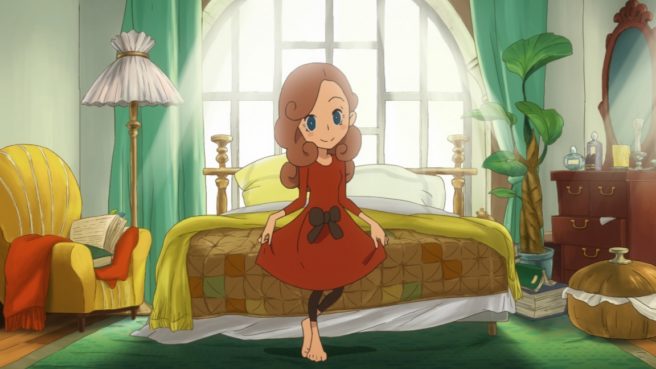 A bunch of new details and screenshots are in for Layton’s Mystery Journey. Today’s news blast covers episode 3, several characters, and mini-games. Find everything rounded up below, courtesy of Gematsu.

– An incident occurs at a movie screening where the millionaires of London such as Mayor Fremens and Clerk Gospec have gathered
– The movie being shown at the screening is a spectacle called “Submarine Attack of Love”
– Its synopsis is as follows:

“A number of incidents occur in a luxurious passenger boat boarded by two lovers. At the climax, the pair are in a desperate situation as their boat is sinking. However, it is at that time that their boat suddenly transforms into a submarine. Then they both confirm their love for each other and romantically kiss.”

– Many spectators came to the venue to get a glimpse of the “kiss scene on the most romantic deck” that everyone is talking about
– But in the movie that was screened, the ending came without a kiss scene
– Katrielle, who was visiting the venue, will seek out the criminal who cut and “stole” the kiss scene

– 45 years old, the director of “Submarine Attack of Love”
– Harry was once a low-selling director who only filmed maniac movies
– He became a popular director in recent years; has a passion for movies

– The projection technician at Rabbit Star Theater
– 24 years old He has a dull appearance, but is an excellent technician
– He is a machine otaku who especially loves visual equipment and gives a name to each machine

– The goal of the Accessory Shop mini-game is to sell out by placing “wanted items” along the route of the shop interior that customers walk
– From the entrance, the customer will move along the shortest route towards their “wanted item”
– If there are multiple routes of the same distance, the customer will go straight, then turn right
– If there is a “might as well buy this, too” item along that route, they will purchase that as well
– It is good to let customers pass through the front of the selves in order to get a purchase
– You will clear the stage when everything is sold out
– Look at the customer’s information and aim to sell out by skillfully placing the items

– Lead Katrielle’s human language-speaking dog assistant Sherl to the goal
– With one move, Sherl moves straight ahead until he reaches dead end, so you will adjust the stopping points using the “Bumpy Switches” that lift the labyrinth floors up and down
– If you reach the goal within the set shortest number of movements, you will achieve a “Perfect Clear”
– While you will aim to reach the goal using the required number of movements, there will also be mechanisms such as jumps and arrows that force a certain direction of movement