[Let’s Talk] Do you prefer playing alone or with others? 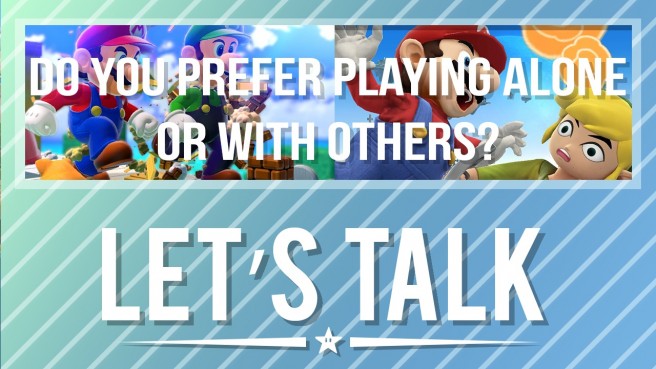 Let’s Talk #10: Do you prefer playing alone or with others?

There are two very different ways to play games. Way back in the day, is wasn’t as easy being able to play with a friend, but now that online play is being incorporated into more and more games, it’s become a very tangible option. Of course, quite a few games offer local multiplayer as well – notably titles made by Nintendo.

So what side of the fence do you site on? Are you more of a single-player gamer? Or do you prefer getting in your gaming fix by playing with others? Perhaps you sit somewhere in the middle. Do you have any memorable experiences playing alone or with friends with a particular game? Regardless of how you feel, be sure to let us know in the comments below!

I’ll kick off the discussion with my own thoughts.

Honestly, I’ve always been more about the single-player experience. I really enjoy getting immersed in a game, and the genres I enjoy the most are typically about playing alone. Platformers, adventure games, RPGs… those are right up my alley. Shooters, fighters, racers, party games, etc. focus more on multiplayer, and tend to be experiences that I’m not a huge fan of. That isn’t to say that these are defining rules. Super Mario 3D World, for example, does have a pretty big multiplayer component despite being a 3D platformer.

Even in multiplayer-centric games though, I’ve generally played through the single-player aspects much more than multiplayer. Take Smash Bros., for instance. Tons of people enjoy playing that title with friends, but I haven’t dabbled with the multiplayer much since Super Smash Bros. on the N64. The same even goes with something like Splatoon, which places the emphasis on online play. I see myself playing more via the campaign versus the multiplayer modes.

I do want to mention that I’m not against multiplayer gaming at all. Actually, it can be quite fun! Back when we did Game Nights with Mario Kart Wii and other titles, those were some pretty good times. It might be neat to bring that back one day.

Highlights from last week’s topic: What is your favorite Nintendo franchise?

The Legend of Zelda. Best series. One of my top favorite series overall.

This is tough. I’m going to go with Pikmin though. I’ve always loved the idea of exploring our world as a little person. And better yet they’re aliens so it’s all different to them. I love hearing what they have to say about our objects and fruits and even giving them new names, i.e. Strawberry is called “Sunseed Berry”. Oh and the gameplay is really fun.

This is kind of personal, but my favorite series is the kirby series. Back in the early 90s, my dad was looking for game for me for my gameboy. Usually I would play mario games but he bought me kirbys dreamland for the gameboy. I looked at the game in disgust when I first saw it, so my dad played it first. I watched how much he sucked at the game, and I watched all the cute enemies walk into him, throw bombs in his face, until he died over and over and over. He let me play, and I enjoyed the game…it was different, and I felt the need to avenge my dad and beat the game. So I reached the end, and I finally meet the main bad guy of the game, King dedede. I honestly was puzzled as to why this Daffy Duck impersonator in robes with a hammer was the final boss. After fighting him, I was in awe at how he fights you like if he was another kirby, since he knew kirbys moves. I yelled in my room in shock when dedede sucked me in and spit me out, I yelled “HEY!! That’s what I do!”. I was especially shocked by how he could jump so high to hit kirby if you’re flying to get away. I had never seen a boss that acted like the hero…it was groundbreaking to me as a child. Since this game I was after my dad to get kirbys dreamland 2, and when he got it, I was very happy. I loved the animal buddies Rick, Coo, and Kine…and I wish for them to return someday. Dreamland 2 taught me, that not everything is what it seems. I honestly thought King dedede was at it again, and I never understood why he was sleepy when I fought him. I would beat the game countless times, puzzles at the one eyed black thing at the end of the credits, saying “that’s so stupid, why name all the characters, and then put a question mark for this one eyed black thing I have never seen”. To me it was stupid how the game ended that way. I never understood the deal behind the rainbow drops, but several years later when I was 9, I got them all. Then I faced king dedede again. I was officially scared when I beat dedede, because the game’s usual ending was changed. I watched the rainbow drops purify dedede from being possessed by the one eyed black thing that was always unnamed at the end of the game for me. It was then I realized, games can have an alternate true final boss and ending. This game was no longer cute, it was scary for me. But it made me realize that King dedede wasn’t always to blame for bad things to happen. It taught me that a character can’t always be labelled as a villain for just doing bad in 1 story. Which is why King dedede became my favorite character. He is funny bird that likes to be King, even if no one agrees that he should be. He surprised me as a child and made me laugh when I would race with him in gourmet race. Things like the gourmet race and the ending to kirbys adventure reminded me that even if someone does a bad thing, they aren’t always responsible for if something bad happens, and they are always capable of doing good.

Since my childhood, I have played though all the kirby games. I will conclude with this. A grew up with an older lady in my neighborhood, in recent years. Her grandaughter had a mother that along with her room mate, abused her. This granddaughter now lives happily with her grandmother I know. I introduced to them kirbys return to dreamland and they loved the game. This older lady, even though I am not related to Her, has taken me in like one of her children. Because if kirby I introduced to her, she loves play video games with her granddaughter. would you believe she has 100% on her own time games like snowpack park wii and animal crossing city folk? I was amazed. Together, we love kirbys return to dreamland (mario is too hard for her), because you can play as a team and its easier on the players than other games. She loves to play as King Dedede, and she loves to give enemies a “headache” with her hammer, I love that haha. She labels King dedede as “our buddy” because of how funny he is and how helpful he can be in the adventure.

If you don’t believe me, I have some videos of us playing. A 3 part kirby game of us 3 playing.

So this why I love the Kirby series and I eagerly await more of them. So I will conclude with this fan art I drew for my “grandmother”.

I love almost every Nintendo franchise but the one that is my favorite and that I can always go back to its Yoshi. The Yoshi games are so calming imaginative and all around fun to play. They are great platforming games with tons of elements and mechanics that make it constantly enjoyable. Yoshi’s Story is actually my favorite in the series because of how crazy fun and innovative it is. I’m more excited for Woolly World than any other game right now.

The main Super Mario series. Many people forget that Mario has a main series because of how many spin offs he has. I love all the main Mario titles except for Mario bros 2 both Japan and U.S.A. What I love about the mario franchise in general, is that even the spin offs are masterpieces. Usually spin offs are simple cash ins on the main series but Mario makes his spin offs so good to.