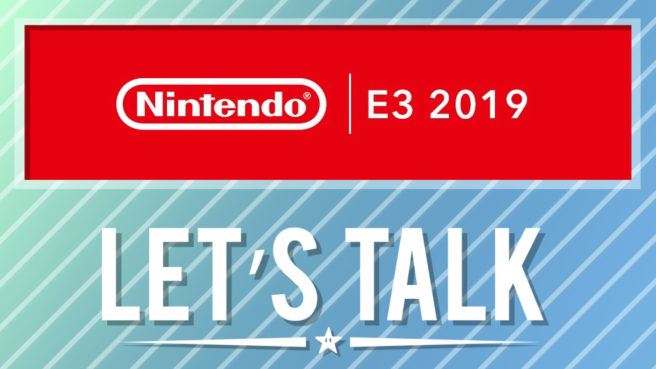 Two weeks from today, E3 will technically be kicking off. Nintendo has three tournaments scheduled for Super Smash Bros. Ultimate, Super Mario Maker 2, and Splatoon 2 on June 8. Companies will also begin to hold conferences and presentations on June 9, with the much-anticipated Nintendo Direct planned for June 11. The E3 festivities will then continue through June 13.

We’re bound to get announcements throughout the entirety of E3 week, but the Nintendo Direct is when fans of the Big N will be paying attention in particular. Nintendo has said it will focus on software planned for Switch in 2019, but we’re bound to get a reveal or two. The spotlight should also be put on the likes of Zelda: Link’s Awakening, Pokemon Sword/Shield, Animal Crossing, Luigi’s Mansion, Astral Chain, and more.

Since we’re so close to E3, we want to know about your hopes and dreams for the show. If Nintendo were to announce one new game, what would you want it to be? What are your expectations for E3 in general? Share your thoughts with us in the comments below.

A fun one for me has been Greg Heffley touching cheese…it’s gotten a lot of great laughs out of my friends and I. Also, there’s an INCREDIBLY small stage called “Tiny Battlefield” that supports 8 players and, let me tell you, it’s fantastic.

There’s also a stage I found today that was a pachinko machine. It’s a great idea that was very well executed!

A lot of people have been submitting their versions of Meta Crystal from Smash 64, which I think is pretty cool. Lots of neat sprite work in other stages, but I think my personal favourite so far is one where you’re fighting on the face of the Crimson Chin from Fairly Odd Parents.

Just saying. That kind of creativity keeps me thinking Stage Builder is a good idea despite too many idiots putting Nazi imagery in their stages because “lol, edgy joke”.