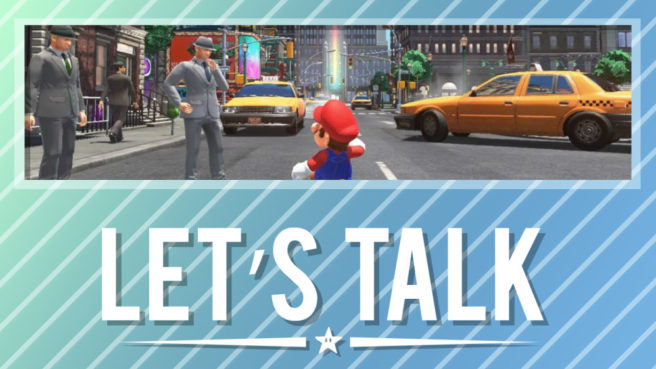 It’s crazy to think about, but Super Mario Odyssey has already been around for a month. At this point, many of you have likely completed the game – or at least reached the ending. That probably means you’ve seen a good chunk of what the game has to offer when it comes to kingdoms.

Kingdoms are obviously a huge part of Super Mario Odyssey. Each area is very distinct and has its own challenges. Some are big, a couple are small, and others fall right in the middle.

Out of the kingdoms you’ve traveled to thus far, which ones are you favorite? And on the opposite end of the spectrum, are there any that you’re not a fan of in particular? Let us know how you feel below. If you’re reading other comments, be warned that there may be possible spoilers.

Highlights from last week’s topic: What would you want out of an animated Mario movie?

I want Mario to meet Bowser and Peach for the first time in this movie, completely retconning Yoshi’s Island. Mario is born in New Donk City. He is a bit of a local celebrity due to saving Pauline from Donkey Kong. Tired of city life and some unfulfilled romance with a busy Mayor Pauline, he finds a brochure in the mail about the Mushroom Kingdom and sets off for a life of adventure.

I always imagined a Mario CG animated movie in the shape and way of Tom & Jerry style. In Tom & Jerry, the characters’ movement and expressions were in total harmony and sync with the music, which played a key role through the animation. Additionally, the characters almost never talked, and everything they meant to be said (or rather be undesrtood by the public) would be through the music and the body language and expression from the characters.
I would say that kind of animaton perfectly fits with the Mario world, with Mario, Luigi, Peach, Bowser and a big etc showing much emotion through music and body language. Mario characters almost never have voice acting, which also adds to the perfect fit to the style.

I don’t know, that idea has always wandered around in my mind.

It may be difficult to really do a full length feature film (especially without much dialogue). Depends on their target audience as well, if it’s for an older crowd I love it when they do intense fighting / character crossovers like Smash Bros (Melee intro, Brawl story, Smash4 reveal trailers).

What if they made Mario an Origin story.. Start in Brooklyn in 1977. all in animation.
Donkey Kong then after the fight with DK he falls into the Mushroom Kingdom. Everyone talks to Mario… just makes Mario noises..

Mario`s moma starts the movie telling Mario he needs to find himself a nice girl…(complete Italian cultural stereo types need to be over cooked to the point of just whakyness … After all this is an American Italian designed by a man who had never left Japan at that time. ) also this line needs to be in it, “Your brother luigi he is a never getting married. So who can make me some grandchildren.” Luigi in the background vacuuming stops and says, “Oh no!”
Mario can only say, “Itsa me Mario.” So all questions in the movie have to be answerable with that line./

I think the best thing they can do to please the fans is use as many art styles as possible. From 8 bit to Paper Mario and the 3d stuff.