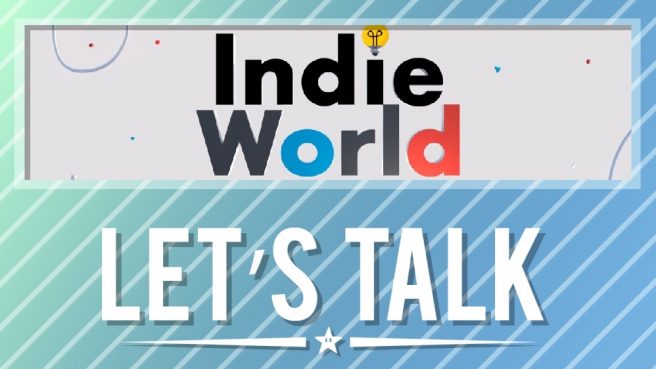 2021 is almost over, but Nintendo decided to end the year with one last presentation – that being this week’s Indie World Showcase. Fans were again treated to looks at upcoming indie games for Switch.

As is standard for Indie World Showcases, we saw some shadowdrops. Chicory: A Colorful Tale, Dungeon Munchies, Let’s Play! Oink Games, and Timelie were all announced for Switch and immediately released. Some other notable news included the official announcement for Sea of Stars on Switch, Don’t Starve Together, and OMORI being reconfirmed for the system with a Spring 2022 launch window. You can catch up on the full recap here.

With the Indie World Showcase having aired earlier this week, what did you think about the presentation? Did you have any personal highlights? Let us know in the comments below.

Boring for the most part, and occasionally grating. I actually thought there were some interesting reveals, but I didn’t care about most of them. The Sonic content was the main highlight for me, and I was just hoping that Metroid would earn SOMETHING, so I was happy it earned some extra exposure with the Action Adventure award.

I vividly remember Geoff pretending that he’d make a solid statement, then went on to vaguely be against “online hate” instead of calling out Activision for being awful, like he did to Konami for the stuff that happened between the company and Kojima. This does little good for my opinion of him, even if I know it’d largely just be lip-service anyway because of Activision’s sway in the industry.

Between this and how popular streaming has gotten, I’ve gained a new appreciation for more focused videos like Nintendo Directs that are properly paced, but I’m content to dig through my backlog and enjoy the moment instead of pining for that right now.

I wish they’d focus more on the awards than world premieres. There’s no need for the show to be that long.

In my opinion, this year’s was pretty weak. Too many cinematic only trailers. I only recall 3 trailers that I thought actually looked good to me, Forsaken, ARC, and the Matrix Aftermath. If there were more I don’t remember them.

Award wise I was glad to see Dread get one and was surprised to see It Takes Two walk away with the big one, and I think that’s great that a co-op focused game achieved that.

I wasn’t able to watch the game awards (2nd shift), but I got the gist of it through the listed winners and trailers afterwards.

In my opinion, the Game Awards could do a little more to appreciate the games that are awarded. If they could get some of the developers to appear at the show to accept the awards to where we could here them speak a word or two, I think it would go a long way.