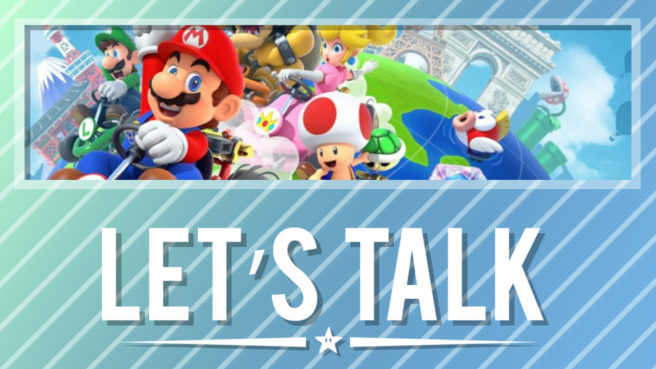 Long after it was announced, Nintendo released Mario Kart Tour on iOS and Android this week. The mobile game was originally revealed back in January 2018, and was at first expected by March of this year.

Now that Mario Kart Tour has been out for a few days, we imagine that at least some of you have given it a shot. What are your impressions thus far? What do you think about the series’ transition to mobile? Do you have any thoughts about how the game is monetized? Let us know in the comments below.

Highlights from last week’s topic: What are you playing? – September 2019

Despite good sense…Super Kirby Clash. Havent dropped a dime in it yet. Some days it feels like I dont need to, other days the game feels really greedy.

Astral Chain was a “small disapointment” for me. Playing Daemon X Machina this weekend and sometimes it feels like a fun remaster of a ps1 game but that it’ll have these awful design choices in spots and kind of ruins it.

Finally finished Torna, then I finished Minit… then I bought two more games on sale in the eShop. Super Beat Sports is giving me Rhythm Heaven vibes but many songs concentrated into a few games rather than one song variety fests. Vostek Inc. is easily eating up a ton of my time.

Other than that, I have an under utilized 360 that I’ve been trying trials for Live Arcade games to see what I’ve missed out on. Daytona HD needs to come to Switch. Hydro Thunder Hurricane I now know I need to get. Amped 3 while not giving me the 1080 Snowboarding experience I want gave me a hang glider that I could just drop my character out of from the sky and let them crash, break every bone in their body and then have the character stand up like nothing happened. And Lococycle was such a ridiculous concept that I now need to get it and experience myself (since that dev brought Ms. Splosion Man to Switch, does Lococycle have a chance?).

Oh and I’ve been trying to go back to Voez and attempt to progress the loose story, but special difficulty is killing me. At least I found a new favorite song of the game!

I bought Astral Chain on released date, but I haven’t touched it yet. I have been getting everything in Marvel Ultimate Alliance 3. That free update add a lot of content.