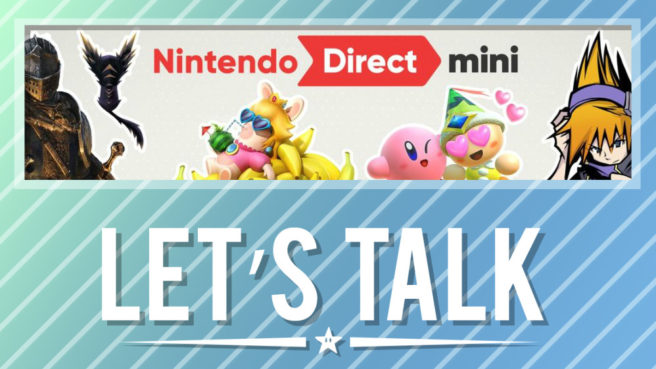 After a crazy week of anticipation and trolling relating to a possible Nintendo Direct, a presentation dropped out of thin air on Thursday. It wasn’t as big as some past presentations – no surprise there given the addition of “mini” in the name – but there were still some surprises.

What do you make of this week’s Nintendo Direct Mini? Were you pleased or disappointed with anything shown (or something that was absent)? Do you have a favorite announcement? Let us know in the comments below.

Highlights from last week’s topic: Hopes and expectations for the next Nintendo Direct

I hope for everything but expect nothing.

For this direct, I would really like a solid date on Kirby Star allies. I was going to get battle royale to help pass the time, but it’s dumb that the online mode is ranked only and there is no mode to play with friends online…so that killed it for me.

I would also like a new donkey Kong game. What happened to the Kong Family after the snowmads were defeated? Would love to see a new adventure to answer that question.

My hope is that whatever happens, it makes people happy!

At the moment, I have none
All i want the upcoming Direct to do is surprise me
That’s all