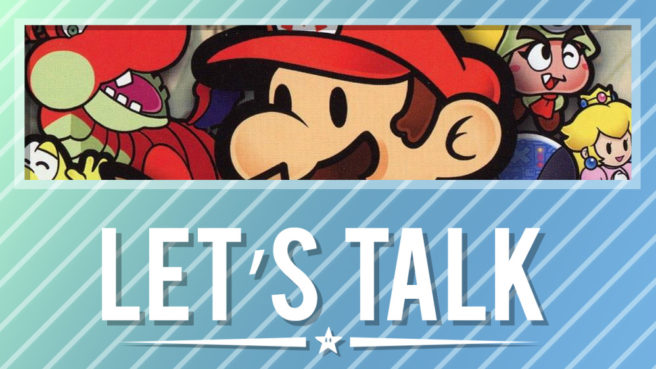 Paper Mario is in a much different place now than where it was when the series first started out on the N64. Nintendo and Intelligent Systems originally made a pure RPG experience. Since though, that’s changed significantly.

After Paper Mario: The Thousand Year Door, the franchise went in a different direction with Super Paper Mario. The Wii game focused less on RPG mechanics and more on platforming. Things then took another turn with Paper Mario: Sticker Star. The sticker mechanic unfortunately wasn’t well received, and the battles didn’t really have much of an importance. Many of Sticker Stars’ ideas then carried over into Paper Mario: Color Splash… and that’s where things end – at least for now.

It’s been four years since Color Splash came out on Wii U. If rumors are to be believed, the series will be making its first appearance on Switch at some point in the near future. The same speculation also indicated that Paper Mario will be returning to its roots.

Let’s say the rumors are true and we really are getting a new Paper Mario on Switch this year. What would you want to see out of the game? We want to hear from you in the comments below.

Highlights from last week’s topic: What are you playing? – April 2020

Finished up Trials of Mana Remake demo and I’m playing through Zelda Twilight Princess HD while I wait for the full Mana game later this month. Zelda TP is definitely an oddball in the series but I’m enjoying it so far. I know the fact that I haven’t played it yet is pretty much blasphemy on this site 😛

Gotta say I am SO looking forward to continuing Trials of Mana Remake. I haven’t had difficulty putting down a game in a long time until this. Really looking forward to unlocking classes. I started the original from Mana Collection but decided to wait because I’d rather not spoil anything before the remake. I’ll probably play the original sometime after.

A Robot named Fight and Curious Expedition, got both in giveaways, enjoying Curious expedition a little more.

Three Houses, second run on Blue Lions house.
This title is great, I don’t miss Animal Crossing at all.
Also playing 30 minutes of Zero Escape Nonary Games Collection before going to bed on Vita. Switch is missing a great title, the use of touchscreen on it is great, many titles nowadays don’t have touch interface at all.