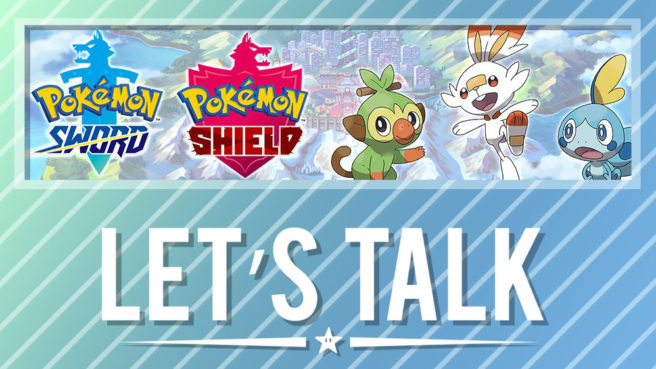 This week’s Pokemon Direct finally gave fans a look at the next generation of Pokemon games. Compared to some past reveals, we actually saw quite a lot. Not only did we get our first look at what things are actually looking like, but the three starters were revealed. Finally, we know that Pokemon Sword/Shield are launching in late 2019.

Based on what has been shown thus far, what do you think of Pokemon Sword/Shield? Which starter Pokemon are you liking the most at the moment? Let us know in the comments below.

Highlights from last week’s topic: Thoughts on the graphical style of the Zelda: Link’s Awakening remake

God I was hyped when I saw the animation. I thought that would be the art style… and then the gameplay appeared and I was confused. But after seeing it in action, I love how adorable it all looks!

Everyone I’ve seen talking about the art style are saying it looks like toys and a bit plasticy. But to my eye it looks like they are trying to capture how the game originally looked on the GB and GBC and make that HD. The intro art of the original game looks nothing like the gameplay does, so that intro style got matched up with an anime scene (but with a Link that more closely resembles Oracle or ALBW promo art rather than ALttP art). Then in game we have the dotted eyes and smaller, squarer proportions like we saw on GB originally. If I had to make a guess, I believe the photos you get for the The Travels of Link Album will have yet another alternate art style to match somewhat with the original GB art.

I don’t know if It’s lazy art but dammit if it’s not faithful to the original. There are people out there who will love this design. I am one of them.

(But I still want that hand drawn style Zelda in game form. Perhaps call up Production I.G. who did Wario Land Shake It and get them to help out again?)

I absolutely love it. Like many people pointed out, this art style is totally true to the original, just because it is so simple.

Imo this style is very attractive and i can’t wait to play this portable classic in a completely new way.

The best part of any yoshi or kirby game is the unique visual aesthetic they bring (a child’s coloring book, yarn, crafts, yarn again) and now Zelda is getting the same treatment in a gorgeous art style that manages to be faithful to the aesthetic of the game boy game.

I don’t know what everyone is complaining about, but I predict a year after the game launches they’ll be pretending like they loved it all along (like Windwaker).