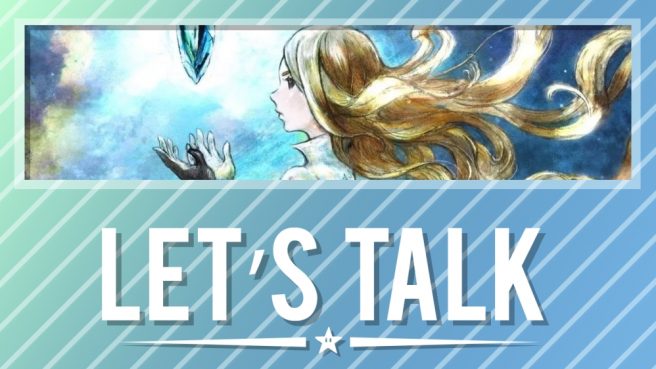 A new month rolled right on in this week. Now that we’re in March, we want to know what you’ve been playing.

Are you playing through Bravely Default II, which just dropped last week? How about some of Switch’s other new releases like Persona 5 Strikers? No matter the case, let us know in the comments below.

Handing over development of minor main series games such as remakes to a third party such as ILCA while working on dramatic new games such as Legends (and games that start a generation) is a very good strategy for the future.
I don’t mind the Diamond and Pearl remakes, the only issues I’ve ever had with those games require simple quality of life improvements that this will no doubt deliver on. Certainly using a computer will no longer require “saving a lot of data”! Would definitely be a bit disappointing if Platinum content isn’t part of it, but there’s already a large postgame to go through in the form of the Battle Zone so I’ll be satisfied.
Legends is certainly intriguing, a first for the series, but I would have to see more of it, as Breath of the Wild was not my cup of tea and anything taking clear inspiration from it will have to make alterations on the formula to sway me.
Never had an interest in Snap but more power to the fellas who have.
My worst gripe?
Where’s Pokémon Ranger???

I don’t know if this is an unpopular opinion or not but I wasn’t very excited about anything from this presentation. Snap didn’t really show anything new. The diamond and pearl remakes don’t look like they’re going to be much more than a minor visual upgrade. The Arceas game looks like they’re trying to try something new which I can appreciate, but it looks so mediocre as far as visuals and performance go. Plus, I can’t imagine that gamefreak is going to offer super innovating gameplay like they’re trying to make it seem like they are, but I hope they surprise me

I love that we got to see more of New Pokémon Snap, even though I wish they’d change the name. But, alas, that ship has sailed. It gives me hope for an eventual TCG game for a Nintendo platform or even a new Conquest game.

Diamond and Pearl remakes didn’t strike me as my cup of tea at first. I have no nostalgia for the games since they released before my return to the series. But the more I think about it, the more I like the direction they took. I know a lot of people wanted the graphics from Sword and Shield on steroids for this, but I like the art style they went for. I’m not sure whether I’ll pick one of them up, but I’m not discarding them either.

Finally, I love the idea of Legends Arceus. I’m utterly surprised they are actually moving forward with a brand new concept for them AND something a lot of people have been asking for years. The footage is a little rough, sure, but they have over a year to polish it and improve it. Even more if they decide to have a wider gap between the remakes and this.

The only thing that actually surprised me was the lack of a digital release. For the 20th Anniversary we got Red, Blue and Yellow on the 3DS Virtual Console. I thought they might release the GBA remakes or even gen 3 on the Switch as stand alone titles. That would be some easy money for them. Maybe we’ll eventually get something like that 🙂