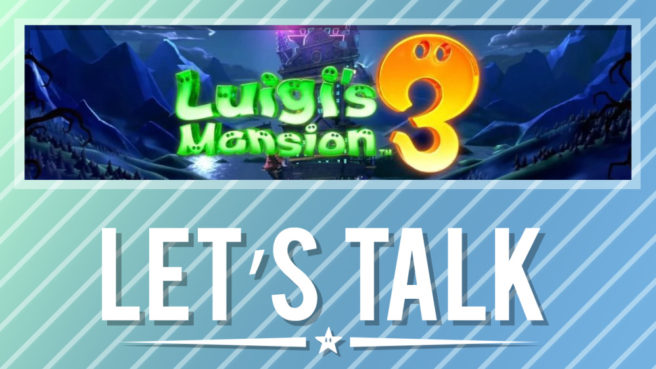 A new month rolled right on in this week. Now that we’re in November, we want to know what you’ve been playing.

Are you giving the just-released Luigi’s Mansion 3 a try? Playing any other recent titles like Ring Fit Adventure or The Witcher 3: Wild Hunt? No matter the case, let us know in the comments below.

I never expected much from Amiibo, other than to be awesome figurines of some of my favorite characters that I could stick places. I really liked that I could get little bonus flair from them in some games, but that was always secondary to the figure. I grew up when you couldn’t find video game-themed merchandise in stores, so it was awesome to get some obscure characters like Ness, Lucas, Olimar, etc. etc. My wife loves her little plush yarn Yoshi amiibo, and collected all her favorite Animal Crossing characters (for like four bucks a piece).

I have a good collection. I don’t feel like I need any more. Though, if I do find them on clearance at a store, and it’s for a character I love, I’ll probably snap it up.

I’m OK with Amiibo unlocking essentially the same sorts of things that I’d be OK with a company having loot boxes for – completely unnecessary, irrelevant, dumb flair. Locking game modes, difficulty levels, characters, etc. behind Amiibo is too much, and thankfully didn’t happen as often as I was afraid it would.

There was a time when I was frustrated that there was never a Disney Infinity / Lego Dimensions-style game; a big build-your-own sandbox where you could change characters with a tap of the Amiibo. But ultimately, that would have been a mistake; it would have put way too much pressure to get specific figures and Nintendo would have had to make far more of a smaller variety of character to satisfy people.

As time goes on, it seems like the Amiibo craze is about ended, and I think it had a good run. I’m happy it came. It did what it needed to do – give Nintendo extra revenue in the dry Wii U era, and remind people that they loved Nintendo’s IP and wanted to relate and interact with it.

I have a lot that are still unopened, haven’t really bought much for the past two year the last one being the oversized Detective Pikachu amiibo. The Shovel Knight three pack will likely be my final ones to buy and that is it, I’m done.

I love them, I have a shelf of them. But I like the functions in-game more than I like the display aspect. One of the great highlights of all my gaming years was trying a toon link amiibo in botw for no particular reason and getting a piece of the green tunic. Blew my mind. I had only heard about the Epona thing. Every day from then on I’d religiously scan every link amiibo and savescum galore. Rounding out my Mario collection the past couple years, it’s been really satisfying to go through every time I’d get a new one, and unlock like 5 different things in my favorite games. Buying Mario got me a costume in Miitopia (which I love), Mario kart (which I love), a puzzle in Picross 3D (which I love), a skin in Metroid Prime Blast Ball (which I love to death, press F for the online scene), and levels in Mini Mario & Friends (which I like). The value of them all only went up to me as more games got content. Learning here that the Metroid I had just got unlocked something in Federation Force which came out a year earlier, was another highlight. I immediately played more hours of Federation Force than I had in months because of that awesome new amiibo skin that hadn’t been datamined because no one cared about the game. It was more fun than Samus Returns, lol

But unfortunately they are dying down. Becoming more useless. I know there was huge backlash whenever something was locked behind amiibo but I always loved it. It felt like an exclusive cool club. Moreso than the actual Nintendo online service or reward program because you actually got cool stuff. Now, buying an amiibo feels exactly like the Nintendo reward program: lackluster.

Also, good grief do these things collect dust. I picked one off my shelf recently and my fingers became grey.

I like them as collectibles…but why do we only get Smash new ones? Why can’t I buy Claude or other FE3H folks?

I wish I was still a kid and could actually have them as my priority in Christmas lists again. They were so nice to have and talk about back in the day, but time hasn’t been kind to my desire for them. There’s so many of them that they have no practical uses anymore when you have over 10, and there’s just not enough room to properly or practically display them all without looking like clutter.

I personally get pretty down when I take a second and look at my collection. Each of those things cost $14 or more.

I’ve spent probably $1,400 on these things, and they just sit there collecting dust only to not be shown off or anything, because no one’s going to be impressed with a collection they don’t see value in.

Granted, the Wii U’s library was so slow to grow, leaving room for amiibo to work as a nice substitute for a lack of Nintendo’s games, but I can’t help but think of alternative uses to that $1,400 today that I really wish I’d considered 5 years ago.