[Let’s Talk] What would you like to see from a new Paper Mario game? 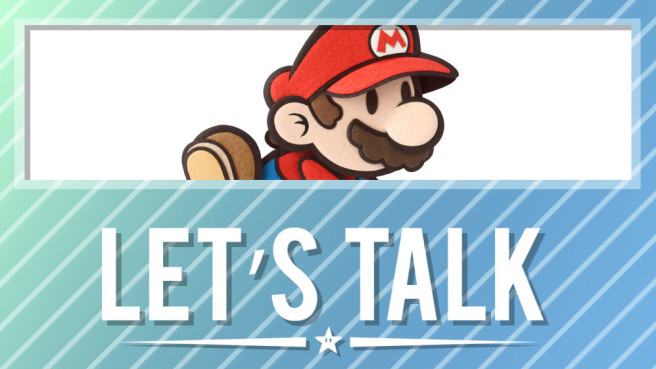 Let’s Talk #37: What would you like to see from a new Paper Mario game?

The Internet has been set ablaze over the past day or so with speculation regarding a potential new Paper Mario game for Wii U. Since it’s the hot Nintendo topic of the moment, I thought it’d make sense to have this week’s Let’s Talk centered around that.

It’s been a long time since we saw a proper Paper Mario entry. The Thousand-Year Door, a GameCube game, was the last true RPG in the series. Super Paper Mario was fine enough (I enjoyed it quite a bit myself actually), but you could argue that Sticker Star isn’t looked upon favorably despite decent reviews at the time. At this point, it might be for the best to return to the series’ roots and remember why the franchise has (mostly) been loved by so many players.

With all of that in mind, what would you want to see from a new Paper Mario game? If you have any thoughts, definitely share them in the comments below!

Highlights from last week’s topic: Do you want to see more of Linkle?

I personally don’t mind Linkle all that much, but arguments within the fandom have more or less dampened my enthusiasm over her. I like that they’re trying to treat her as her own character, but as it stands, she’s teetering between both sides of a very thin line. It doesn’t help how similar her name is, which now makes even less sense considering she’s no longer Link’s sister.

I also do not believe that what Aonuma said was meant seriously. Aonuma and Miyamoto for that matter say a lot of things, including things in jest, that end up not happening or that people take the wrong message. Kind of like when Aonuma teased “That may not be Link” in response to fan reaction over the Zelda Wii U reveal trailer, and everyone thought Link in that was a girl, and that wasn’t what Aonuma meant at all.

Sure, I like Linkle’s design, and I think she’d make for an interesting story, maybe see her as the lead roll in a spin-off Zelda game, or have her as a background character in a main Zelda game. Though I wouldn’t want to see her as an actual female option for Link, as she’s very much her own character, rather than a simple Link gender swap.
Though I’m much more interested in a “Zelda as leading roll” Zelda game. But overall, yes, I would like to see Linkle in future Zelda games, or an actual fem-Link.

Not really, I’d rather Linkle, Cia and the rest stayed in Hyrule Warriors
Should a female Link ever be used in the main games, I’d like Nintendo themselves to be the creator

Am I the only one who’d like to see Linkle appear in a main series game along with Lana/Cia, and even Volga? They all would be pretty cool to see in-game. Linkle could work out as a character you’d be playing as after you beat the main game the first time. You get to play as Linkle through a different storyline that’d intertwine with Link’s storyline some, but Linkle’s storyline would be different from Link’s in that you get new temples, dungeons, and areas in the game.