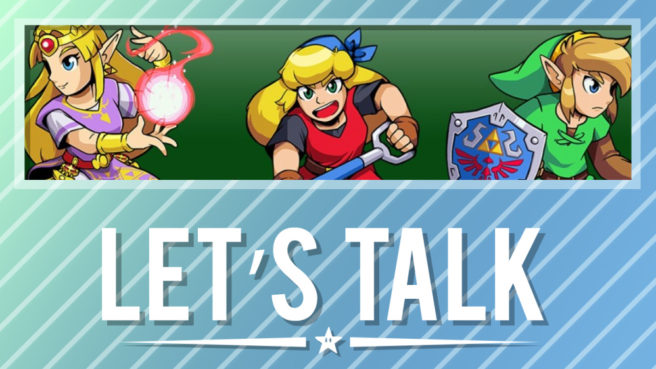 Cadence of Hyrule is in many ways a landmark game. We haven’t really seen Nintendo offer up one of its IPs to an indie developer before. This sort of announcement makes you wonder what else could be possible in the future. Now that the gates have opened, what types of collaborations would you like to see between Nintendo and other indie titles in the future? What would be the game and who would be the developer? Let us know about the ideas you have in the comments below.

Highlights from last week’s topic: What are you playing? – March 2019

Just picked up Kirby’s Extra Epic Yarn. Watched the kids play Epic Yarn on the Wii, now I’m getting to try it out on my 3DS. Still playing Dialo on my Switch.

Lately I have played and finished Reverie : Sweet as edition (I got it in a raffle at Destructoid, thanks ! ); It’s a cute little Zelda-like with Earthbound-style graphics and a New-Zealand theme. The dungeons were pretty good but it was also short and too down-to-earth for what it looks like. Overall it’s decent for the price though (some 10 bucks I think).

I got V-Rally 4 on sale (20€), it seems to be a bit at odds with the console’s hardware. Some shadows are drawn like 30m in front of the car and it can look absolutely ridiculous on some tracks where you go through canyons and the like, but it’s not that annoying most of the time, especially if you’re concentrating on the racing.
Overall it does the job pretty well, it has several different styles of races and the gameplay is good. I’m having fun with it, but I could have been unhappy had I gotten it full price because some of the decisions they took regarding rendering and graphics are pretty insane (in a bad way).

YumeNikki : Dream Diary is overall a decent remake in my opinion. It feels pretty “indie” in terms of production value which I believe makes it faithful to the original which was made on RPG Maker.
It has new linear action/survival/platforming sequences which aren’t very good most of the time and feel a bit out of place, but there’s still a lot of contemplative and obtuse and maze-like stuff too and I think it captures the spirit of the original decently. Plus it seems like it will be updated with extra areas which is neat.
It’s a pretty good trippy game in my opinion, but people should definitely watch some gameplay and seek some info before they buy it.

Finally, my main game of the moment is Valkyria Chronicles, and it’s very, very good.
The only issues I can find with it are that it’s a bit slow and boring near the beginning and that comparing it’s alternate fantasy-tainted history to the real stuff could potentially stir some issues (especially early on in the game), but that’s pretty much all I can think of.
It’s very engaging, fun to play, potentially challenging and its artstyle has aged very well. Great game.

I’m tired of Switch gaming, I played too much Smash lately.
I’ve started playing Shin Megami Tensei Strange Journey Redux, man that game is fun. I’m at 10 hours on the second sector. Much more violent than Pokémon Let’s GO XD.
And I finally finished Bravely Default, Octopath Traveller hype! (after SMT). Man, I really love JRPG. In the end Bravely is pretty bad but all the previous actions made the game worth it. I really want to play Bravely Second on a New 3DS to enjoy the 3D effect to it’s maximum!!!
#SwitchIsOverrated. 3DS has a complete library of 7/8 years.