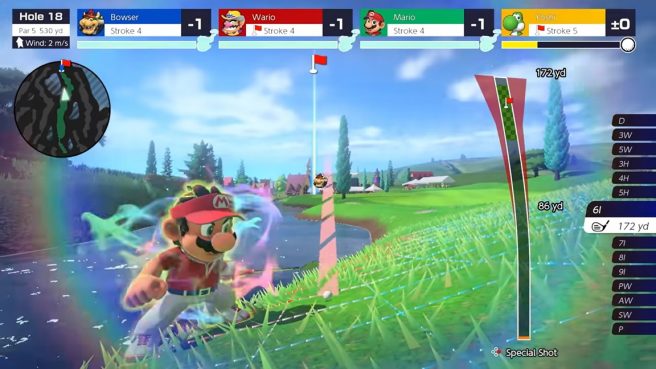 Japanese magazine Nintendo Dream recently conducted an interview with some of the lead staff at Camelot involved with the development of Mario Golf: Super Rush.

At one point of the discussion, Hiroyuki Takahashi (producer) and Shugo Takahashi (director) talked about their approach to course design for the Switch entry. In order to make the courses as large as they did in Mario Golf: Super Rush, Camelot received technical advice from the Zelda: Breath of the Wild team.

S. Takahashi: The courses are huge, too. We got technical support from Nintendo for this game.

H. Takahashi: The fields of The Legend of Zelda: Breath of the Wild were incredible, weren’t they? With the Speed Golf concept being a focus for this game, something we considered for a long time was putting all 18 holes on one course. (laughs)

In past games the screen had to be changed every hole, but the transitions between the holes in this game are much smoother.

S. Takahashi: I’ll admit I always wanted to do this, but technology at the time of each previous entry never allowed for it. Especially in the Mario Golf 64 era (laughs).

S. Takahashi: We only show it in a small part of the game, but we really wanted to make a game where you hit the ball anywhere on the vast courses. A game where if you hit the ball as far as the next hole, you’d have to go and hit it all the way back. A map the size of Hyrule Field was our goal, and the Zelda team at Nintendo shared ideas with us as to how we could get there.

H. Takahashi: Thanks to their help, Mario Golf was able to evolve. I think it’s specifically because of the maps that we were able to rework the shot system.