Posted on September 22, 2022 by Nicholas Serpa in Previews, Switch 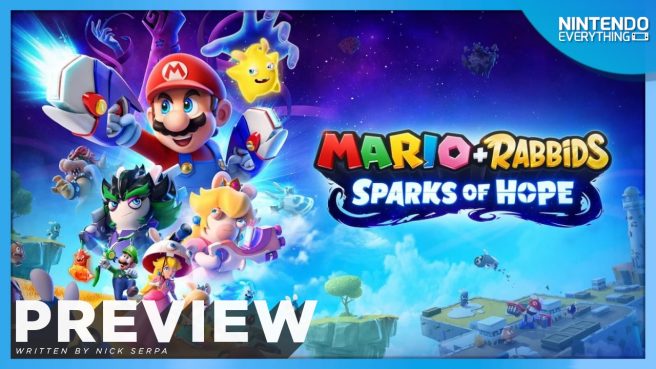 Mario + Rabbids: Kingdom Battle was one the plucky plumber’s most unexpected and off-the-wall adventures in a long time when it released in 2017; it quickly became one of my favorite games on the Switch thanks to its simple but satisfying tactics and its delightfully quirky vibes. I was excited to have the opportunity to play its upcoming sequel, Mario + Rabbids: Sparks of Hope, for nearly four hours at a recent Ubisoft preview event, where I experienced large chunks of the game’s combat, exploration, and story across a handful of different in-game planets. So far, what I’ve played of Sparks of Hope has me feeling confident that the game will be a substantial evolution of everything that made Kingdom Battle so special, and it seems poised to be Mario’s most memorable adventure in quite a while.

The first component of Sparks of Hope that stuck out to me was just how different exploring and navigating its worlds feels. In Kingdom Battle, Mario and company would traverse a tightly designed overworld filled with puzzles and tucked-away secrets as they traveled to their next tactical battle, but while the world felt grand, it was ultimately a linear experience with a mostly set progression path. That’s changed dramatically in Sparks of Hope – every planet that your motley crew of characters visits is now a dense, open overworld that allows for true exploration and provides a lot of choice as to what to do next. Of course, there’s always the main story path to follow, which involves taking on increasingly complex battles and boss fights to clear out a mysterious goop called Darkmess that is covering the planets, but there are also side quests to take on, NPCs to chitchat with, and plenty of optional battles and tucked away secrets to discover. Red coin challenges and environmental puzzles return, and later in the game you’ll unlock a tool that lets you interact with certain objects in the environment, for example, to blow up stones and cracked walls (which usually are hiding something interesting behind them). 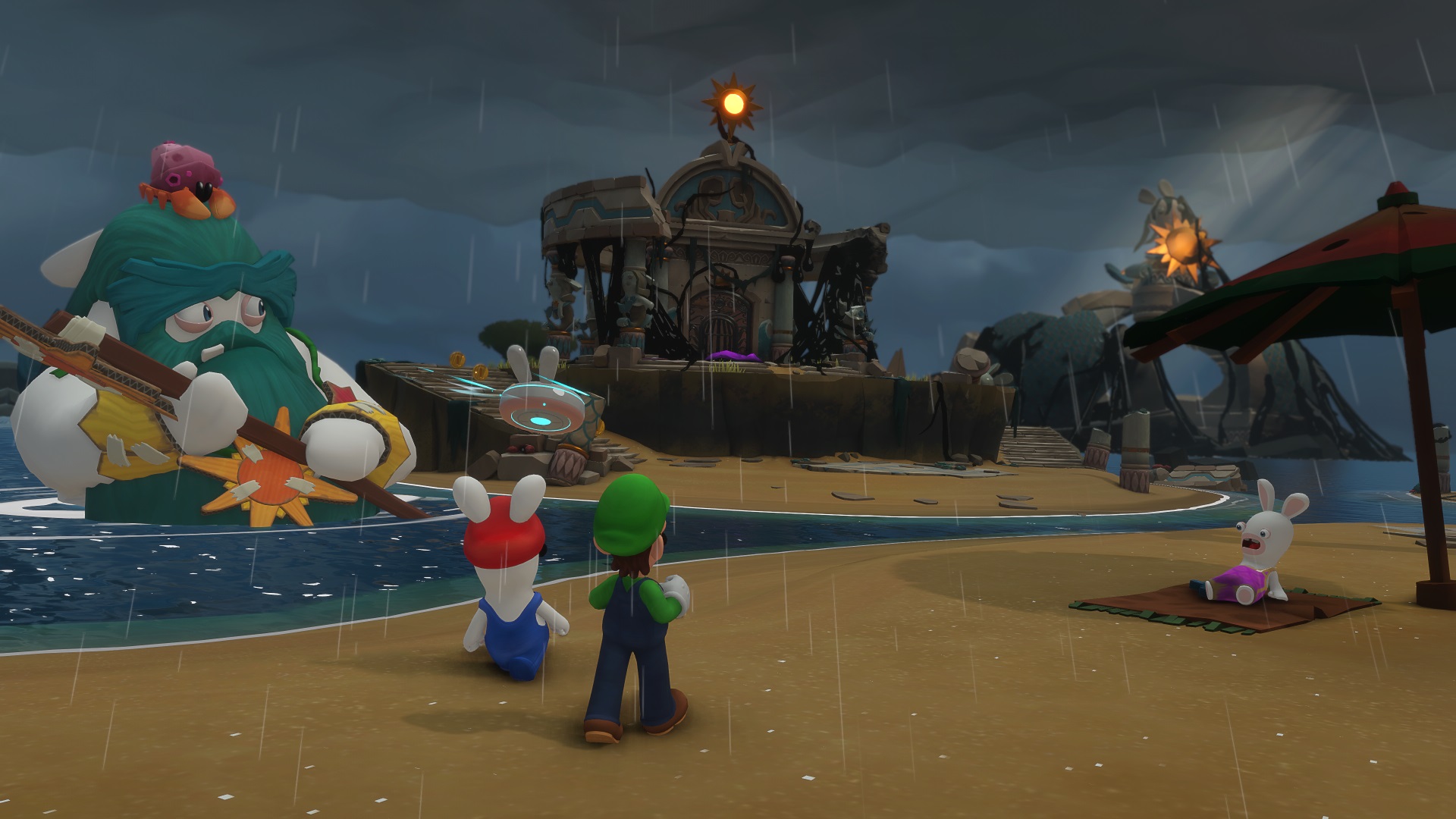 The two planets I visited – Beacon Beach, a storm-drenched tropical island, and Pristine Peaks, a dreamy snow-coated mountaintop – didn’t feel massive during my preview session, but I did get the impression that there would be a substantial amount to do within each one, and I’m excited to see just how many interesting activities are packed into each one. I will say that in this preview build of the game, walking around the overworld felt a little too slow to feel totally natural, even when running – and considering the bigger focus on exploration in Sparks of Hope, I really wish I was able to make Mario do a little jump or skip-dash to make traversal more interesting, even if there’s no practical use for it. It’s remains strange playing a Mario game where his moveset is so limited, but it’s a small nitpick for me at this point. On a positive note, there’s now full control over which way the camera is angled during exploration, which is a change I’m happy to see.

Combat also feels completely revamped compared to the first Mario + Rabbids game, and at multiple levels. The most obvious and game-changing adjustment is that the traditional grid-based map design, which has been a staple of tactics games for decades, has now been replaced with a more free-form movement system. Now every character in your battle party can move freely and in real time within a certain range of their position, without any substantial restrictions other than just how far they can move in a single turn. Not only does this result in battle pacing that feels significantly faster – although you can certainly still take your time if you want to – it makes exploring your strategic options in battle feel much more natural. For example, if there are multiple pieces of cover in your movement range, you can now duck behind as many of them as you want before attacking until you find whatever position is ideal for your situation. While I suppose it could be argued that this makes the game easier, I didn’t really find that to be the case based on what I played – rather, I simply felt like I had more flexibility to adjust my strategy on the fly, rather than needing to have everything mapped out perfectly before making a move. 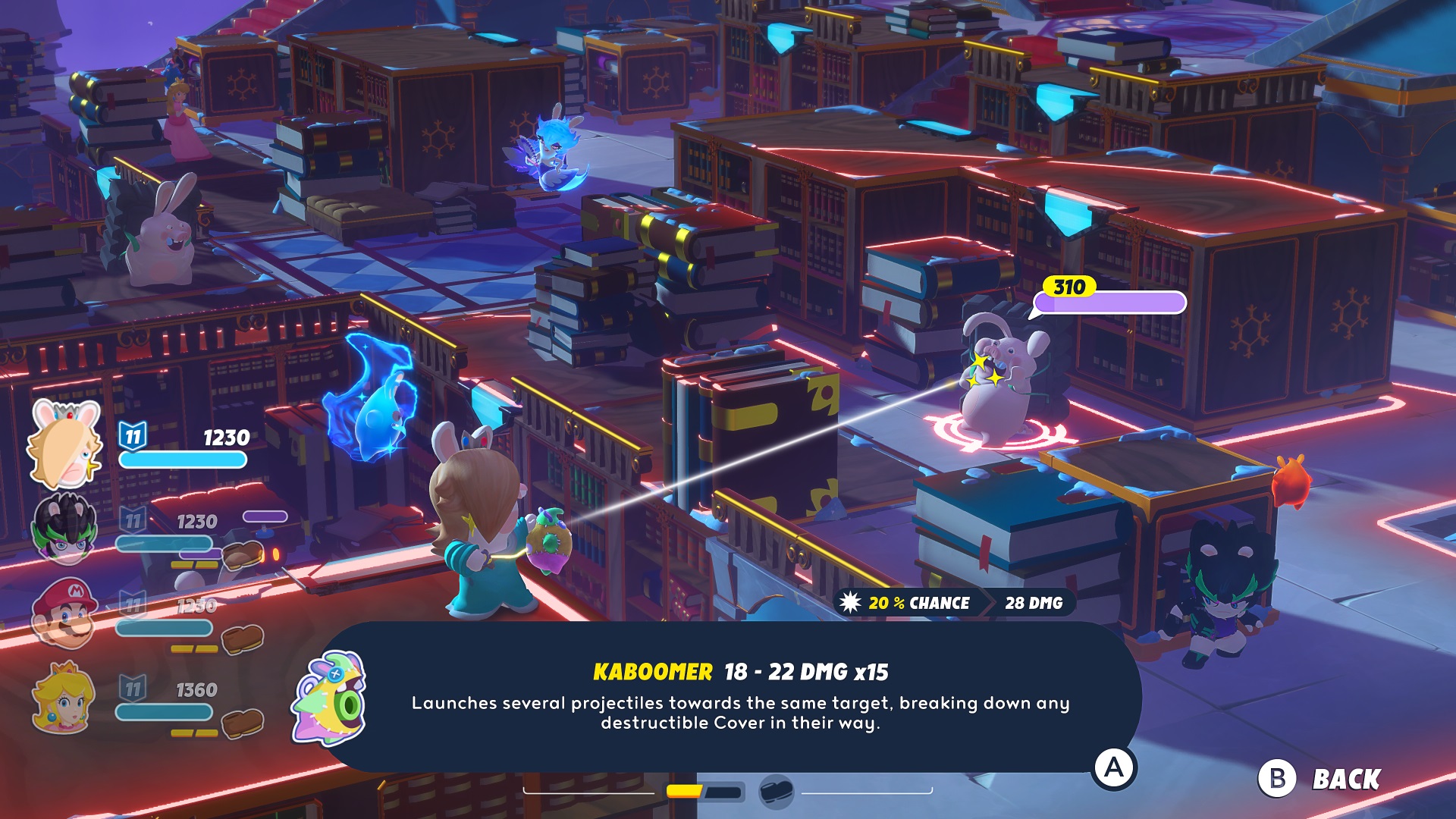 It’s also still possible to take out enemies before even touching any of your character’s weapons, thanks to some returning abilities like dashing into foes, but other moves have been tweaked and expanded to fit the new pace of combat in Sparks of Hope. For example, the Team Jump ability – which lets any character in your party now launch another teammate across the map – now lets you hover in midair before landing, giving you a few seconds to cross big swaths of the map and find the perfect landing spot. Characters can also be upgraded via their own individual skill tress to grant them even more unique abilities – for example, it’s eventually possible to give Mario a skill that lets him fall from the sky during a Team Jump, Ground Pound an enemy, and then hop back into the air to continue his Team Jump. I only saw a few of these upgrades in action during my demo, but it seems like the potential is there to build some impressively adept heroes.

The other big shakeup to combat is the titular Sparks, which are essentially hybrid creatures that are part Rabbid, and part Luma (from the Super Mario Galaxy games). These strange little fellows essentially act as equipable special abilities that can do any number of things, from transforming your normal attacks into fire-based attacks – useful for dealing extra damage to certain enemies, for example – to granting your heroes special rechargeable techniques that can damage several enemies in one fell swoop. The Sparks can be upgraded as well by being fed Star Bits that are collected in battles, so I’m getting the impression that there will be a large amount of tactical depth for players who enjoy that level of customization 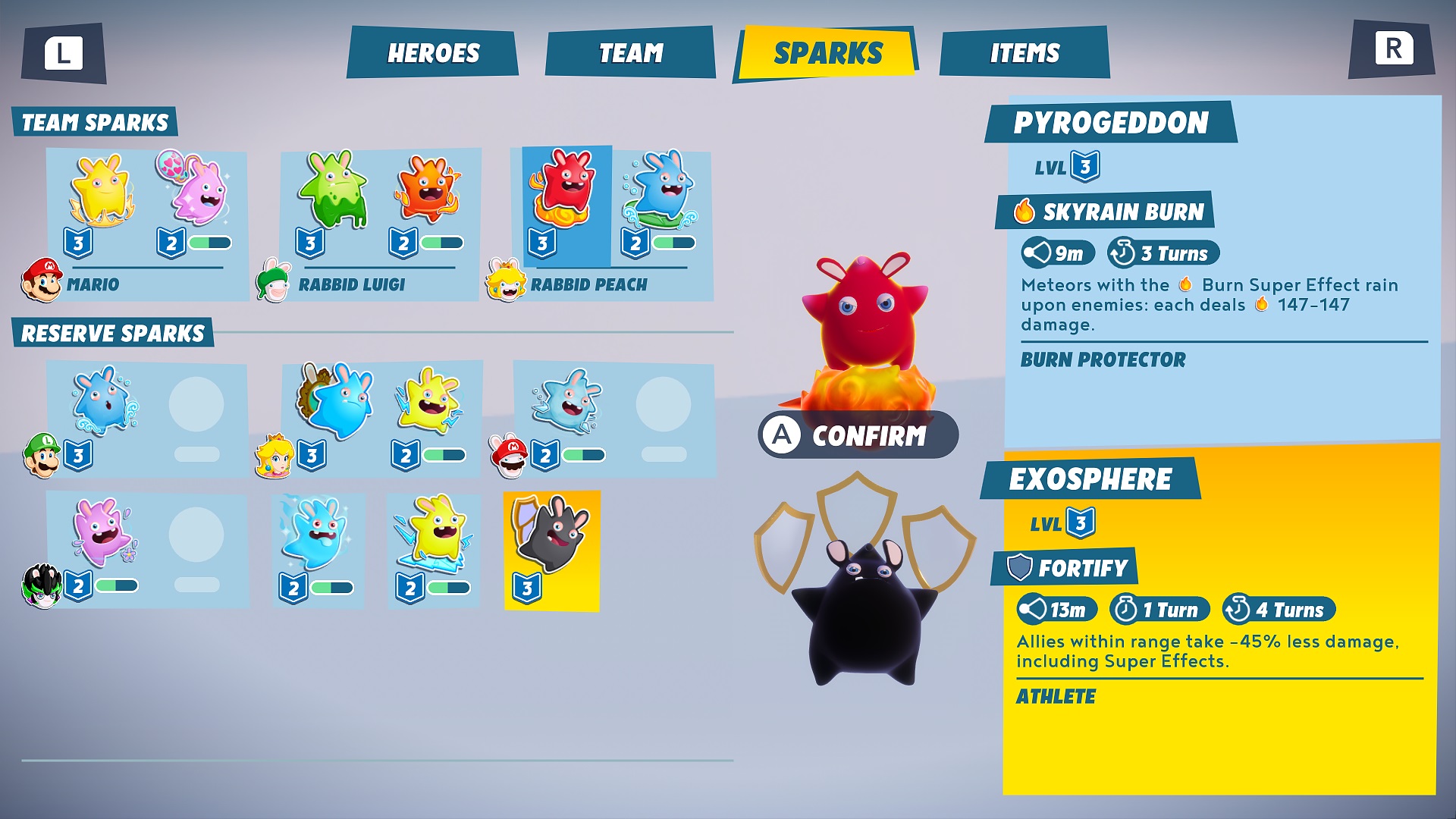 The last major element of Spark of Hope that I want to mention in this preview is how it looks and sounds, which managed to impress me at almost every turn. First, the Rabbids can talk now, and they were consistently making me smile and laugh with pretty much everything they uttered. They don’t talk all the time, but they do like to throw out snarky and clever remarks in combat, and it’s the extremely passionate voice acting that really elevates their writing to something genuinely funny, at least to me and whatever my warped sense of humor has devolved into. But on top of that, the level of detail in all the characters’ animations (even trivial ones) is remarkable, and at times more closely resembles a big-budget animated film than a game. The music is even more bombastic and energetic than in the first game, too. All of this contributed to the sense that I was playing through a truly epic adventure, one that’s at least on-par with the Galaxy games in terms of its grandiosity.

While it’s probably obvious that I’m quite keen on Sparks of Hope based on what I’ve played during my preview, there’s still so much of the game that I feel like I haven’t seen that I’m excited to experience when I review the game later this fall. Where will the story go, and how deeply will it connect to and reference the Super Mario Galaxy games? How many planets are there to explore, and how diverse and distinct will they feel from one another? How will the depth and complexity of the combat vary as the game progresses, and what other unique stages and game mechanics will we discover as we explore further into space? The fact that I’m eager to find out has me eagerly anticipating checking out every nook and cranny of Mario + Rabbids: Sparks of Hope when the game launches on Switch on October 20.