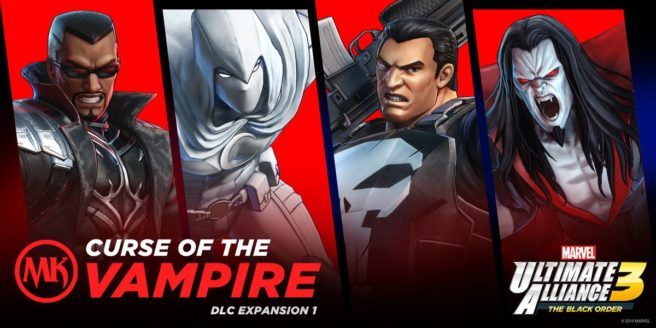 Four Marvel Knights characters will be included in the DLC. Players can get their hands on Blade, Moon Knight, The Punisher and Morbius from Marvel Knights.

Players will step into the boots of the urban vigilantes known as The Punisher, Blade, Moon Knight, and Morbius, as the Marvel Knights join the alliance. These playable characters are part of DLC Pack 1 included with the Marvel Ultimate Alliance 3: The Black Order Expansion Pass, which will be available on 30th September and also includes a new mode. In Gauntlet Mode, up to four players take on an intense series of co-op challenges in rapid succession to earn rewards. Players can find out how long they can last in Endurance Mode and see how high they make it on the online ranking board, then discover a mysterious new Infinity Rift. In addition, alternative outfits for all playable characters will be added to the game via a series of free updates, starting on 30th August with new outfits for Spider-Man, Hulk, and Captain Marvel. As previously announced at San Diego Comic Con in July, the free update to the game releasing on 30th August will also add Cyclops and Colossus as brand new playable characters.