Sakurai on how a middle ground was found between Tekken and Smash Bros. Ultimate with Kazuya 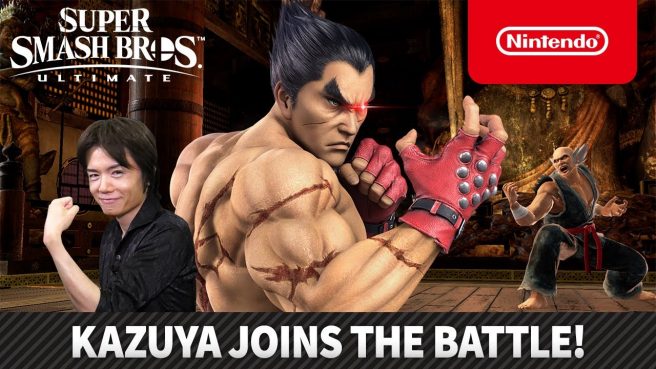 Kazuya Mishima joined the Super Smash Bros. Ultimate lineup last month as the game’s penultimate downloadable fighter. In the latest issue of Famitsu, director Masahiro Sakurai talked through the team’s thought process when developing the character in his weekly column. They wanted to go beyond simply making the Tekken fighter fit the Smash Bros. mold, and find a way to represent Tekken and its core concepts in the game as well.

Below is out our full translation of the column, which also touches on Sakurai’s thoughts on fighting games compared to Smash Bros., where combos fit in the series, and more.

Super Smash Bros. Ultimate’s 10th DLC fighter, Kazuya Mishima, has entered the ring! He’ll have probably already been released by the time this magazine goes on sale, so I hope you’re enjoying him. We released a “Sakurai Presents” video that’s a deep dive into his unique mechanics, so please check that out. We also briefly touched on this in the video, but today I’d like to dig deeper into the thought process behind putting Kazuya in the game.

The decision to add a Tekken character was a huge headache but in the end, I knew we’d make it work. An idea we had was to assign various attacks to different control directions to make it feel like you’re using moves from the original game, but ultimately that would only be a front. It’s one way to make Tekken characters fit the Smash mould, but it wouldn’t be a good embodiment of the original game.

3D fighters like Tekken and Virtua Fighter, though like Smash in some ways, are inherently different games. The former are games of distance. Players gauge the distance to their opponent and judge when either player is vulnerable after attacking. There’s an emphasis on calmly selecting the appropriate options and in some ways it’s similar to rock paper scissors. The latter is a game about positioning. You get KO’d at the border of the screen, so being in the middle of the stage is considerably different to being in the corner or in the air. it’s a dynamic way of playing and is surprisingly similar to playing marbles.

Adding Tekken to Smash wasn’t about dropping its contents into the game, but embodying Tekken’s core concepts. This time we worked with a few central principles, which in summary were:

We found that command moves from Tekken needed some adjustments because above all, they would be weak if left untouched. Leaving those moves unchanged meant they would have slow attack speed, no reach and a lot of recovery. Keeping with the flow of Smash Bros means moves need to charge up before an attack otherwise they won’t be as powerful. There are lots of moves with this drawn-out motion in Smash Bros, so this just meant we were keeping Kazuya’s moves in line with the rest of the game. It keeps things looking fresh, too

Playing around with the completed version of the Smash version of Kazuya, you’ll find that building combos is a lot of fun, and feels a lot like a fighting game. The balance was a fine line to walk, as it’s something more casual players want to try as well. This is particularly true in multiplayer fights, as you can’t spend too much time on combos when there are other players and outside factors that might get in your way.

One thought I had before the development of the first Smash Bros. is that while combos are a part of the game, they don’t involve any tactics. The reality is that in Smash, your opponent is controlled by a human, so there’ll always be an element of mind games involved. You can’t always rely on the combos you practiced which might not feel great when you’re on offense, but with mind games present in other parts of the fight it’s not an issue.

I think we found a good middle ground with the Smash Bros. version of Kazuya, don’t you?

One last important thing: I’m actually writing this one month prior to release (June 24th‘s issue). He might have a lot of moves but just use the ones you can remember.  You don’t have to use all of Kazuya’s moves, so have fun with the ones you know!