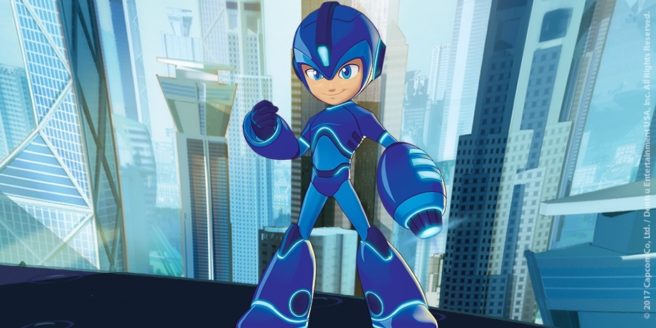 We’ve known about the Mega Man animated series as early as 2015. Yet over the past few years, there has been relatively little information shared about the show.

We do have a slight update from the latest issue of Licensing Source Book Europe. A small blurb is present in the magazine, which shows a new name of “Mega Man: Fully Charged”. It’s expected to appear at this year’s licensing expo between May 22 and May 24. Along with the show on Cartoon Network, Jakks Pacific will apparently be making a toyline.

Here’s a synopsis for the show:

“Aki Light is a regular, upbeat, robot schoolboy. He lives in the futuristic world of Silicon City, co-inhabited by robots and humans. But this robot boy has a secret… Deep within his programming lie protocols that can transform him into the powerful hero, Mega Man! When the villainous Sgt. Night and his evil team of Robot Masters emerge with ill-intentions, Mega Man dedicates himself to protecting the citizens of Silicon City.

Equipped with his Mega Buster arm cannon and the ability to absorb the powers of his opponents, he bravely battles the wickedest of villains. In this brand new series inspired by the iconic Mega Man video game, comical, action-packed adventures abound as we follow the journey of Aki Light and his alter-ego, Mega Man, as he strives to balance life as an ordinary robot boy AND an amazing superhero.”