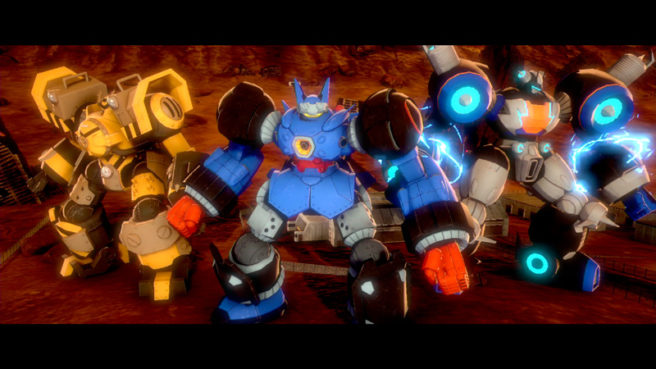 Level-5 has shared more on its next cross-media project Megaton Musashi. New details (and videos) are in highlighting gameplay, story, and characters.

– Developed in collaboration between Weekly Shonen Jump and Level-5
– Cross-media project
– Cooperative robot action RPG feature online battles where players control a giant robot
– Pilot a robot created through a concentration of Earth technologies and fight alongside friends against alien invaders
– Join forces with friends in battles against huge enemies
– Utilize your robots special traits such as attack, defense, and recovery to carry out various strategies
– Dialogue scenes between characters also occur in battle

– A support-type rogue that specializes in long-range combat

– A melee-type rogue that specializes in close-range combat

– Story about mankind’s counterattack to take back Earth from alien invaders
– In the year 2118, mysterious alien invaders called “Dracters” suddenly invaded the planet
– Within a matter of days, they gained total control of Earth
– Earth was gouged out into the shape of a donut, and the planet became an alien nest
– The humans that evacuated to the “Shelter,” a high-defense residential facility, planned their counterattack
– It was their last hope
– The power to oppose the overwhelmingly huge arsenal of the alien invaders
– … its name was Musashi; a Megaton-class giant robot
– – In order to take back Earth, three “Megaton-class problem children” that carry the burden of the planet’s future were entrusted with piloting the giant robots

– An utmost psychopath
– When he grabs the robot’s control stick, his personality changes
– Has high aptitude as a pilot, such as good judgment and reflexes

– Coldhearted narcissist
– His grades are the top of his class
– Calm, cool, and collected, he shows no weakness

– A quick-tempered and hot-blooded boss-like character
– Often gets riled up, but is actually a reliable leader who looks after his own