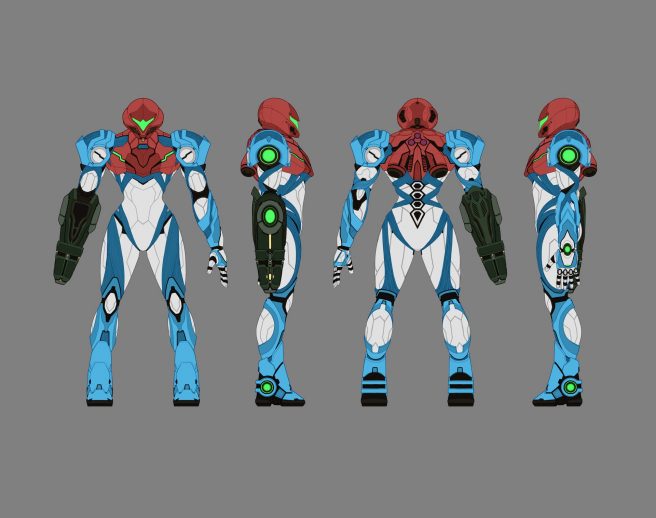 Nintendo has shared the “Report Vol. 5” for Metroid Dread. In today’s piece, we get to hear about Samus’ various powers. A new “Another Glimpse of Dread” trailer has been posted as well.

Samus Aran, the galaxy’s most powerful bounty hunter, is a consummate professional who has completed many missions believed to be impossible. In this edition, let’s take a closer look at the abilities and arsenal that Samus has within arm’s reach.

Samus lost her family as a young child after a devastating attack by the Space Pirates. The Chozo took young Samus under their wing and raised her on planet Zebes. She received a DNA transplant from this bird-like species that altered her physiology and allowed her to adapt to this harsh new environment.

Before striking out on her own, Samus was once enlisted in and trained by the Galactic Federation Army.

The true identity of the face under her helmet remains shrouded in mystery across the galaxy.

Samus is a true professional who takes a quiet and calm approach to her work. Because of this, you might think that she’s a cold-hearted person—but you’d be mistaken. In actuality, Samus is a woman with a very kind heart, as evidenced by her show of mercy to a Metroid hatchling while on a mission to eradicate the enigmatic species. Perhaps the hatchling sensed a nurturing nature within Samus when it imprinted on her.

Samus’ right arm is completely integrated with her powerful and iconic Arm Cannon, which can fire two types of weapon: rapid-fire beam attacks and powerful missiles. Because the Arm Cannon is so deeply integrated, Samus can toggle between weapon classes at will.

In the Metroid Dread game, you can attack from nearly any angle while running, jumping, or holding on to certain walls and ledges.

The beam attack is Samus’ go-to offensive ability. Acquiring upgrades can modify its power and properties, like increasing the attack’s spread or adding other functions.

One such functional upgrade is the Grapple Beam, which lends it a rope-like quality that makes the Arm Cannon capable of connecting to specific points. Once connected, Samus can tow objects or swing herself to otherwise unreachable parts of the environment.

Unlike the endless wave of beam blasts at her disposal, Samus has a capacity limit for this compact yet powerful heavy weapon. It, too, can be enhanced with ability upgrades. Samus can increase her missile capacity—thus being able to hold more—by acquiring Missile Tanks and Missile+ Tanks scattered throughout the world. Search with diligence!

Each attack can be done while running or jumping. In the Metroid: Samus Returns game for the Nintendo 3DS™ system, Samus had to plant her feet to Free Aim and fire—now, you can aim forward in a wide range of angles while running. This makes it easier to attack from a distance while on the move.

In the Metroid Dread game, most actions—like Arm Cannon attacks and Melee Counters— can be performed from nearly any position. We wished to emphasize the player being able to maintain their speed and momentum at any given time, aiming to make the flow through different types of gameplay feel as seamless as possible.

This action creates an opportunity for Samus to stun an enemy by striking it right as it’s about to attack. If successful, the stunned enemy is then open to getting hit with a powerful follow-up attack. Samus can Dash Counter while running, too.

Samus can pass through narrow passages by sliding—or by curling up into Morph Ball form.

The player can drop Samus into Morph Ball form by tilting the Left Control Stick down while crouching—effectively, the same way it’s always been done in the 2D Metroid series—and now also by simply pressing the ZL Button. Samus will also automatically take Morph Ball form when jumping into an elevated tunnel.

Samus’ unparalleled physical abilities elevate her jump actions to another level. One such action is wall jumping, where she can jump up and kick off against a wall to climb even higher.

Her jumping capabilities can also be enhanced via ability upgrades. For example, the new Spin Boost ability allows Samus to jump a second time while spinning through the air.

Samus can tap into a special, mystical energy called Aeion to temporarily use certain abilities.

One such ability is Phantom Cloak, which blankets her in an optical camouflage to render her invisible. Using this while standing still will slowly deplete her reserve of Aeion Energy—she can also move while camouflaged, but it costs a greater amount of Aeion Energy. When not in use, her reserve automatically regenerates over time.

Just like her attacks, we strived to make all her other abilities feel quick, unstoppable, and seamlessly “Samus-like.”

In particular, this time, Samus can pull off counters without losing forward momentum. This paves the way for a more aggressive use of counters, letting Samus take advantage of momentary weaknesses in enemies otherwise out of reach.

Successfully scaling walls, slipping through gaps, and knocking down enemies in a fluid series of quick movements will make you feel like the strongest bounty hunter in the galaxy.

The Power Suit that Samus wears is based on Chozo technology and was created specifically for her.

Incorporating ability upgrades can expand the functionality of the Power Suit’s performance and the Arm Cannon’s functions.

In addition to the Power Suit’s built-in defenses, Samus can increase its Energy—and thus its capacity to withstand damage—by acquiring two kinds of Energy Tank items. Standard Energy Tanks increase her suit’s Energy by 100 each. She can also collect four Energy Parts to reconstruct the same functionality as a standard Energy Tank.

Samus’ Power Suit is a one-of-a-kind article, made with the superior technology of the Chozo.

While the series has seen several suit designs, the Fully Powered Suit from the Metroid: Zero Mission game for the Game Boy Advance™ system—obtained by overcoming the Chozodia Ruins trial—is the basis for these new designs.

The events of the previous game—Metroid Fusion, also for the Game Boy Advance system—changed a lot of things for Samus and her suit, but this time, we’re using a new Power Suit to imagine what would be beyond Metroid Fusion.

IMMUNITY TO THE X PARASITE

The Metroid were created to be the natural enemy of the X parasite.

By receiving an emergency dose of the “Metroid vaccine”—created from a cell culture previously sourced from the Metroid hatchling—Samus became the only living creature who cannot be harmed by the X parasite.

Because of her immunity, Samus alone is dispatched to planet ZDR to investigate the possible presence of the X parasite, a lifeform thought to have been eradicated.

The X parasite is a terrifying creature capable of infesting any living thing, causing it to die, and then mimicking its host using the genetic information it copies.

It’s no exaggeration to say that the X is the strongest and most odious of lifeforms, as it instinctively prioritizes the preservation and expansion of its species, repeatedly dividing and merging to mimic stronger individuals.

However, the only thing that can nullify its ability is the Metroid, which was created to be its natural enemy.

Since the Metroid went extinct prior to the events of Metroid Dread, the only one who can rival the X is Samus, as she now has Metroid DNA in her.

In the second half of this video, why is Samus wearing a different suit than the one she started with? Stay tuned!

Shedding light on new mysteries revealed in an upcoming game trailer. Please look forward to it on August 27!