Minecraft receives DreamWorks How to Train Your Dragon DLC 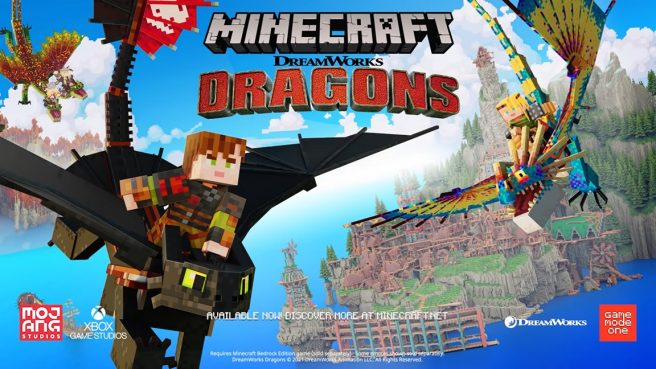 New DLC is now available in Minecraft based on DreamWorks’ How to Train Your Dragon movie franchise. It features familiar characters like Toothless, special levels and missions, and more.

Dragon riders! Grab your shiniest shield and tighten your braids; this is not a drill! We’re about to take off for the island of Berk – and all the islands in the Barbaric Archipelago – because the DreamWorks How to Train Your Dragon DLC is here! There is no time to waste. We all need to pull together to get this blocky world of ours ready for Hiccup, Toothless and all the other beloved Vikings and dragons. The DLC is out now, so nail down everything that could break by the flick of a tail and get rid of anything flammable. Can lava catch on fire? Let’s not take any chances; it has to go.

I can’t wait to take flight on one of the dragons – I don’t want to brag, but I have been confused for Toothless on more than one occasion! The people of Berk will think they’re seeing double when we soar through the skies! You can fly with all the different dragons, but if you want a change of pace or just prefer a stroll, you can explore on foot as well.

When you want a break from fun flights, Hiccup will join you on exciting adventures and missions! You can also team up with Stoick the Vast, Astrid, Snotlout and the rest of the gang to pitch in and help the residents of Berk. There is a lot to do, so you better get to it! It’s just like the old dragon saying: *flame noises*. Because everybody doesn’t get to hang out with Stormfly regularly, I have provided a rough translation in case you don’t speak dragon: The work of a world-class citizen of Berk is never done, but you’ll have a lot of fun doing it!

Vikings are known for their loyalty and fighting spirit, but also for their generosity. What does that mean for you? Well, a brand-new, free in-game Character Creator item. The DreamWorks How to Train Your Dragon DLC and free in-game item are both available today, so get ready to take flight!

We have a trailer for the new DreamWorks How to Train Your Dragon DLC in Minecraft below.