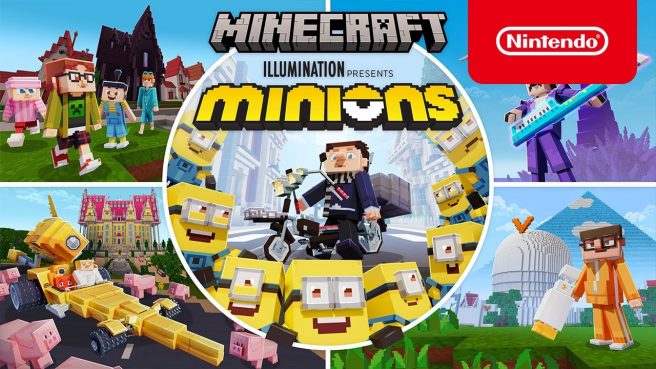 Minecraft is teaming up with another popular franchise. Players can now get their hands on DLC based on Minions, the popular movie series. It’s accessible through the Minecraft Marketplace.

Reader, listen up! I can barely contain my joy. I just found out that the Minions x Minecraft DLC is launching in Minecraft Marketplace. When? Now! Today! Why am I so happy about this? It’s not just because it’s bright, fun and filled to the brim with Illumination’s characters – led by former super – villain Gru, Lucy, their adorable three girls (Margo, Edith and Agnes) and their army of mischievous Minions. My joy isn’t simply derived from the sense of accomplishment that one gets defeating iconic villains such as Vector or El Macho. It’s not even because I can finally speak in a squeaky falsetto without being accused of being disruptive. Why don’t we take a look at the trailer, then you’ll see what I’m talking about.

Obviously, I am talking about disguises galore. These Minions know the value of dressing for the occasion. They have a look for every plan, ruse, or misadventure. Can we just take a minute to appreciate how quickly they can adapt to whatever half-hatched plan they find themselves in? You never know when you need to stylishly put out a fire or don an apron to clean a room. They are always ready, even though their outstanding overalls are a stylishly deceptive staple in their own right. They go the extra mile, and I appreciate it.

The Minions are known for more than just their outfits – they’re also pretty good, well, minions. And you’re going to need them all because the Minions aren’t the only new arrivals in the Overworld. A whole slew of villains, including all six of the Vicious 6, also known as the world’s most notorious collective of villains and breakout stars from the upcoming Minions: Rise of Gru, are here too! I know what you’re thinking. That’s too much numerical nefariousness for one DLC. But that’s why all the Minions are here! It’s up to you to decide who will cause more chaos – you or them.

View a trailer showing off the new Minions collaboration in Minecraft below.