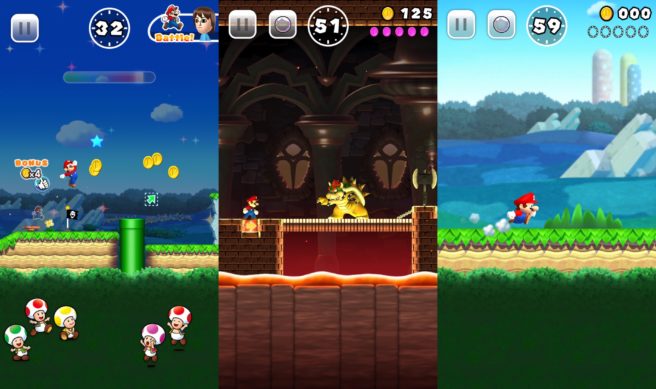 Following today’s Super Man Run announcement, TIME spoke with Shigeru Miyamoto about the new mobile title. Miyamoto commented on a number of things including the staff behind it (“mostly comprised of the original Super Mario development team”), the gameplay, connectivity with other Nintendo offerings, and more.

Read Miyamoto’s responses after the break. Be sure to give TIME’s article a look here as well.

On whether Super Mario Run is one of the mobile games Kimishima said would be arriving later this year, and the team behind it…

Miyamoto: Yes, this is one of the titles Mr. Kimishima had referenced. We don’t know if there will end up being all five of them, but this is one of the ones that we’ve been working on. We’ve consistently stated a plan to launch approximately five mobile apps by the end of this fiscal year, including Miitomo. Given market conditions and the development process for each title, our current plan is to launch four total mobile titles in that period.

So the basic premise this time was, we started by wanting to make a Mario game that you play one-handed. And if you think about Mario games up until now, generally Mario games are very simple and anyone can play them. But as you get deeper into the mechanics it gets more challenging. For some people, they have a hard time running, using the ‘B’ button to dash, or jumping while trying to run and dash at the same time. So the approach we took was, “How can we take that essence of the simplicity of Mario and bring it to mobile devices?” And that meant thinking about a game that would run automatically, on its own, but where there’s still the challenge of jumping and things like that, that are uniquely Mario.

We’ve also prepared the battle mode, as you saw, and this is really geared toward people who just have a few minutes to play. It’s a short mode you can play very quickly. And the other thing is we’re bringing in a number of elements that add skill and technique. As you get better at those skills and techniques, you’ll have a lot of motivation to compete for high scores and things like that.

On working with another manufacturer’s hardware…

So this dates back to a point in time when our hardware systems were the number one gaming platforms in the world. But now we see that smart devices have reached significant penetration across the globe. So for us as designers, our goal is always to try to bring our characters and games to as broad an audience as possible.

In addition to this game, we’re obviously still working on other games for our own hardware systems. And what’s important, is that we look at the unique features of the hardware systems. So the games being designed for our hardware will take unique advantage of our systems. With smart devices now, they find themselves in the pockets of people who don’t normally play video games, and it’s a very simple interface. So what we’ve done is we’ve looked at how we can take advantage of the uniquenesses of that mobile platform, and design a Mario game that’s perfect for that sort of simple interface and broader user base.

Of course there are other mobile devices we’ll be bringing the game to later. But with the Apple devices, their hardware design is such that there’s not much you have to do from a compatibility standpoint across multiple different devices. It’s very streamlined. And I think just from a philosophical standpoint, there are elements of their design that are similar to ours. So that’s why we’re bringing it to iPhone first.

In addition to all of that, we’re working with [Japanese mobile and e-commerce provider] DeNA on a portion of the game, which are the elements of growing and expanding and customizing the Mario gameplay.

On any connectivity with Miitomo or NX…

We’re not planning on any connectivity with this game, and partially that’s because for our own hardware, we take responsibility for the hardware and ensuring the functionality is serviceable over the life of the system. When we bring in the hardware of another company, it’s tough to guarantee what another company is going to do with their hardware.

But we do have the My Nintendo system, and so Super Mario Run will potentially have connectivity with My Nintendo and allow you to access, for example, your friends list and things like that. And then also on the kingdom-building side of the gameplay, there may be some opportunity for us to access that data and do something with that on our own devices.

So of course as you’ve seen with Pokémon Go, we have millions of people who may never have played a Pokémon game, or maybe just knew the name Pokémon, who are now playing that game and learning the names of each individual Pokémon. And the result of that is that we’re also seeing sales of things like our original Pokémon Red and Blue games on the rise as a result of that. We think we’ll see a similar effect with Super Mario Run, and especially as we continue to develop Mario games for our own platforms that have more robust action and those sorts of elements, we think those will be appealing to the audience playing Super Mario Run on mobile devices.