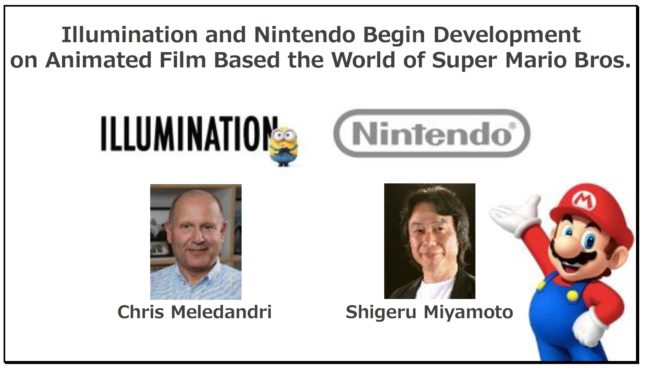 After the negative reception of the Super Mario Bros. film in 1993, Nintendo put the breaks on pursuing movies. Yet now after so much time has passed, the Big N is giving things another shot. Illumination is on board to create a brand new Mario-based movie with Despicable Me producer Chris Meledandri. Nintendo is overseeing the process and Shigeru Miyamoto is heavily involved.

As part of a lengthy interview in Famitsu this week, Miyamoto spoke about meeting Meledandri for the first time and how that eventually led to the Mario film. One of the important parts of their conversation was when Meledandri brought up a past failure, which convinced Miyamoto that he could be trusted.

Here’s our full translation of the interview excerpt:

Miyamoto: When we started our partnership with Universal, I heard that the CEO of Illumination, Chris Meledandri, wanted to meet with me – he was also signed with Universal. So I met with him and talked. He brought things with him that I had mentioned in interviews in the past to say that our ways of thinking and doing things are one in the same.

—He was very eager.

Miyamoto: I didn’t know what kind of angle he was getting at, but I’ll never forget when he talked to me about why he had failed before. That’s when I thought, “I think I can trust this guy.” That was right around the time I was considering movies, so we decided to have him do the animation for us when he said, “What do you say? Let’s make something together.” It took a really long time for things to come together, but we finally found our way.

—What was Chris’s “failure” that he mentioned?

The new Super Mario Bros. movie is currently planned to debut in 2022.