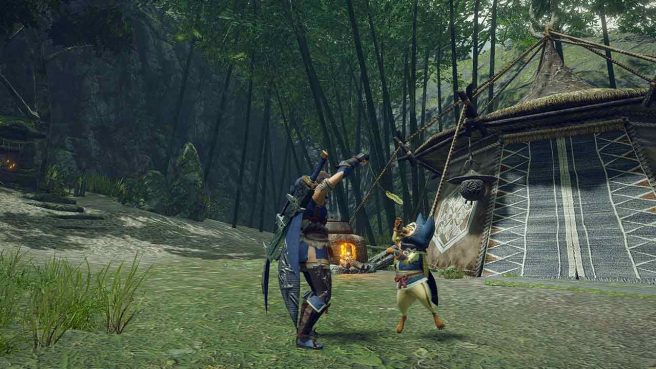 Touch controls were a staple of many handheld Monster Hunter entries, which left many fans wondering why the control options weren’t quite as expansive in Monster Hunter Rise. In a recent interview with Nintendo Dream, Monster Hunter Rise director Yasunori Ichinose explained that as the Switch is a hybrid console, control choices largely stemmed from the fact the team had to develop with both handheld and docked play in mind.

Below is a translation of Ichinose’s full explanation, as well as other tidbits he shared about developing the game on Capcom’s proprietary RE Engine.

With the series’ latest entry being a Switch release, were there any hardware differences you had to work around?

We looked for ways to play around with control elements unique to the Switch, like its touch screen. If you really think about it, we had to develop for two styles of play: docked and portable. In docked mode for example, you’re unable to use the touch screen, and we made sure the game was playable even without those things. A remnant of that design can be found through the ability to target monsters through touch.

Those things can actually be used. We experimented with handheld mode options that only require players to extend their thumbs while playing. The game should be playable without those functions though, so we made a conscious effort not to use those hardware features.

It’s only natural that performance changes with hardware. The truth is that the hardware was not the only thing different from World, the engine changed as well*. We tested what we could to see what kinds of processing speed we could achieve. Rampage mode in particular is one of the game’s selling points, which has a lot of monsters appearing at the same time. We did a number of experiments to see just how many we could get to appear on screen at once. We also spent a lot of time and had a variety of unique shaders made to see how beautifully we could make things look on the Switch.

It’s surprising to hear that the engine AND the hardware were different.

Prior to our testing, the frame rate couldn’t break 10 FPS, and motion was very sluggish. We continued to test and improve it until the very end, where we were able to achieve 30 FPS. We also had some members of the technical team who were working on the game engine within the company provide support, and they gave us some ideas and solutions.

Monster Hunter Rise is currently available on Switch. You can also read comments from Yasunori talking about the game’s development history and some 3DS origins here.