More details on The Legend of Zelda Game & Watch clock, including videos and screenshots 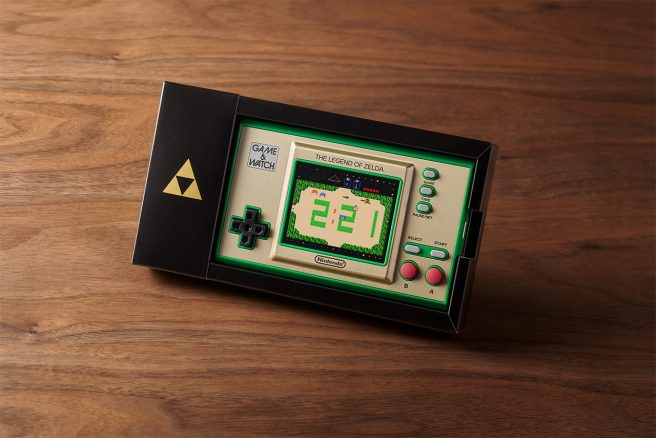 To start- when the clock screen is pulled up, the first Legend of Zelda game will display and change its environments based on the time of day it is. There are several variations of this, such as night and day scenes, but there are also special events that occur at unique times like when all the numbers are the same at “2:22” (an example of this can be viewed below).

There is even a climatic battle with Ganon everyday at 12:00! All of these events can either be played automatically or controlled by hitting a button. This is similar to how the music works, and a click of a button can toggle on and off the music in the background (as seen below).

Finally, there is a playable timer that features levels in the style of Zelda II: The Adventure of Link. There are 3 stages that can be played in this timer: forest, desert, and temple, and just like the clock, a button can be pressed to control the character or let it auto-play. There is even a counter to see how many monsters can be defeated before the timer runs out (a video of the desert stage is below).

Each stage also has different monsters in it, so they all offer a unique challenge. Additionally, there is a Time Attack mode that has a set number of monsters to defeat and players can compete to log the fastest time (a play through of this mode can be seen below).

The Legend of Zelda Game & Watch is set to release on November 12, 2021 and a ton of screenshots relating to this article can be seen below. For more information, feel free to read from the original article/source linked here.

More: Game & Watch, The Legend of Zelda, Zelda II - The Adventure of Link