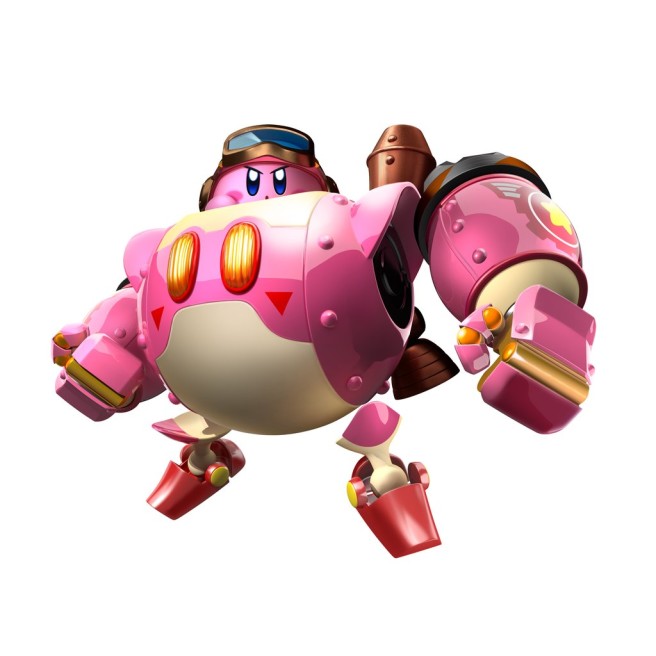 Following this week’s Nintendo Direct, the Japanese Kirby: Planet Robobot site opened. More details about the game are included there.

In Kirby: Planet Robobot, Haltmann Works Company which controls a robot army turned Kirby and his homeland Planet Popstar into a world mixed with mechanisms. Kirby goes on an adventure to return the world to its original green nature.

As previously mentioned, Kirby can ride the mysterious machine left behind by the enemy, which newly transforms to Robobot Armor. It can scan enemy abilities and transform accordingly to become stronger. There are various actions by copying abilities. Kirby can not only suck and spit enemies, but by swallowing them he can also copy their abilities. By using these abilities well, players can take a shortcut to the goal.

With the Robobot Armor, Kirby has more dynamic gameplay like progressing with brute force crushing big blocks on the way, or moving special gimmicks. Like Kirby, Robobot can scan enemies to change Modes.

There are also stickers spread all over the courses, which can be collected to customize the robot.

By scanning amiibo, Kirby can obtain a copy ability. You can also obtain healing items from amiibo. Any amiibo can be scanned to produce an effect. Some amiibo have random effects, while some others are implied to have fixed effects. For example:

And here’s an overview of Kirby: Planet Robobot from the North American game page:

Harness the power of a mysterious mech to stop the ruthless Haltmann Works Company from mechanizing Kirby’s home world. Smash through tough obstacles, lift heavy objects with ease, and scan enemies to shape-shift into new Modes with powerful abilities in this supercharged action-platformer!

That’s right—Kirby’s Robobot Armor can shape-shift into different modes by scanning enemies to copy their moves—like the new Jet Mode. Not to mention, Kirby™ can copy abilities the old-fashioned way too—by inhaling them! After saving the world, team up with three friends to defeat foes in Team Kirby Clash, an RPG-styled 4-player brawl where you choose from varied classes and level them up. Need a quick fix? Take on challenges in a 3D space and aim for a high score in Kirby 3D Rumble. Ready for a challenge? Play as Meta Knight in a blazing-fast time attack mode to fight new bosses and tougher enemies while Kirby takes a well-deserved nap!

– Use the mysterious Robobot Armor to scan enemies and shape-shift into powerful Modes
– Kirby’s copy ability returns, allowing him to inhale, spit out foes, and transform
– Employ new and improved Copy Abilities including: Doctor: Use clip boards, throw pills, and mix concoctions; ESP: Wear a cool hat and use psychic abilities; Poison: Spray toxic mists and other noxious abilities
– Super Smash Bros.: Gain Kirby’s updated Super Smash Bros. move set
– Use the Download Play feature in Team Kirby Clash, an RPG-styled mode for up to 4 players (or sharpen your skills by playing solo)
– Enjoy a selection of additional game modes, including Meta Knightmare Returns (note: tap amiibo in this mode to heal Meta Knight), Kirby 3D Rumble, and The Arena
– Collect hidden code cubes and stickers in every level and use the stickers to decorate your Robobot Armor