My Nintendo adds No More Heroes 3 posters in Europe 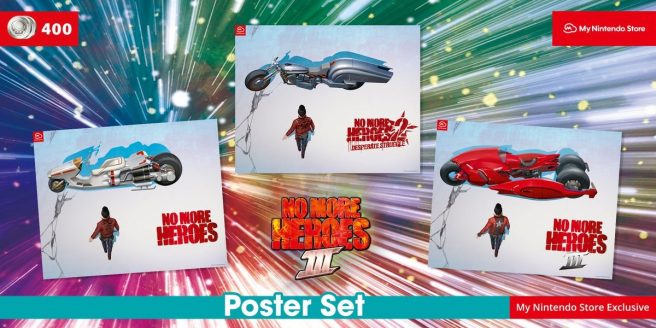 My Nintendo is celebrating the launch of No More Heroes 3 in Europe with a new poster set. Three designs are included, with each one paying homage to the series’ different entries. The developers at Grasshopper Manufacture were said to have been involved with the posters’ creation. You can see the designs above.

Nintendo mentions that the full set is rolled and packed in a sturdy box. Additionally, each poster measures 40 x 50cm. As for the material, it’s 170g/sqm glossy coated art paper.

At the moment it’s unclear if the poster set will be offered in North America. My Nintendo rewards sometime vary between regions, though it’s possible that this item will be extended stateside at a later date. We’ll let you know if we do end up seeing the set in North America down the road.

For those in Europe, you can order the No More Heroes 3 poster set on My Nintendo here. It’ll set you back 400 Platinum Points. Note that there’s a shipping charge which is the norm for all rewards these days.

No More Heroes 3 just launched on Switch worldwide yesterday after it was announced in June 2019 at E3. A roundup highlighting some of the early reviews can be found here.