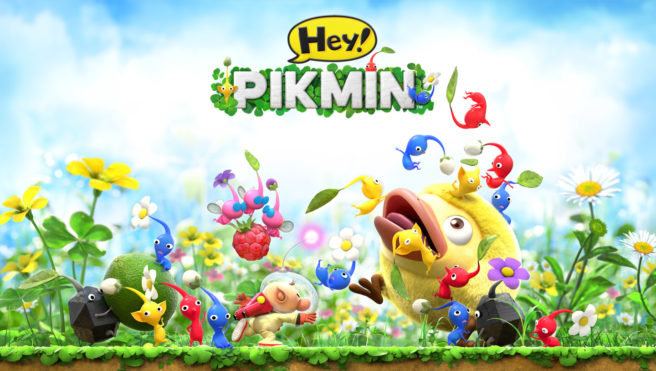 This week’s issue of Famitsu contains a new Hey! Pikmin preview. The magazine covers the game’s story, amount of levels, and more.

To start off, Pikmin types and abilities are as follows:

– Red: Strong against fire and can move on fiery places
– Yellow: Strong against electricity and doesn’t get paralyzed; can also fly high when thrown
– Blue: Strong against water and useful in underwater explorations
– Winged: Can fly with its feathers; multiple winged Pikmin can allow Olimar to fly
– Rock: Can destroy hard objects

Captain Olimar is still the protagonist of Hey! Pikmin. Olimar’s rocket was hit by a meteorite swarm while he was warping back home, and it fell towards a certain planet. He meets Pikmin on this planet and tries to collect 30,000 kilas for rocket fuel together with them in order to escape.

Controls in this first ever side-scrolling action Pikmin game basically amount to using the touchscreen. You touch the whistle button to call Pikmin, and press the jetpack button to hover. Touching anywhere else on the lower screen lets you throw Pikmin to the specified location.

Thrown Pikmin will aid you in defeating enemies as well as solving gimmicks. They can also carry treasure to Olimar when they are in a position that he cannot reach by himself. An example of a treasure is the Harmonic Monica that’s worth 400 kilas.

The planet in this game has eight areas in total, each of which has four blocks (term for levels in this game) along with an additional hidden block and as a boss block (so a total of six blocks). When a block is cleared, another block is unlocked.

The area screen has an amiibo icon at the top left. Nintendo’s new Pikmin amiibo is planned to be released on the same time as the game. Scanning the amiibo will let player call Pikmin anytime.