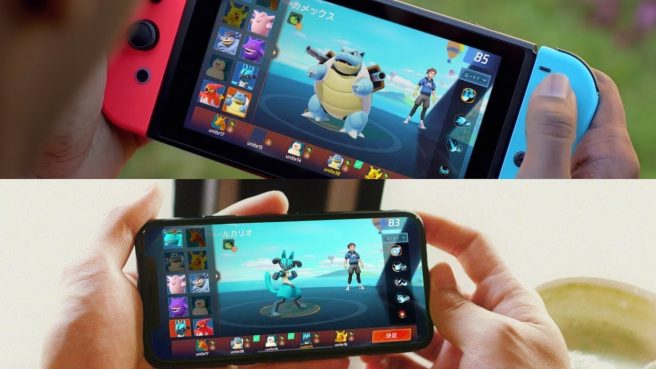 Pokemon Unite, a strategic battle game, was announced for Switch and mobile earlier this year. A new batch of details and screenshots recently surfaced as part of the second wave of the internal test. Although it was meant to be private, some players have shared their experience online.

– There are 5 basic roles in this game: Strike/Power, Support, Standard/Balancer, Defense, Speed
– Each of the Pokemon characters is divided into 3 types of usability: Beginner, Medium, Advanced/Master
– There are 2 kinds of attack distance: Short-range Attacks & Long-range Attacks
– List of the Pokemon can be sorted by the order of release time or by the order of recruit time
– Pokemon evolves at level 5 and level 7 (if it can evolve twice)
– Pokemon learns new moves at level 1, level 3, level 5, or level 7
– You can only choose 1 move from the 2 alternative ones each time from the same move group (like basic moves group and powerful moves group, the higher the level is the move powerful moves you can learn)
– There is one basic move from the beginning, and when you learn the third move, the Pokemon will forget its basic move
– At level 9, Pokemon will learn the unite move as its third move
– At some point during the battle, powerful wild Pokemon will show up in the center of the map
– Legendary Pokemon like Zapdos and Pokemon from Gen 8 like Drednaw all debut in this section
– If you defeat these types of Pokemon you will get more points than other wild Pokemon
– Items like Rare Candy or Sitrus Berry will randomly drop on the map; they all have special effects on Pokemon

Pokemon Unite does not currently have a release window. You can find the game’s official announcement here.