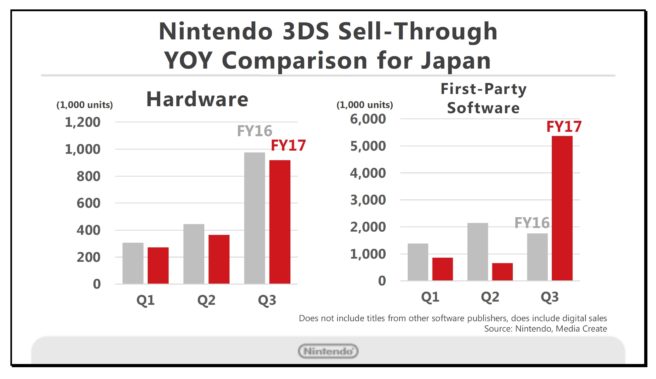 This graph shows Nintendo 3DS hardware and software sell-through in Japan from April 2016 through the final week of the calendar year, divided by quarters and compared year-on-year. In looking back on the life-to-date performance of Nintendo 3DS, hardware spread through the Japanese market first before the U.S. and European markets. For the first two quarters, both hardware and software maintained lower trends than the previous year, but for the third quarter, which also includes the holiday period, the release of Pokémon Sun and Pokémon Moon drove software sales higher than the previous year, and hardware sales did not lose momentum.

Note: Due to the calendar differences, FY16Q3 contains one more week than FY17Q3. Note: FY = Fiscal year (April through March of the following year) 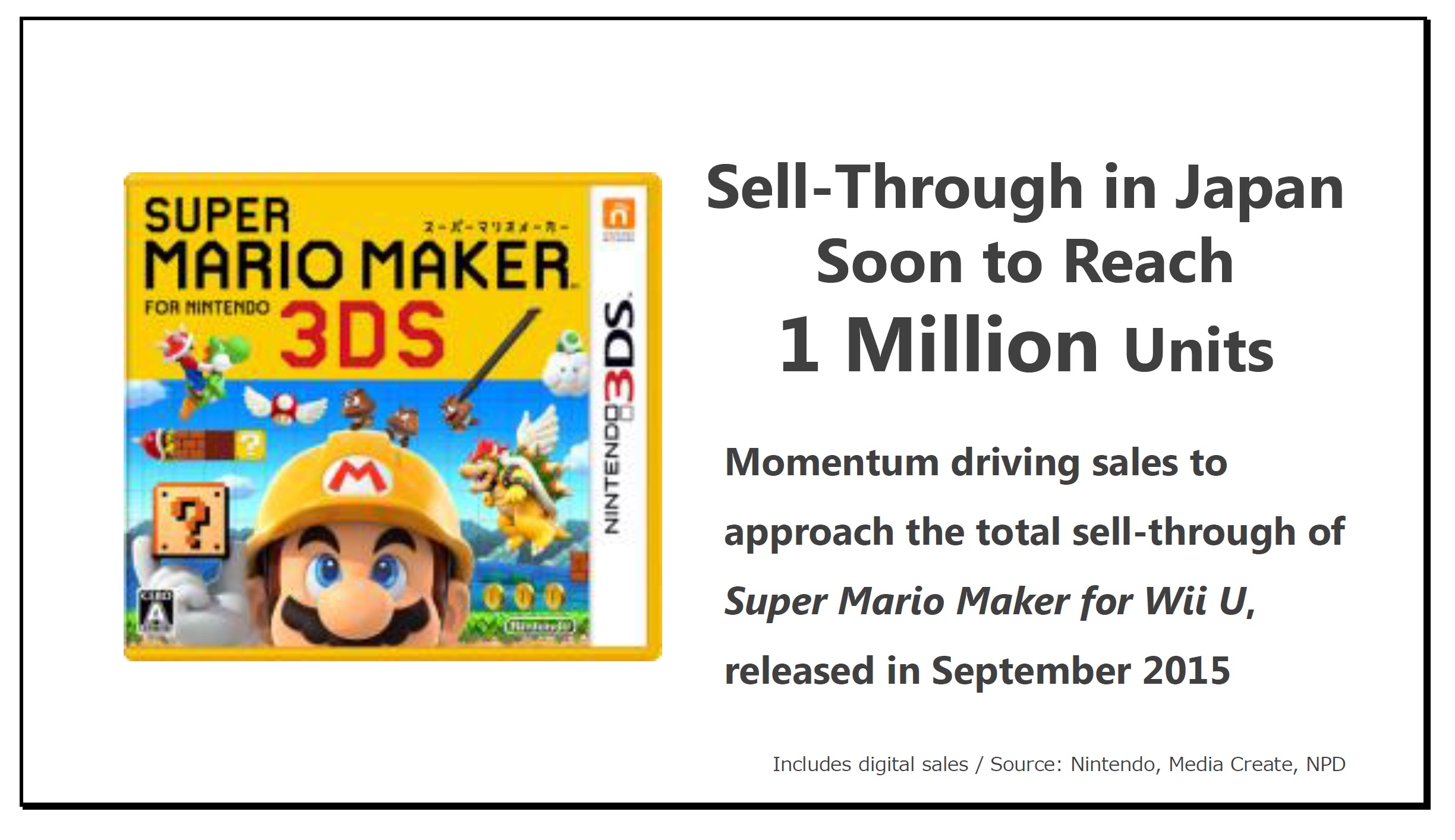 Super Mario Maker for Nintendo 3DS, released in December last year in Japan, continues to sell well and is expected to become a million seller soon. In Japan, this title has the momentum to close in on the total sell-through for Wii U version, which launched the previous year. We were able to reach consumers who own a Nintendo 3DS system, but
who do not own a Wii U system. This shows the size of the latent Nintendo 3DS market. This title is also off to a good start in the U.S. and Europe, where it was released in December as well. 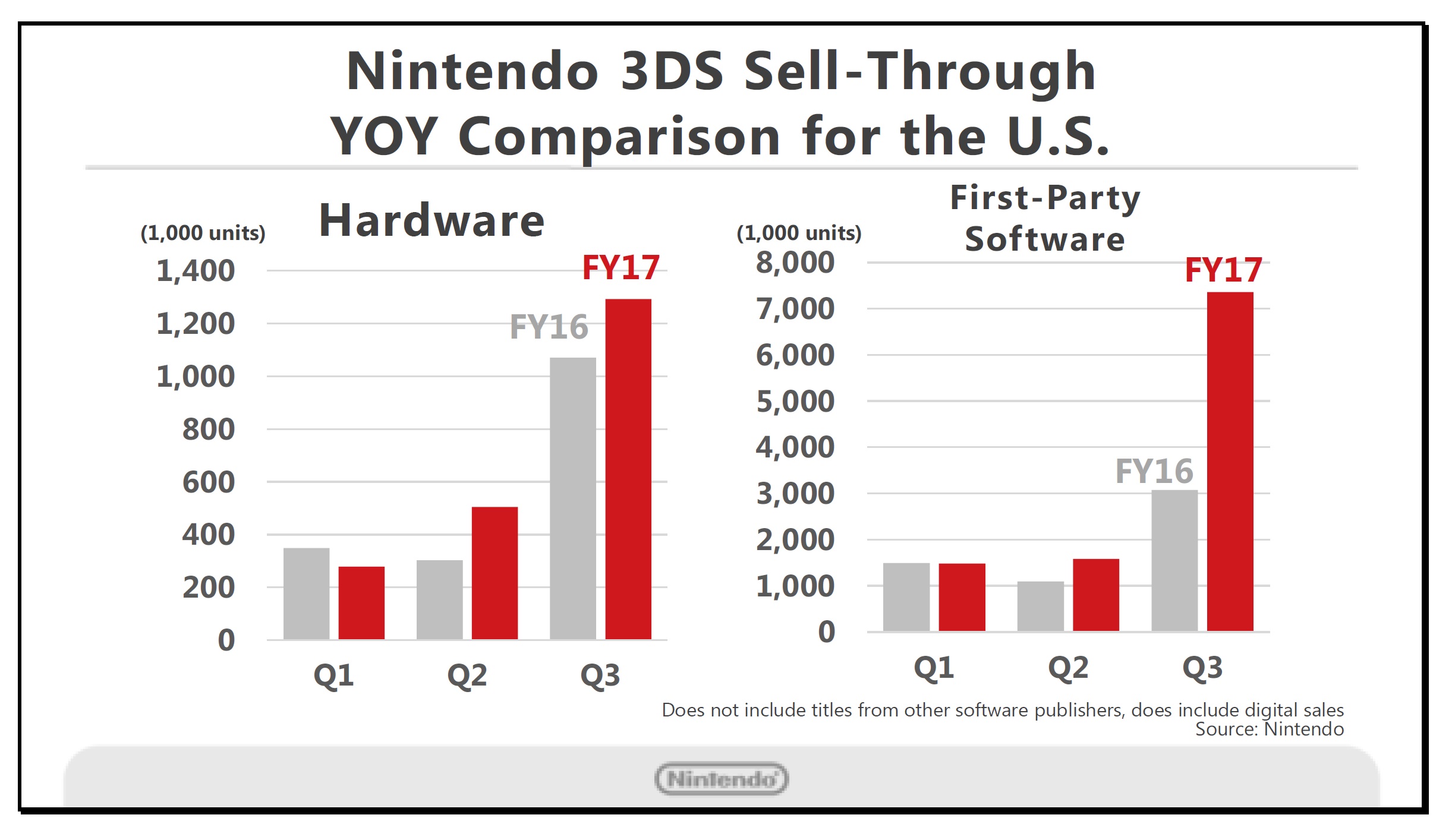 This graph shows Nintendo 3DS hardware and software sell-through in the U.S. compared with the previous period. In the U.S., promotional activities aimed at children and parents were effective at increasing sales. We believe we were able to assert brand presence during the holiday season, including Black Friday, through Pokémon Sun and Pokémon
Moon. This was the sixth year-end period since the launch of Nintendo 3DS, but major titles continued to drive hardware sales, and sell-through of hardware and software for the entire year was up compared to the previous year. 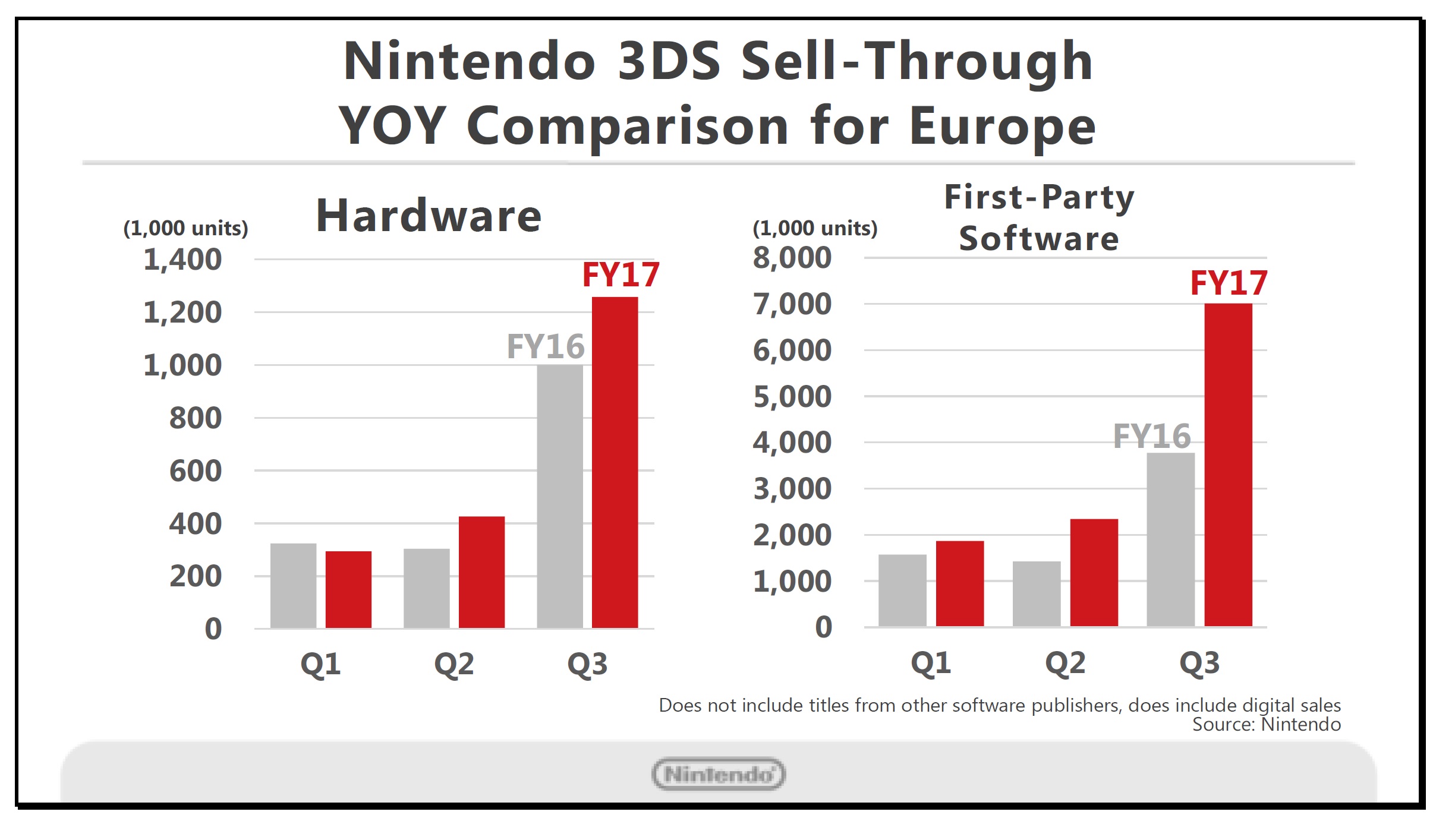 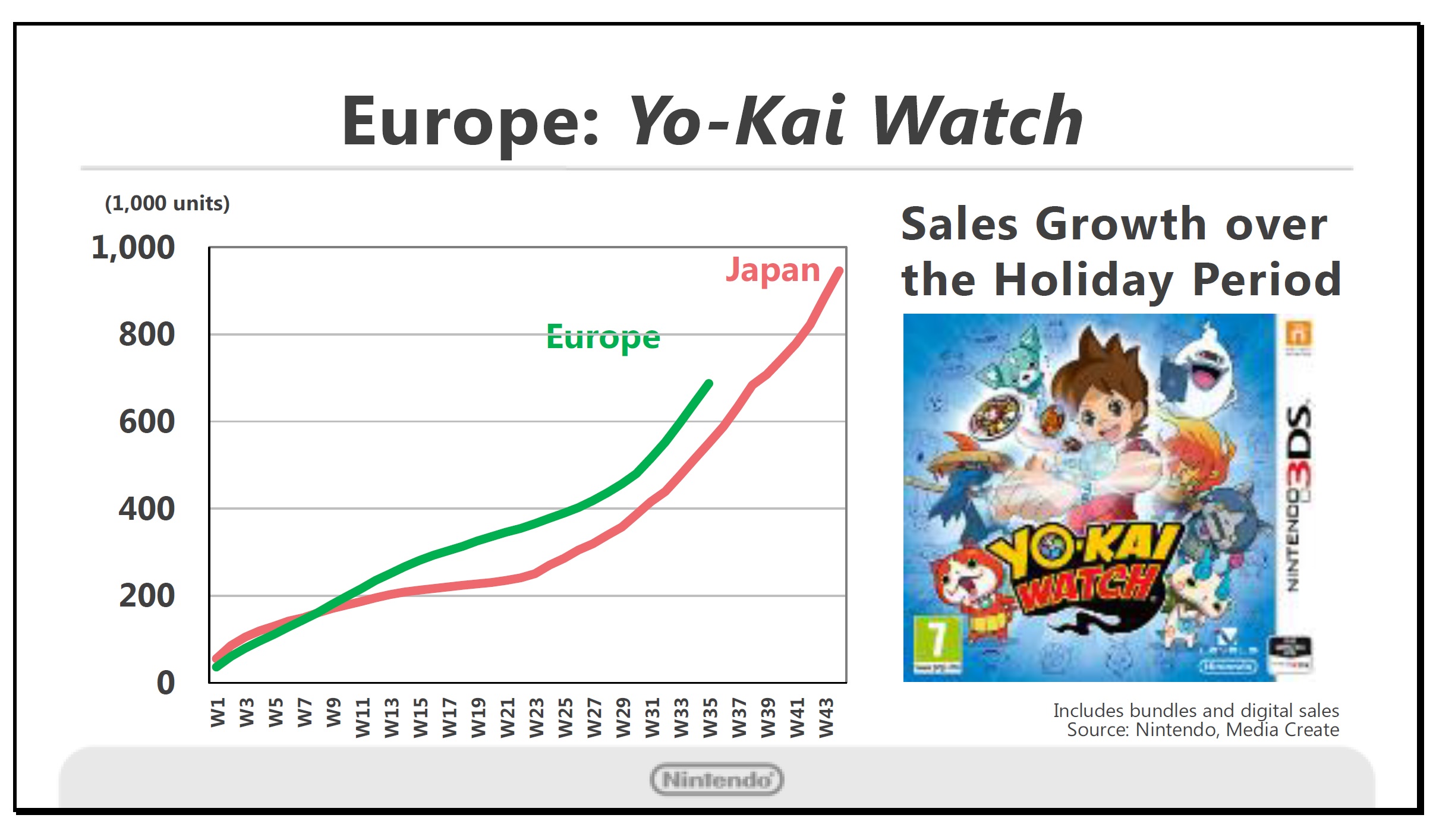 We have previously shared how the first title in the Yo-Kai Watch series, sold by our local subsidiary in the European market, was released in April last year and quickly surpassed initial sales of the Japanese release. This graph compares the sell-through in the European market with the earlier release in the Japanese market. Sales growth has maintained momentum even through the holiday period in Europe. High demand from children hoping to receive this title as a present has produced measurable results. The animated television show is also expanding to more regions, so we can expect further growth from this franchise in the future. 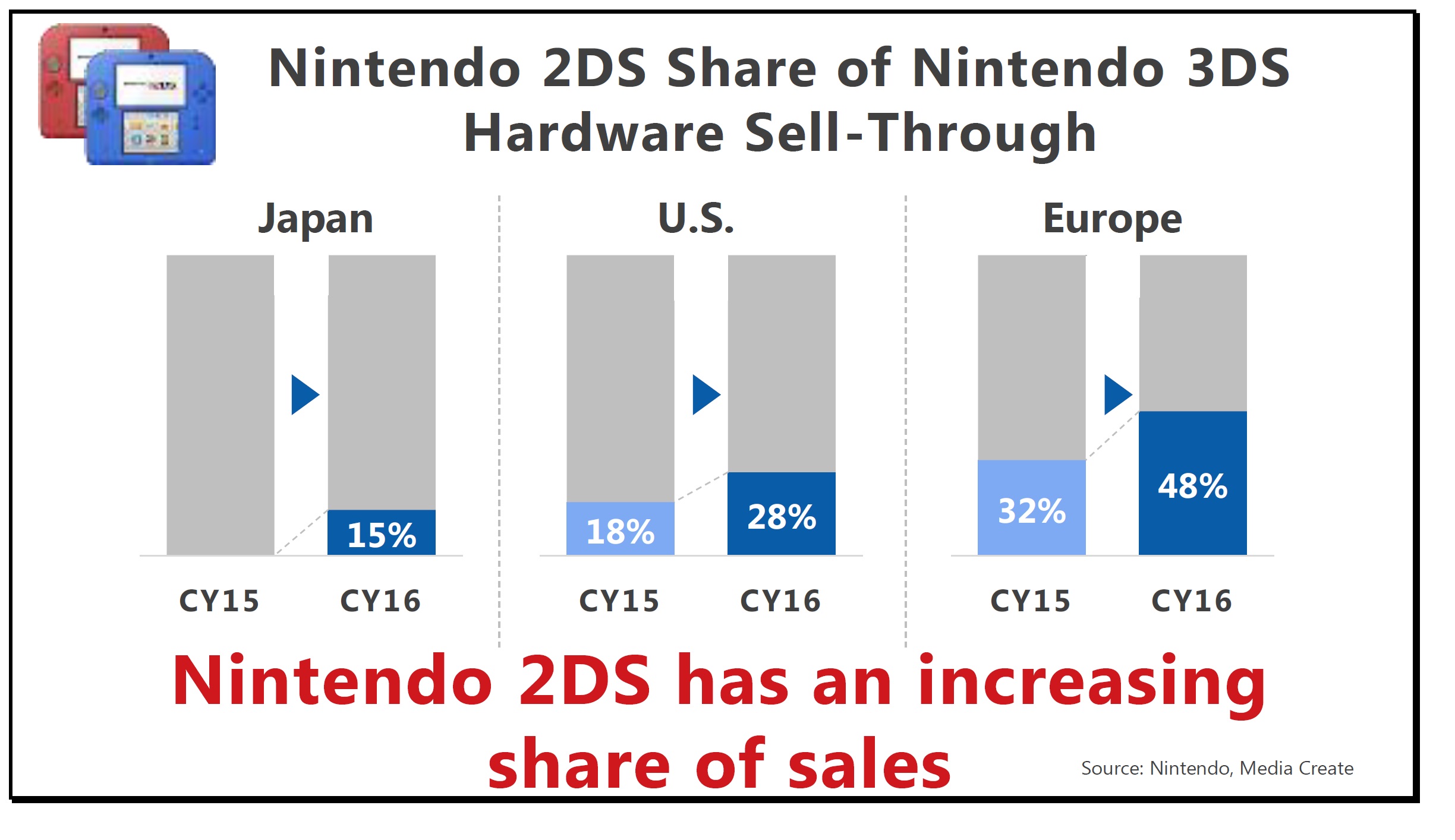 This graph shows the share of Nintendo 2DS within the total Nintendo 3DS hardware sell-through per region, compared with the previous period. Nintendo 2DS is offered at an even more affordable price than other hardware in the Nintendo 3DS family, and children can easily enjoy playing with it as their first game system. It launched in the Japanese market in September last year. We reduced the price of Nintendo 2DS in the U.S. market in May last year and saw an increase in sales that exceeded our expectations. As you can see, the share of sales held by Nintendo 2DS has grown over the previous year in the U.S. and European markets.