A big issue with these spas, though, is that just because you happen to get into one doesn’t mean your safe for the time being, as hunger also plays a part throughout your adventure. You’ll need to collect food before, during, and after dungeons as your Belly Meter will slowly but surely make its way down, and when it reaches 0 your health begins to drop little by little as you starve. Omega Labyrinth Life has this insane way of making you blessed but stressed at the same time, and I can’t say I appreciate it much.

As you kill enemies you have the potential to increase your Bust Size – all the way up to a tumorous Z-cup – through the Omega Power you acquire, allowing for bigger attacks and stat bonuses until you leave the dungeon in which cup sizes will return back to normal. One second the girls are losing their minds in a flummoxed yet impressed way that they’re getting larger (especially the Loli girls), allowing you to play with them as they transform like Sailor Moon but in super slow motion, while the next I’m getting insta-killed by a lightning-manipulating robot, and lose all of my stuff immediately afterwards with no way to reset since it auto-saves right away, overwriting your manual saves. How can I feel like I’m being loved in Nekopara, Clannad, or If My Heart Had Wings one second, only to be ruined and desecrated like some sick Bloodborne and Battle Toads hybrid the next? I don’t know whether to commend the developers or sue them for emotional damages. 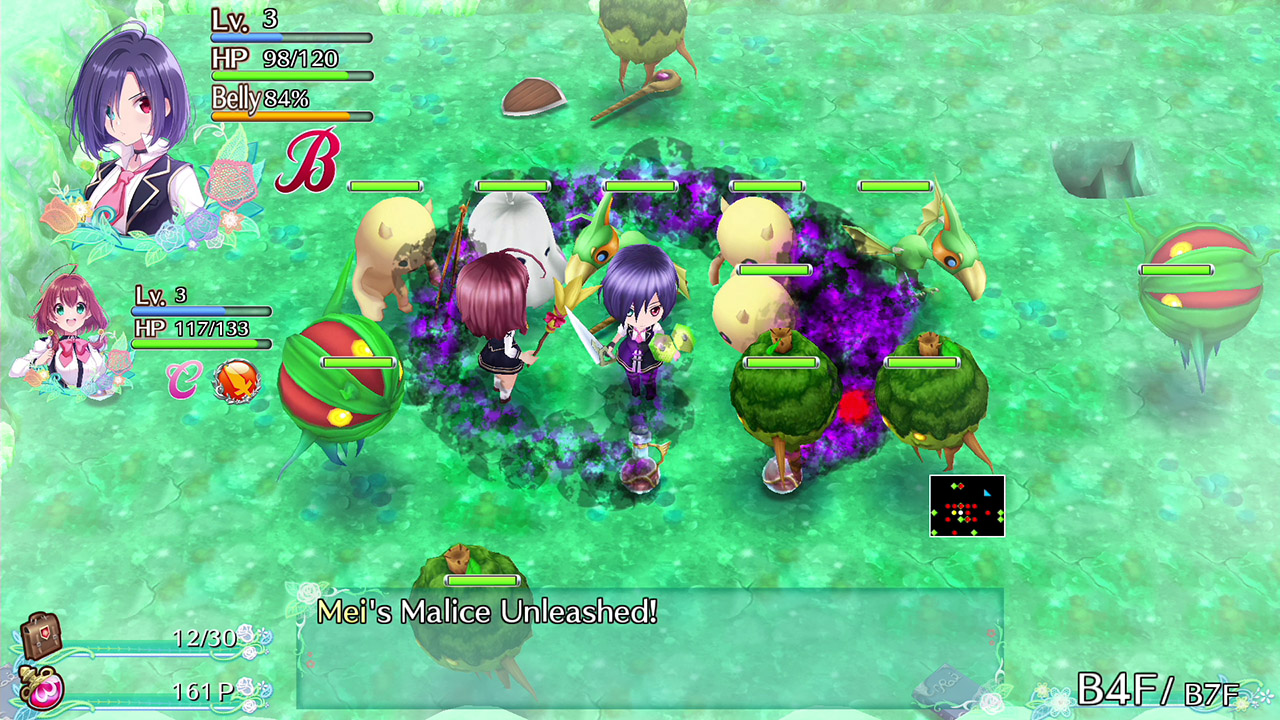 Other ways around not making it an absolute chore to get through each dungeon, however, is that you may get lucky enough to find purses or a GPS. Purses can be used a couple of different ways, like being able to take it with you as you store stuff in it since your regular inventory space is extremely limited, or stuffing the purse with stuff and leaving it behind in case you die you can grab whatever you left behind as you start up your second (or twelfth) attempt. Sometimes purses will increase stats of an item if it’s a special kind of purse, but most of the time what I found was simply utilized for more inventory space. A GPS makes it so, say if you don’t have a purse, you can attach it to a certain item or weapon so you can be sure to find it in the future, either on another attempt or any future adventures. It gives players a chance to prioritize and plan, but with everything being procedurally generated to begin with, GPS, Purse, or not, you’re really leaving the chance to randomness, hoping for that next useful blip to show up on the map.

I certainly don’t mind a challenge, and, if anything, actually welcome them, but Omega Labyrinth Life is so excruciating at times it really is a matter of seeing how far one is willing to go for exploitation of the player, testing the control and desires of one’s mind for sequences that are otherwise trivial and don’t really offer much extra to an otherwise boring and unrewarding game. Omega Labyrinth Life has had a few games now and the complaints have been the same with each new entry, and having this copy-and-paste method with its gameplay and simply switching up the girls and designs with each installment isn’t an excuse to keep avoiding simple quality of life enhancements, a more refined user interface, and some more thought put into its banal gameplay. The stories themselves are simple but fine, the characters overall likable, and the setting is flexible and colorful, but Omega Labyrinth Life continues to feel like a visual novel that tries too hard to be something more and suffers for it. It’s a mixture of Rosario Vampire, Kiss x Sis, and Shuffle! when it comes to vibe and presentation, which it does extremely well, but the rest is an afterthought as a way to “fill in the gap” to make the game feel whole. In Omega Labyrinth Life’s case, even if something is entirely encased, it doesn’t keep it from being hollow.

Omega Labyrinth Life isn’t exactly hitting any big marks when it comes to dungeon crawling and rogue-lites, and I’m pretty sure it’s self aware of the fact since it relies heavily on the ecchi nature of its dialogue and sequences. Omega Labyrinth in general has always been a not-so-great but not-so-bad series that admittedly mostly nails its humor and fan-service to save its uninspired gameplay and mechanics, but Omega Labyrinth Life suffers from feeling “last-gen” and being boring for the bulk of it. If Omega Labyrinth Life was a visual novel instead – and with its extensive dialogue it certainly isn’t afraid to be – the game would have been a rather decent pickup thanks to its likable characters, hilarious script, and simple story. In the end, what we end up getting are poorly laid out dungeons with sub-par animations that you ultimately just want to run through so you can continue the story and not have to deal with the unrewarding treks through dolomite and shale that’s made even more daunting by the idea of having to redo it all from scratch because of the game’s random elements.

Omega Labyrinth Life review copy provided by D3Publisher for the purposes of this review.